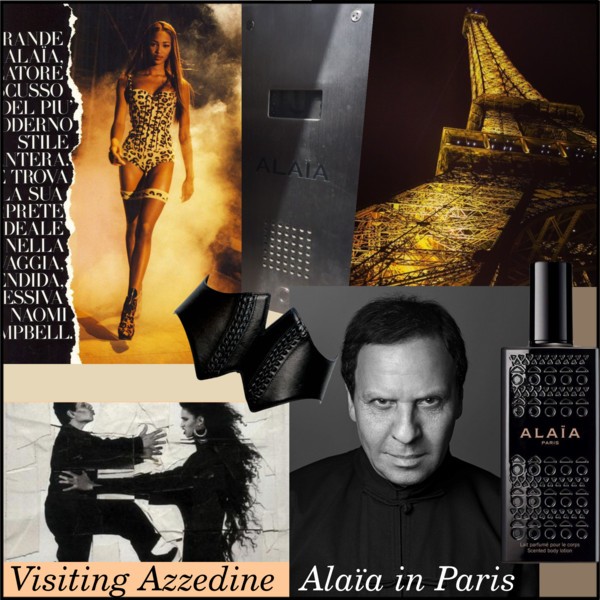 Today, my thoughts are with the people of Paris. Standing in solidarity with the French, I am appalled by yesterday’s heinous and immoral acts. So many amazing people live in the City of Lights and I am wishing all of them lots of strength. One of them is Azzedine Alaïa whom I met recently.

“It is Alaïa or not Alaïa! If it is not, you cannot negotiate.” 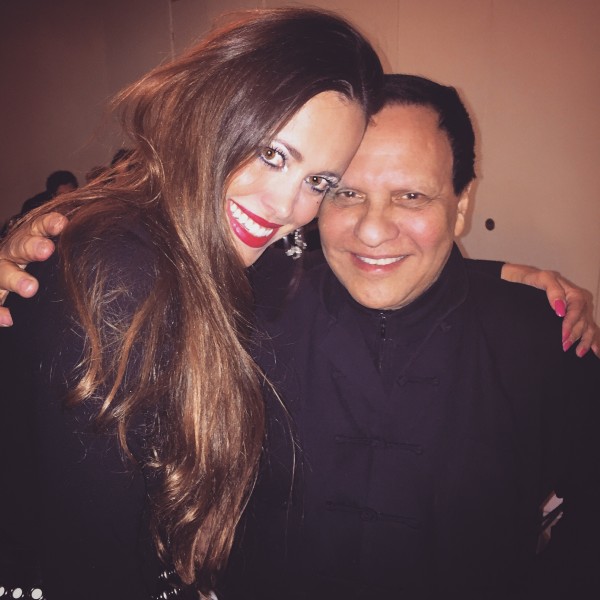 Rue de Moussy in the Marais district of Paris, a very unlikely location for a high end fashion store. This has been the address of Azzedine Alaïa’s Maison since over 20 years. It is home to the ateliers, the showroom, the store, an art gallery, his apartment, a hotel with three rooms and the famous kitchen where he eats together with his employees every day and where he welcomed my humble self for dinner. Famous artist and longtime friend Julian Schnabel designed some furniture for the space, such as a massive cashiers’ desk, embellished with the initials, “A.A.”. 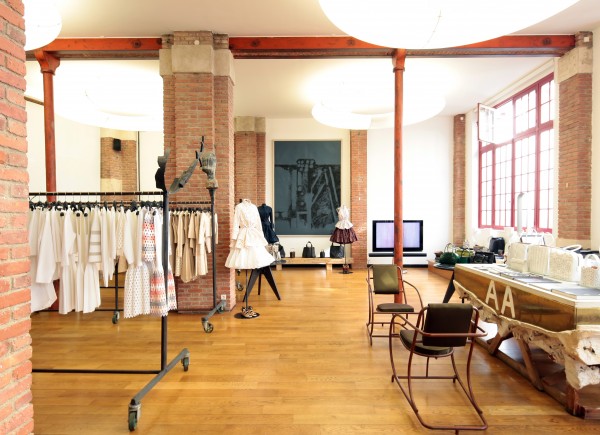 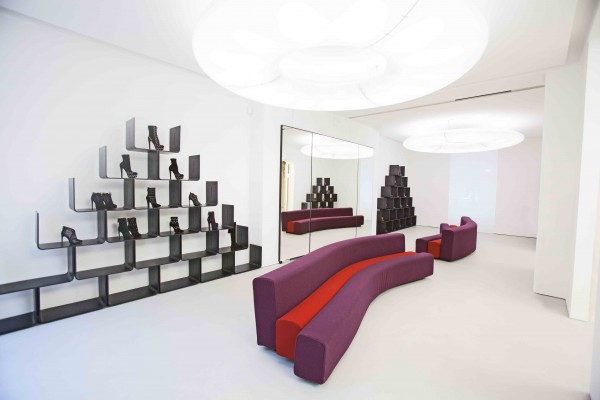 Housed in an 18th-century mansion, the new Alaïa store at 5 Rue de Marignan.

Before I arrive at the Alaïa temple, I had visited the second store on Rue Marignan which has been open since September 2013. It is quite the opposite on three floors, white, majestic, very artsy and clean, filled with the iconic pieces Azzedine is known for. You might say that he is one of the last couturiers. He is the master of tailoring. I haven’t seen one woman in my life that hasn’t looked good in an Alaïa dress and a pair of Alaïa shoes. 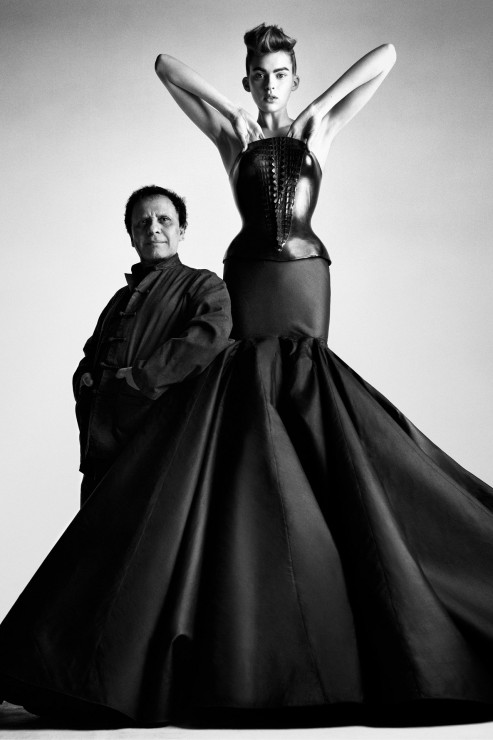 It is an amazing success story: born in February 1940 as the son of Tunisian farmers, he got inspired for his love of couture by his twin sister. He attended the École des Beaux-Arts in Tunis and studied sculpture which helped him define the silhouette of the modern woman. He had worked at Christian Dior, Guy Laroche and Thierry Mugler before opening his first own atelier in the late 1970s. There is no doubt, Azzedine Alaïa has made the sexiest clothes for the most stunning women on the planet, has rejected corporate fashion and become highly acclaimed among critics, designers – even first ladies. For me, it is a story of someone who has always stayed true to himself and has never given up on his own dreams and values, no matter how much more difficult it got because of this attitude. Being particularly successful since the 1980s, he is mostly famous for his tight fitting curve-hugging clothes and second-skin styles with complex seams and snaking zippers. Thanks to him, leather and Lycra have been elevated to the world of high fashion. 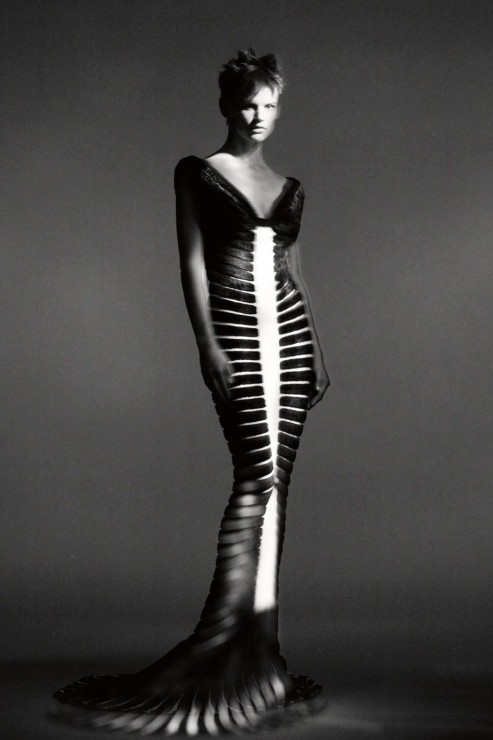 Mr. Alaïa once said: “A woman is like an actress, she’s always onstage. She has to look great to feel good. If she’s going to wear clothes by a designer, … then the clothes should make something happen, something unexpected. The dress has to be part of her, she has to feel it on her body. … I prefer the woman to be seen rather than the outfit. Her head, her body, her hands — the garment is there to cover her, to underline something, and make her beautiful.“

Alaïa’s ability to flatter a woman’s body is unparalleled, his creations are timeless. I have been collecting his designs for over twenty years and not one of my pieces seems outdated. 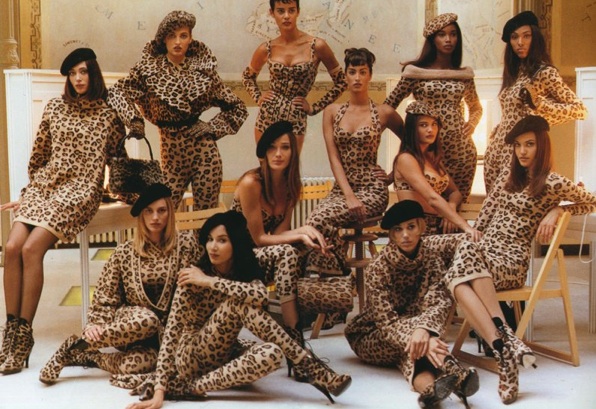 He likes swimming against the tide. Whereas all designers follow the fashion week schedules, Mr. Alaïa premieres his collections at his own rhythm, in private défilés since over a decade now. He is openly not a fan of Karl Lagerfeld and had a big fall out with Anna Wintour who hadn’t included the designer’s work in the 2009 Met’s Model As Muse exhibition – which she had organized.

Azzedine Alaïa plays by his own rules. The tiny designer is used to make all the decisions himself. For him, being independent and putting all the effort in his creativity is the key to success. “It’s ready, when it’s ready.” Now, after over 30 years in business, he takes his kingdom to new heights with the launch of his first fragrance «Alaïa». Like an iconic dress of him, he wanted it to be like a second skin. Timeless, for the Alaïa woman, discreet and not vulgar. He created a team of four people to come up with the perfect scent. His longtime friend Carla Sozzani, founder of 10 Corso Como in Milan, famous fashion photographer Paolo Roversi, the French designer Martin Szekely, who created the bottle and last but not least Marie Salamagne, the nose behind it. 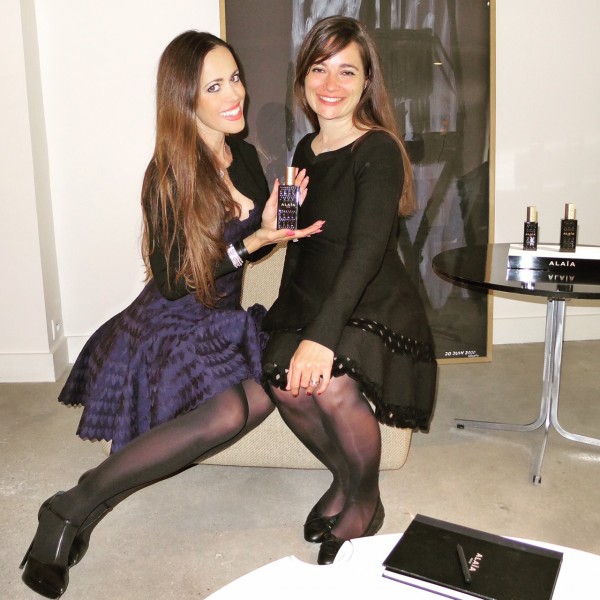 Marie Salamagne with me

For her it was an unusual encounter with a designer. Marie explains to me: “Once a month we met and discussed what was going to be the fragrance. Mr. Alaïa was were interested to interpret his childhood memories that he had of the smell of fresh water. He had this clear souvenir in mind of cold water running down the hot walls of his family house. Therefore he wanted the fragrance to show exactly this contrast, a mix of cool and warm notes at one.” He was very clear about his vision: “It is Alaïa or not Alaïa! If it is not, you cannot negotiate.“ 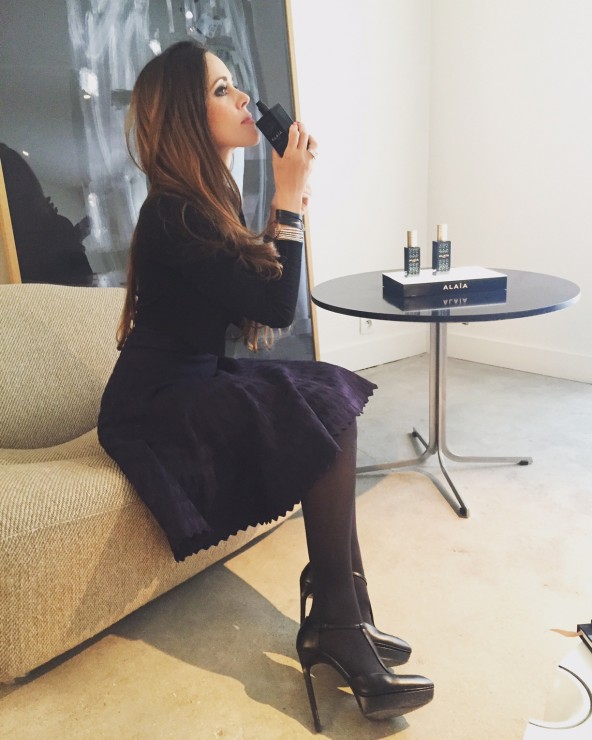 Marie Salamagne used very fresh airy top notes to give this watery feeling that is transparent and pure. The idea to use pink pepper to add more lightness came from Mr. Alaïa himself. The second impression is floral, but in an abstract and not invasive way, built on peony and freesia. The base notes are warm and all about bare skin created through animal notes and musk. 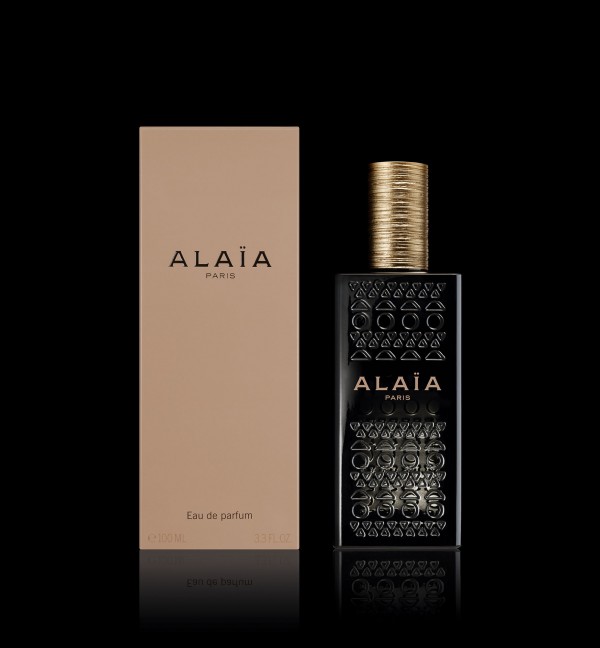 The bottle is all about the same contrasting elements. Built like a sculpture, it resembles the iconic perforated cut used for his leather pieces. It is opaque black but when you hold it into the light, it becomes see-through. The packaging itself plays with the famous nude color, the color of skin that Azzedine Alaïa loves to work with. Personally speaking, I had a clear idea in mind of how «Alaïa» would smell like and the new fragrance has totally surpassed all of my expectations. It is different like the house of Alaïa is, yet timeless and unexpected. The designer was very clear about his vision: “It is Alaïa or not Alaïa! If it is not, you cannot negotiate.“

It was an amazing experience meeting Mr Alaïa himself. He is such a sweetheart!
Below are some more impressions of my time with him. Heading to dinner in head to toe Alaïa Inside the Rue de Moussy store. 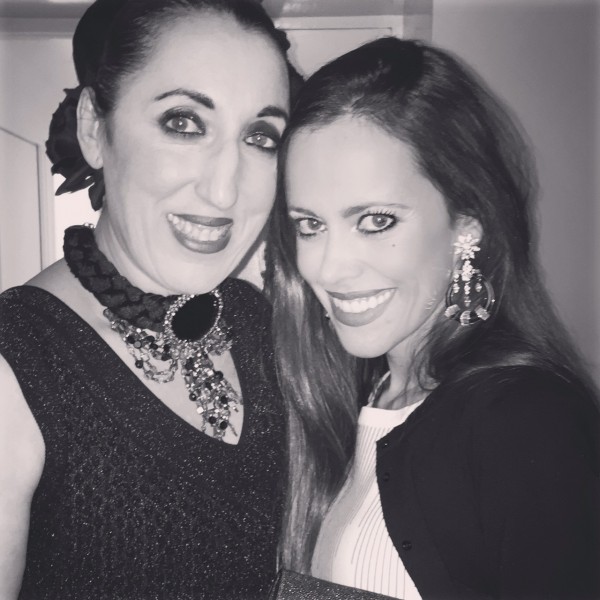 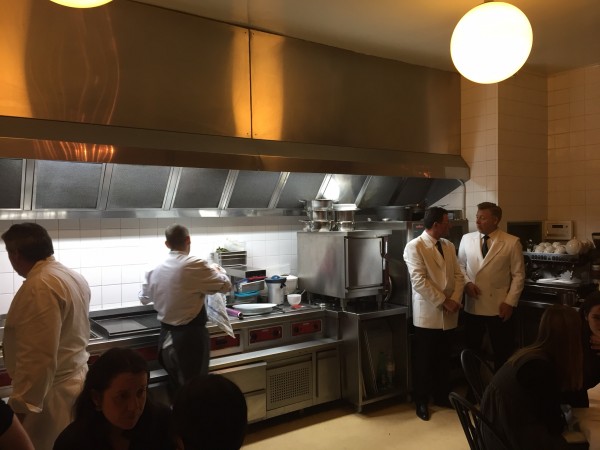 One of the three hotel rooms 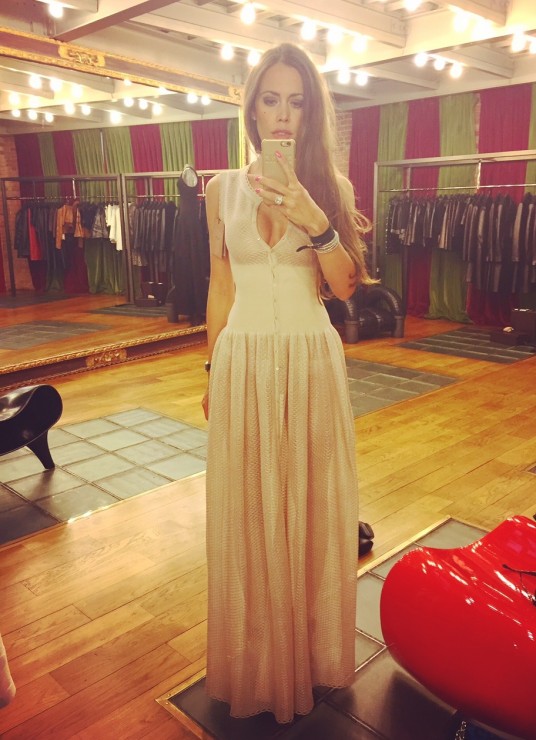 Trying the amazing gown that I wore to my friend’s wedding in Capri. 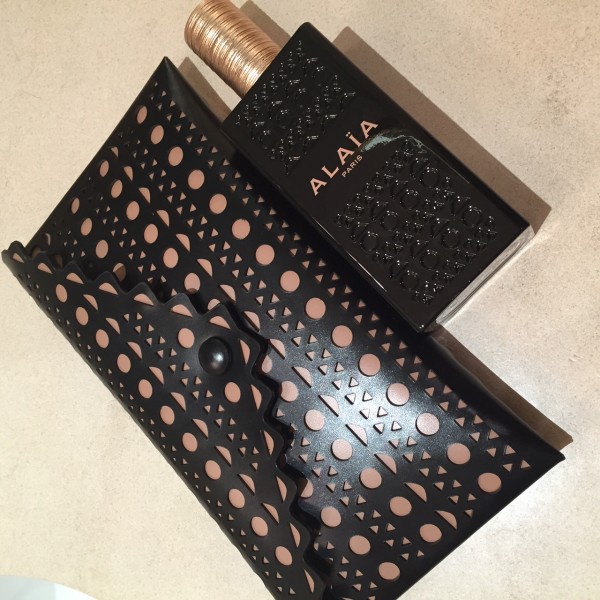 A lovely gift from Mr Alaïa: the laser-cut leather clutch. The stairs inside the Rue de Marignan store. 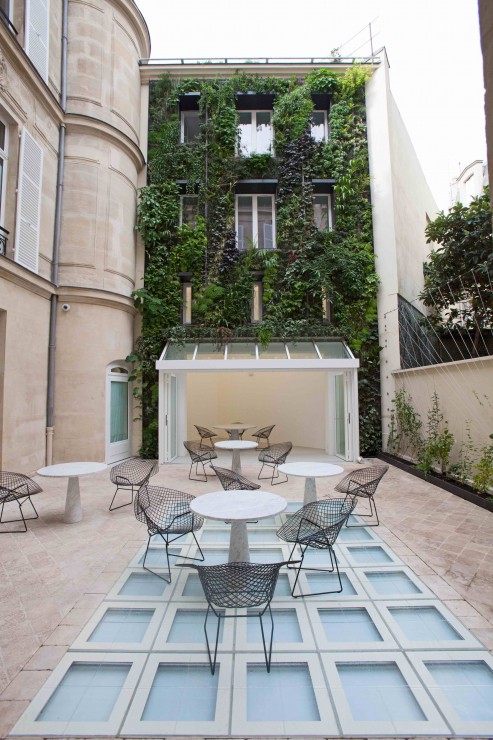