Thom Browne is the darling of the fashion community. The shrunken suit silhouette – narrow lapels and short-cropped trousers, meticulously tailored – is his signature look.
Since he founded his own line in 2001, the US designer has transformed the direction of menswear, a world in which change happens at a glacial pace. Especially American men tend to wear clothes that are too big. Thom, an admirer of European tailoring, has created a new exaggerated take on the staples of a man’s wardrobe.

He got his start in fashion by designing for Club Monaco in the Nineties. In 2006, Browne was tapped to design Brooks Brothers’ more fashion-focused Black Fleece line, and in 2008 he was named creative director for Moncler Gamme Bleu.

For his menswear S/S 2011 collection, the designer made his Paris Fashion week runway debut with his probably most commercial show due to date. From his famous classic gray flannel to a shimmering sequined plaid, all interpreted with bermuda shorts and kneesocks underneath, he proofed his talent for proportional play and focused on his craft, his love for quality. 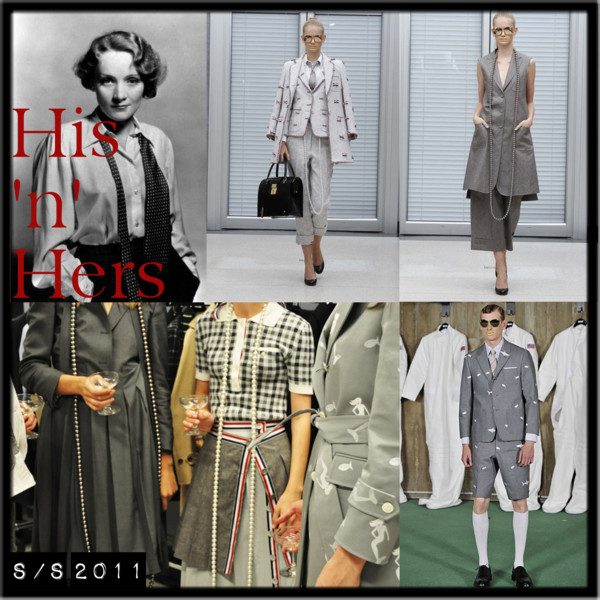 And good news is, for S/S 2011, Thom Browne is making a foray into womenswear with an amazing collection. Women look great in tailoring and the clothes boast the juxtaposition of traditional fabrications remixed with a his special kind of humour and exaggerations.

Thom Browne’s statement regarding his new womenswear collection: „I’m looking at it the same as my mens, like looking at really well-made clothes for girls that are tailoring-inspired but interesting and provocative, not just another collection of clothing for girls.“

One thing is clear, Thom Browne is poised to be as big as his suits are small!