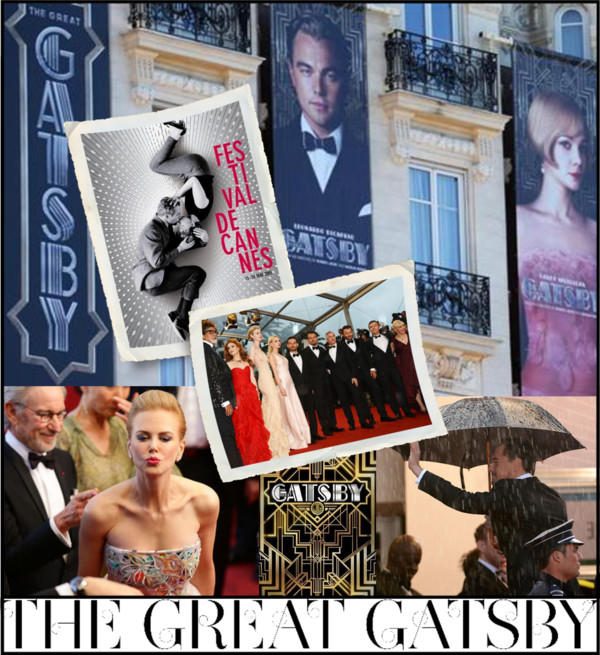 Last night, the premiere of THE GREAT GATSBY marked the official opening of the 66th Cannes Film Festival with such fanfare Jay Gatsby would be proud. Unfortunately, I couldn’t accept the exclusive invite to attend this amazing event (Remember last year?) because of another ongoing project but great news is that I will be flying to Cannes next week to live once more this gorgeous red carpet feeling with Chopard. 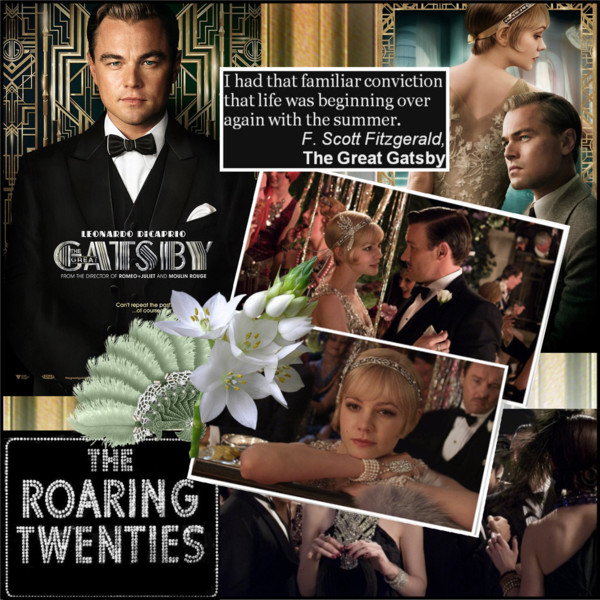 It’s definitely one of the biggest movies of 2013, directed by Baz Luhrmann. The film adaptation of F. Scott Fitzgerald‘s famous The Great Gatsby stars Leonardo DiCaprio as 1920s millionaire Jay Gatsby in the part that Robert Redford portrayed in the 1974 version of the film. The 2013 edition is narrated by Nick Carraway (Tobey Maguire) and Carey Mulligan plays Gatsby’s obsession Daisy Buchanan, along with Joel Edgerton as her husband.

„The Great Gatsby” follows Fitzgerald-like, would-be writer Nick Carraway as he leaves the Midwest and comes to New York City in the spring of 1922, an era of loosening morals, glittering jazz, bootleg kings, and sky-rocketing stocks. Chasing his own American Dream, Nick lands next door to a mysterious, party-giving millionaire, Jay Gatsby, and across the bay from his cousin, Daisy, and her philandering, blue-blooded husband, Tom Buchanan. It is thus that Nick is drawn into the captivating world of the super rich, their illusions, loves and deceits. As Nick bears witness, within and without of the world he inhabits, he pens a tale of impossible love, incorruptible dreams and high-octane tragedy, and holds a mirror to our own modern times and struggles.

The new blockbuster is the perfect example that there is ongoing dialogue within the worlds of fashion, art, film and architecture. The lavish throwback to the “Roaring Twenties” has already been a huge trend for S/S 2012 (for the previous post please click here). 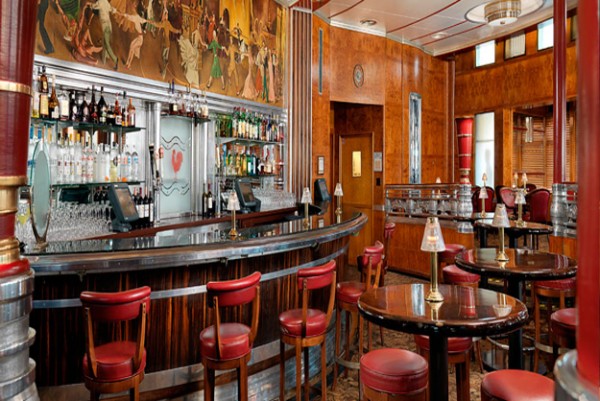 Harrods in London has taken inspiration from the new adaptation with a 1920s jazz-themed cocktail bar to celebrate the release of movie. At the famous department store, you can also shop ‘The Twenties’ return with a roar, as fringing and Art-Deco detailing add edge to architectural shapes. As Gatsby fever hits our screens with its champagne towers and shimmering wardrobe, has there ever been a better time to celebrate the beginning of the summer season?

Keeping this in mind, it is time to take a closer look at the magnificent costumes and jewels in Luhrmann’s film adaptation of the F. Scott Fitzgerald classic.

Total pairs of stockings/pantyhose/garterbelts from Fogal: 1,080 Total number of Prada party dresses: 40 Total number of crystals provided by Swarovski: 288,000 Most number of hair and make-up applications on any one day, for party scenes: 76 Total items of men’s formalwear and daywear produced for background talent by Brooks Bros.: 2,291 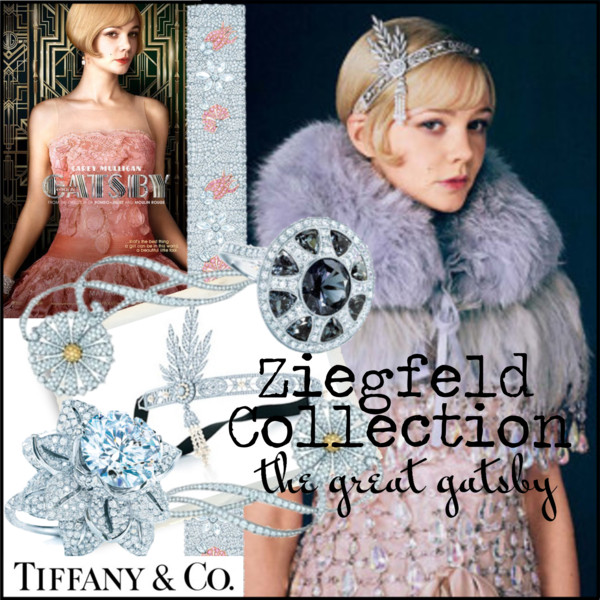 Tiffany & Co., who counted F. Scott Fitzgerald himself amongst its clientele, was responsible for the spectacular jewels in the film. The cinematic collection is inspired by pieces from the brand’s archive, genuine products of the creative prosperity of the 1920s which have also inspired a new Gatsby-esque line for Tiffany & Co., the recently launched Ziegfeld range. 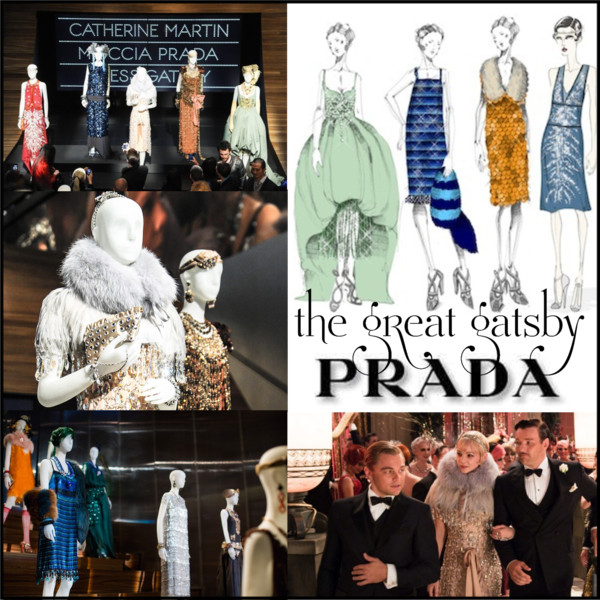 Miuccia Prada was behind the flappers dresses and ballgowns for the cast. The Italian designer teamed up with costume designer Catherine Martin to create a bespoke collection of 40 Roaring Twenties-style pieces, inspired by selected runway looks from the last 20 years. The glittering re-imagining of F. Scott Fitzgerald’s jazz-age classic stars. In the film the costumes take a leading role: shimmering silk gowns embroidered with crystal and sequins; velvets, furs and dancing fringing; flickering shades of emerald, jade, topaz and gold. 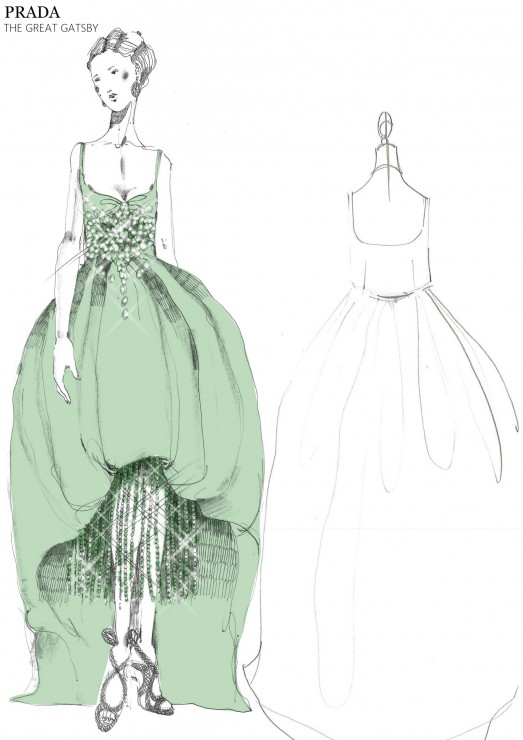 “Our collaboration with Prada recalls the European flair that was emerging amongst the aristocratic East Coast crowds in the 1920s” says Martin. “The fashions of the time saw the development of a dichotomy between those who aspired to the privileged, Ivy League look of wealthy Long Island and those who were aspiring to European glamour, sophistication and decadence. Our collaborations with Prada reflect the collision of these two aesthetics.” 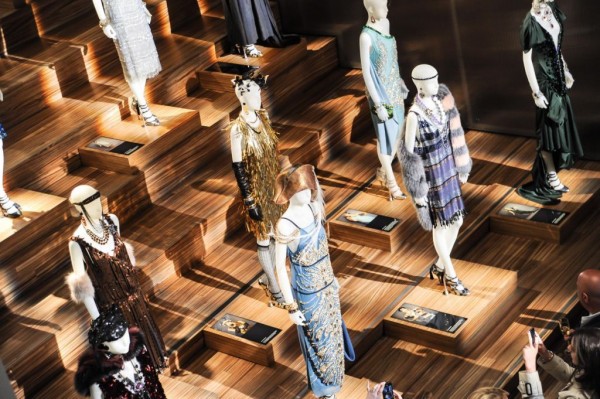 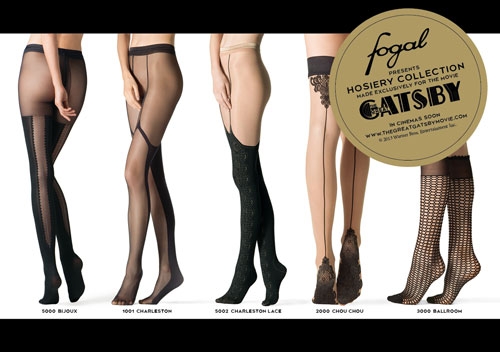 I am in love with Fogal‘s limited edition hosiery collection made exclusively for The Great Gatsby movie. This pure 20’s glamour is now available in all Fogal stores. 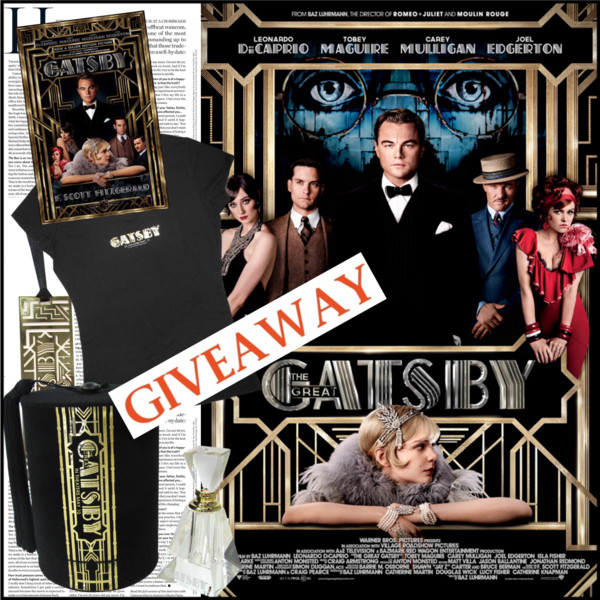 Excited to see Leonardo DiCaprio, Carey Mulligan and Tobey Maguire in The Great Gatsby? I am inviting you to join today’s contest where you can win four amazing movie-inspired giveaways. A tee, a perfume bottle, a book mark and the movie tie-in book. 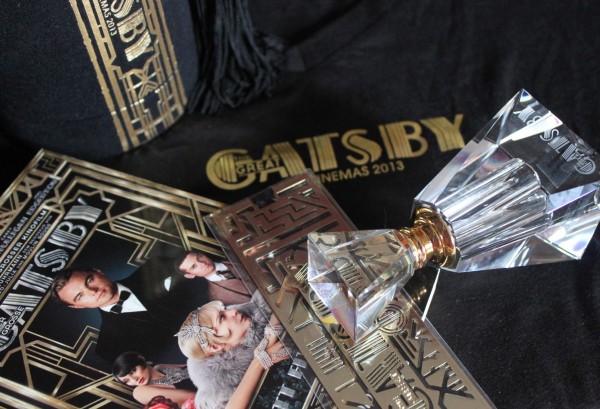 This contest is open to everyone. To participate in the contest, please send me an e-mail with your postal address and the header “The Great Gatsby” to . All entries must be received until May 25, 2013. No purchase or payment of any kind is necessary to enter or win this contest. By entering this contest, entrants accept and agree to be bound by these official rules.

The Great Gatsby hits theatres today in Switzerland. Check out the trailer below!