„Every time you look at a great painting, you’ve literally took a piece of the artist’s soul.“
– Sylvester Stallone

Sylvester Stallone with me in front of his artwork "Best of Life", 1989, which is my absolute favourite, a collage of fan letters.

This morning, I attended a very interesting opening at the well-known Galerie Gmurzynska in St. Moritz in the presence of the artist himself: Sylvester Stallone 35 Years of Painting. In case that you are wondering, I am talking about the “Stallone”, the “Rambo”.

The exhibition is a retrospective of his work. About 30 pictures will be presented, documenting different periods of Sly’s creative work.

The  famous actor has started painting in his teens. His early pieces, which he signed “Mike Stallone”, were experimental. Due to financial reasons he then worked as an author until he started a career as an actor. In 1976 he made his breakthrough as “Rocky”, started painting again and continued to do so until today. During the seventies and eighties, Stallone’s art was very expressive and morbid. Amongst others, his paintings were influenced by the death of his manager  to handle the stroke of fate. The work he made during this period was graphic, flat, often brightly coloured and still quite illlustrative. 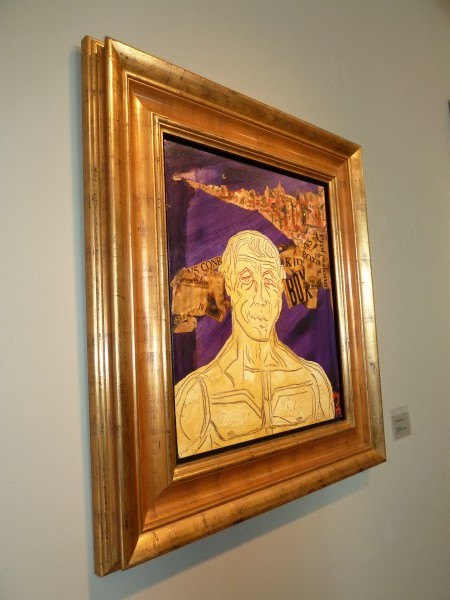 A change in his style began 1989/1990. He got deeper into art, studied closely contemporary art and painters like Picasso, Gerhard Richter and Anselm Kiefer. He looked into abstract work of Mark Rotho and developed a unique style for himself: He produced expressive, profound and expressionistic works, sometimes modified self portraits, sometimes pictures playing with words.
Smooth strokes instead of hard blows… 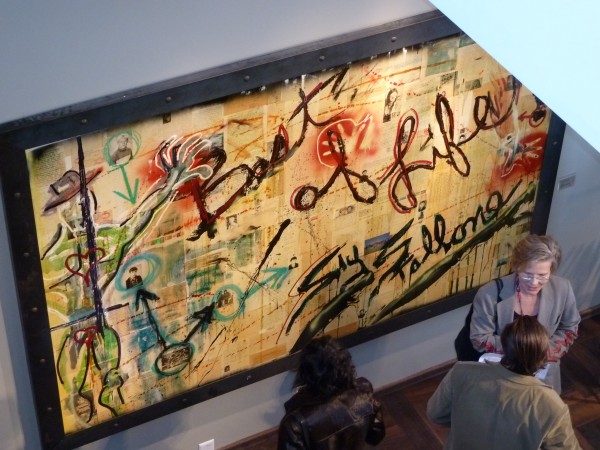 Donald Kuspit, one of America’s most renowed art scholars, wrote an essay about Stallone’s art in which he states that Stallone is no longer acting or pretending when he is painting, but honestly and openly himself. He is no longer Rambo , the straight-shooter who never misses, or Rocky, an everyday guy who made it, but in search of his missing self – the self he may have lost when he played those proud creations. His paintings are more emotionally realistic than his unrealistic heroes.

Stallone told Donald Kuspit that the cutting of the frames symbolizes the cutting of frames and scenes from his movies by various editors. It upset him greatly, which is one reason he does not completely frame nor edit his paintings –does not hem them in. 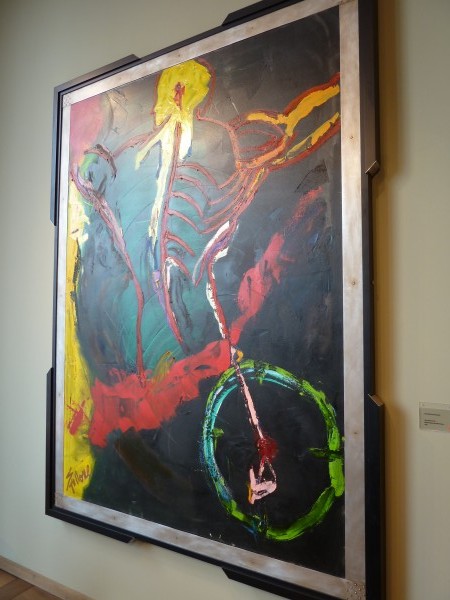 The artworks will be exposed at Galerie Gmurzynska in St. Moritz from February 19th until March 15th. Subsequent to the show in Switzerland, Stallone’s art will be exhibited at the State Russian Museum, St. Petersburg. The prices for Stallone’s artworks are approximately between $50.000-$150.000. 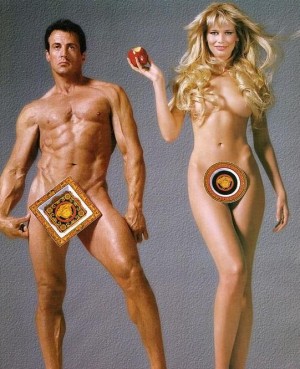 Stallone is a very impressive and expressive man with a voice that is truly to die for. The father of five children will turn 65 in July and is said to have an IQ of 141.

He was very sweet and answered the question if he could imagine to start painting with Arnold Schwarzenegger like this: „Wouldn’t that be something?! Arnold paints, too but he is not showing his artwork to the public. I painted once with my wife, but this was already complicated enough…”.

In 1995, he modeled for Gianni Versace to promote his new home collection. The photos were taken by Richard Avedon and I still love that one of Claudia Schiffer and Sly both stripped down.