From Monogram to Monogram Empreinte, from canvas to leather…
The journey made by Louis Vuitton’s celebrated Speedy bag is short but significant. The Speedy 25 Bandoulière, the smallest version of the Speedy with its recently added shoulder strap, is now available in Monogram Empreinte – the first icon to join this subtly sophisticated calf leather line, whose embossed Monogram pattern is the symbolic imprint of Louis Vuitton’s heritage and craftsmanship.

The arrival of the Speedy, the original and quintessential city bag, represents the consecration of Monogram Empreinte, a collection at once classic and contemporary, young in spirit yet chic at any age. While retaining its iconic shape, the Speedy 25 Bandoulière has acquired new details that are typically Monogram Empreinte, notably outsize zipper pulls and bold brass rivets.
Diminutive yet deceptively spacious, as versatile as it is stylish, the Speedy 25 Bandoulière can be worn in different ways: casually slung across the body or draped gracefully over the shoulder on its adjustable, detachable shoulder strap, or else carried in the hand or hooked over the arm by its emblematic Toron handles.

To the four existing colours of Monogram Empreinte – Infini, a deep midnight blue; Orient, a burnt orange; Aube, a dark violet; Aurore, a rich raspberry – the Speedy 25 Bandoulière adds a fifth: Terre, a warm chocolate brown that is another discreet yet distinctive reminder of the history of Louis Vuitton.

Impossible though it may be now to imagine, this icon among icons was not always called the Speedy. Born in the 1930s, the little sister of the legendary Keepall was originally christened the “Express”, in reference to that era’s passion for new and faster means of transportation.

It even, for a time, bore the name “Vernet”, after a street near Louis Vuitton’s home in Paris. Neither suited it quite so well as “Speedy”, the name by which it is now affectionately known at the four corners of the globe. 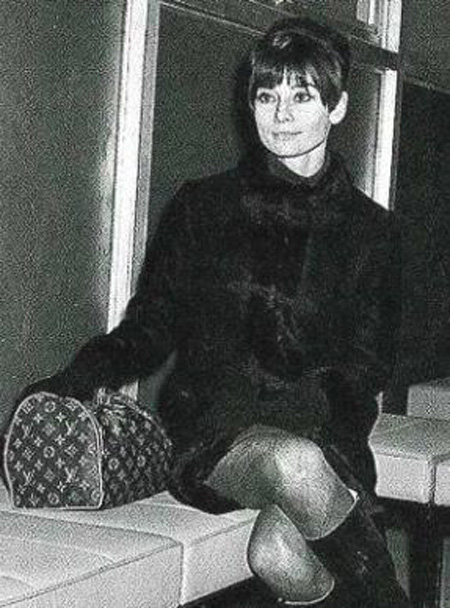 The Speedy 25 has a particularly fascinating history. In 1965, Audrey Hepburn, a loyal Louis Vuitton customer, asked Henri-Louis Vuitton to create a smaller version of the Speedy as a Special Order. The Speedy 25 became a constant companion of this most stylish of stars, as it has for countless women since.