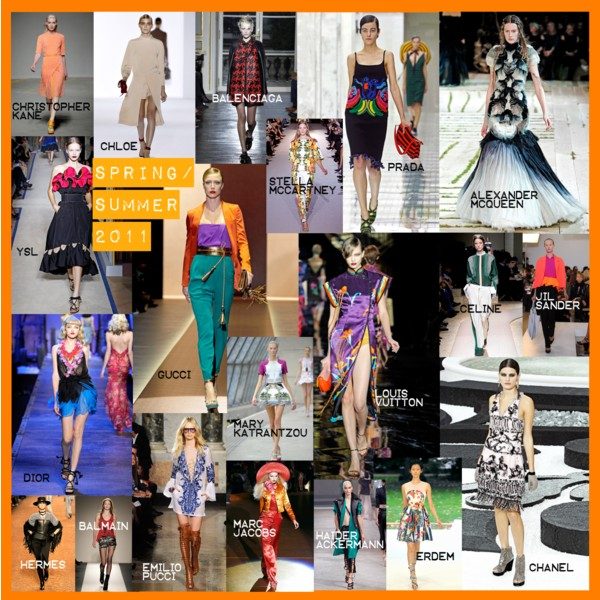 Today, I would like to give you a preview of my Top 20 runway shows for S/S 2011 that I consider the key collections for the next season.

The overall spirit was light-hearted and positive sweeping away the last bit of sobriety. The designers’ colouring box was bright and vibrant with lots of neon shades, vibrant stripes and bold tones.  Many tributes to YSL as well as the 70s were spotted, along with biker and punk themes, floral prints and embroideries, Marrakesh and Shanghai references and pure clean white. Enjoy! 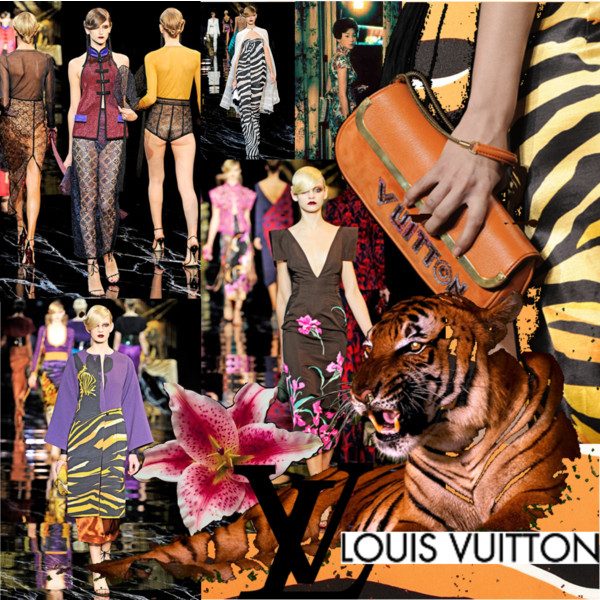 LOUIS VUITTON: Marc Jacobs’ S/S 2011 show for the French fashion house was a hell of a lot of fun, brazen in decadence. A colourful free-spirited collection for the camped-up China girl that loves high-voltage chic. Inspirations from 1930 Shanghai’s Art Deco style to a 70’s New York disco atmosphere were seen in the Cheongsam dresses and bold tiger stripes.
As for me one of my favourites this season. 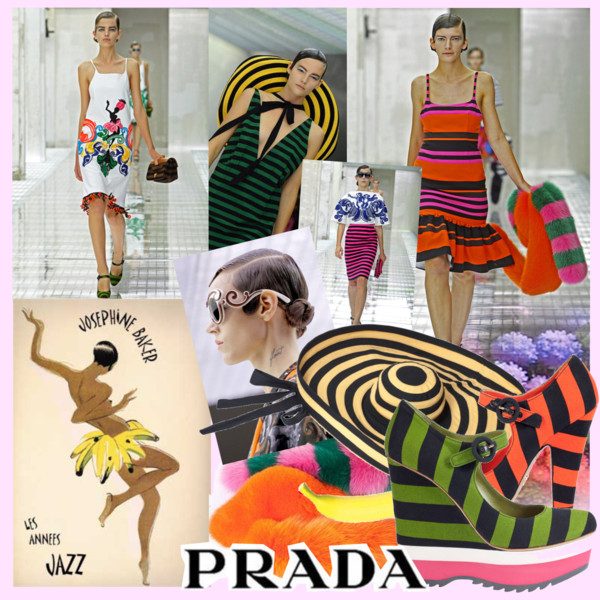 PRADA: Miuccia Prada’s message was crystal-clear: „It’s time to be bold“. Her ecclectic humours take on her S/S 2011 collection was visionary. Fake baroque paintings (Who would have ever imagined that baroque can be minimal?!), fluorescent stripes, Josephine Baker banana designs and Mexican sombreros lead to that iconic Prada-twist that likes to surprise us.
I am loving it!!!! 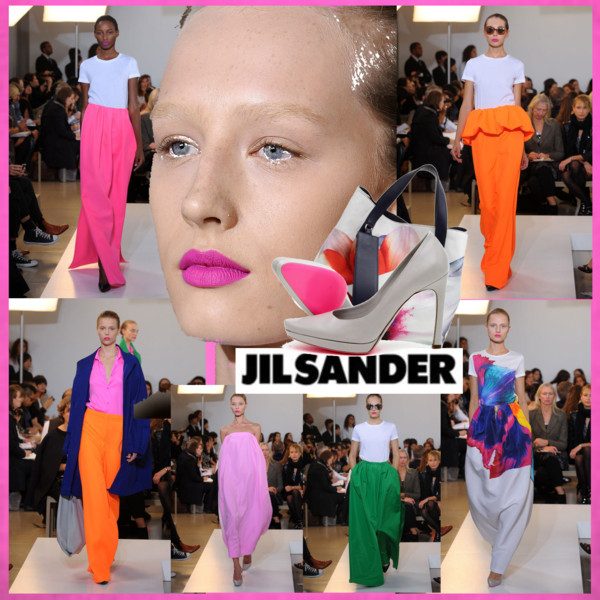 JIL SANDER: An implicit change to the Jil Sander woman, that was this collection about. Minimalism inversed into a modern maximalism that led to couture. Raf Simons surprised the fashion crowd with this exceptional S/S 2011 show.
Simple white tees dominated long, full skirts joined with YSL’s rich associations of colours. The shapes were reminiscent of Cristobal Balenciaga’s proportions. The apostel for minimalism, Raf Simons, showed us another optimistic side of the Sander woman without betraying the spirit of the label. Wow! And by the way, the fuchsia lips are gorgeous… 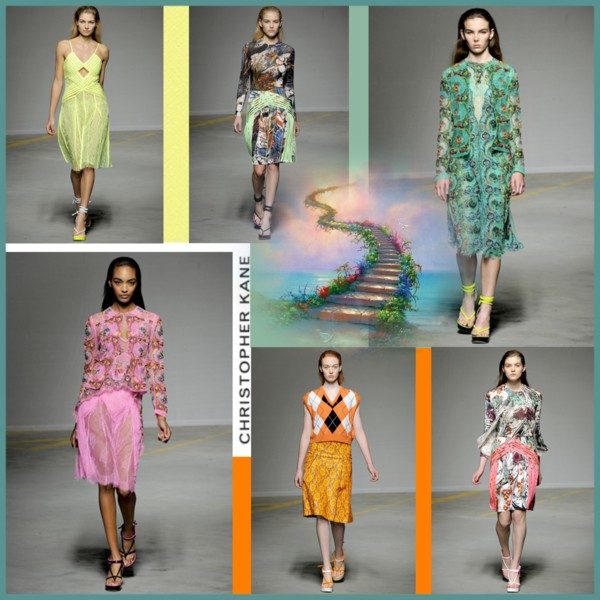 CHRISTOPHER KANE: „Princess Margaret on acid“, this is how Tammy described her brother’s S/S 2011 collection. It was an interesting vision of the future, brilliant and different, like the designer and his place in English fashion. Fluoresent colours and print motifs inspired by yakuza tattoos lightened up the classic and kind of formal pieces.
Watch out for Christopher, this guy is provoking trends! 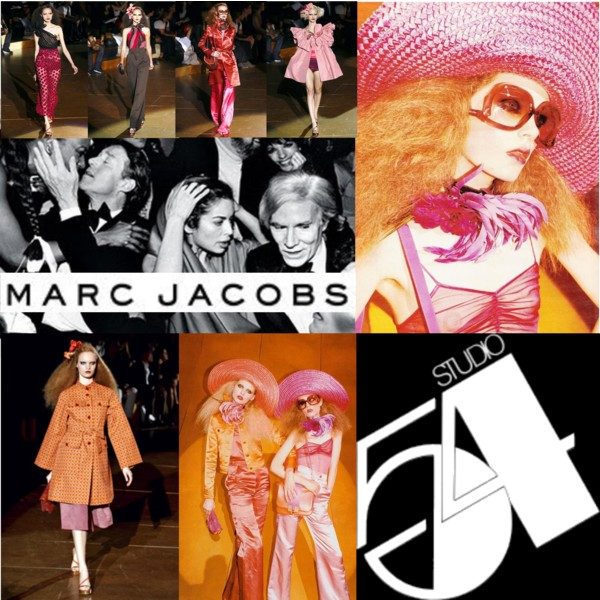 MARC JACOBS: There were many YSL references on the catwalks and Marc Jacobs was one of the first ones showing them in New York. By taking on the energy of the Studio 54 years and the ’70s, the brilliant American designer came up with one of his best collections, fresh, charming with a modern new spin, an ode to Missoni’s zigzag knits.
I cannot wait to get my hands on the peasant blouses and full skirts. My summer must-haves. 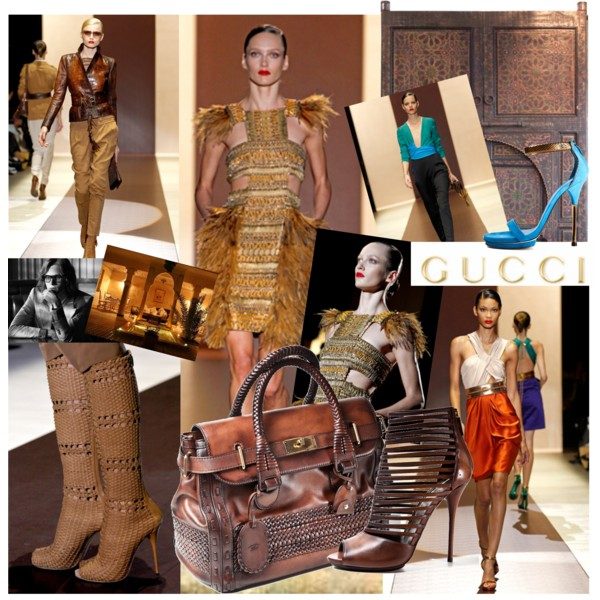 GUCCI: Yves Saint Laurent’s Marrakech years were in the air and a breeze of the ’70s omnipresent at Frida Giannini’s collection  for Gucci. Alternating between electric glamour, safari chic and ethnic touches, the Italian powerhouse continued to celebrate the female silhouette and its seductiveness. You cannot go wrong with this! 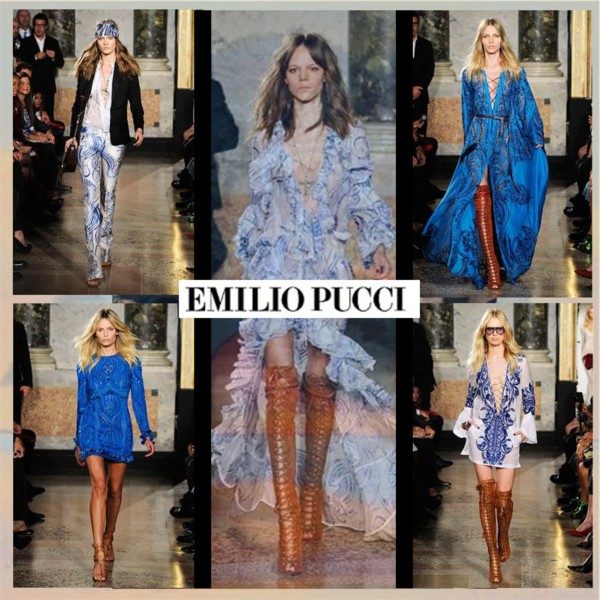 EMILIO PUCCI: A beautiful Greek Mediterranean vibe highlighted the collection that was seventies-inflected and mostly long. Peter Dundas knows his craft and the jetset girls will love his luxe hippie dresses worn with laced boots. Nonchalant, elegant, seductive details of which some were a little reminiscent of Yves Saint Laurent will make Pucci a bestseller this summer. 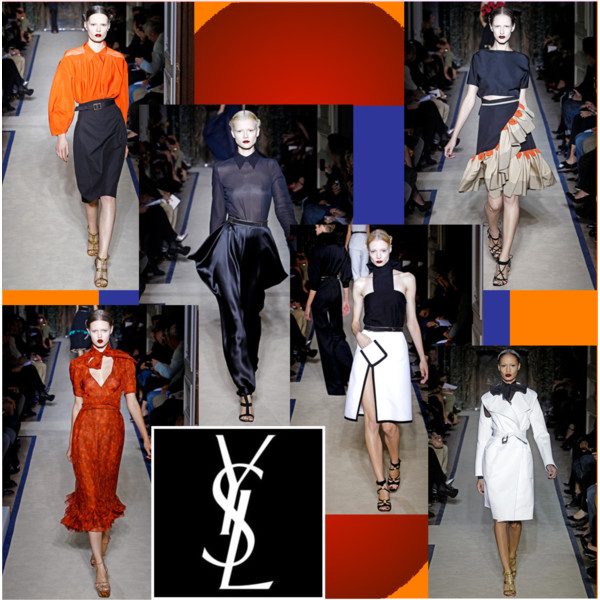 YVES SAINT LAURENT: The seventies are everywhere this summer and so is YSL. Thanks to the retrospective that was held this year in Paris, many designers were influenced by the epic Saint Laurent. But none could stake a more legitimate claim to the Master’s inspirations than Stefano Pilati’s work.
He revisited the codes of the fashion house one by one, „le smoking“, the famous palette of orange and pink, French blue, black and beige, abundant bows and the sophisticated tailleurs. I am so on for a trip down memory lane, and you? 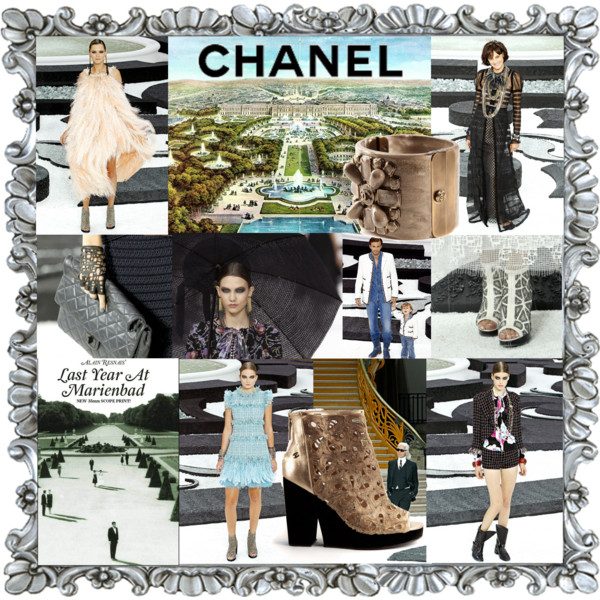 CHANEL: This time, Karl Lagerfeld took his inspiration from the early sixties movie Last Year at Marienbad and created a breathtakingly surreal setting. More than 80 models paraded through the ornamental garden with fountains, water features and gravel paths. The collection was so rich, full of couture details with dégradé chiffon florals, tweed patchwork, feathered edges and more. Just beautiful! 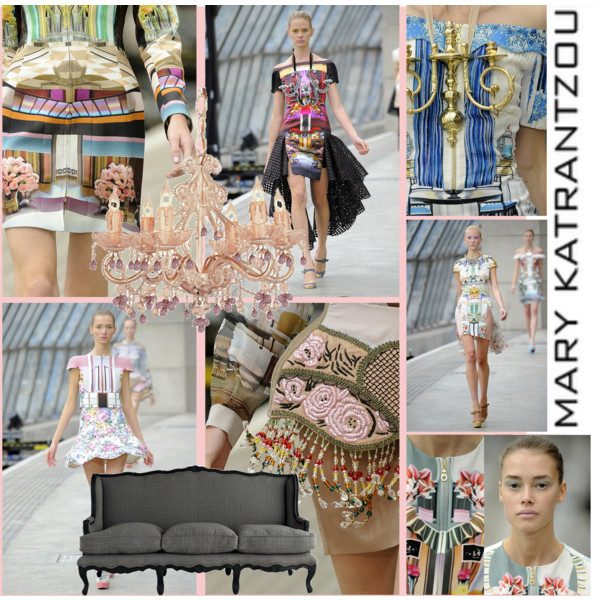 MARY KATRANTZOU: It was her first stand-alone show with which she won the Swiss Textiles Award 2010 in November. Mary Katrantzou is one of the hottest fashion newscomer with her groundbreaking creations. The designer of Greek origin worked in three dimensions and was inspired by the decors and backgrounds of the most beautiful of Guy Bourdin’s and Helmut Newton’s photos.
There was an almost hallucinatory depth to her digital printed clothes. The real revolution was how Mary modeled the shape to go with the graphics of interior designs. Are you up for wearing “room” this summer? 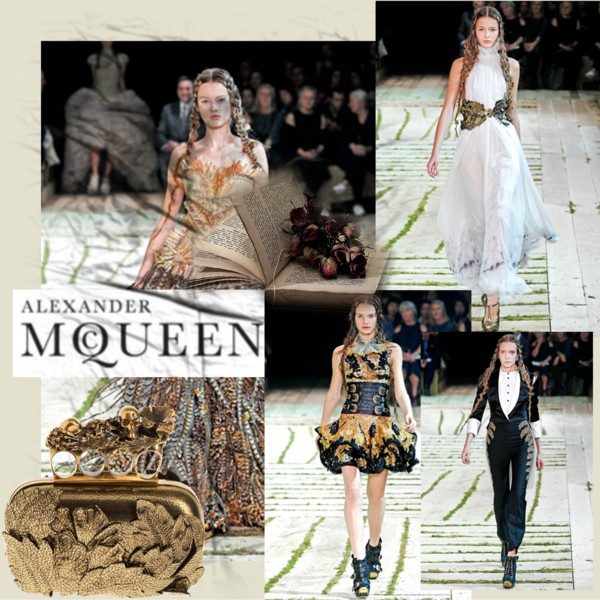 ALEXANDER MCQUEEN: Sarah Burton who had worked beside McQueen for 15 years, took over the cepter after the designer’s death last February. The S/S 2011 show, her first solo one, grabbed hold of his legacy and defined the same fantasia McQueen was so famous for. This time a hymn to nature, superb in its construction.
One of the biggest differences was that Burton softened the staging, a concept that was always so  vital to a McQueen show. It was a pleasure to see that there is a more feminine vision for the house but with the same theatrical love for detail. 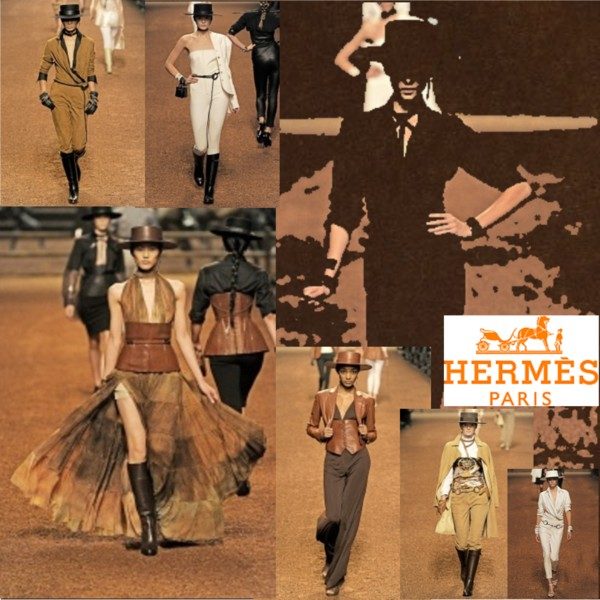 HERMES: Time to say good-bye for Jean-Paul Gaultier and he couldn’t have done it better. His last collection for the traditional French house boasted of master tailoring, sensuous glamour and leather at its finest. “Zorro in Andalusia” celebrates Hermès’ equestrian elegance heritage could have been the headline. Good luck to Lacoste defector Christophe Lemaire! Taking these luxurious reins seems to be quite difficult… 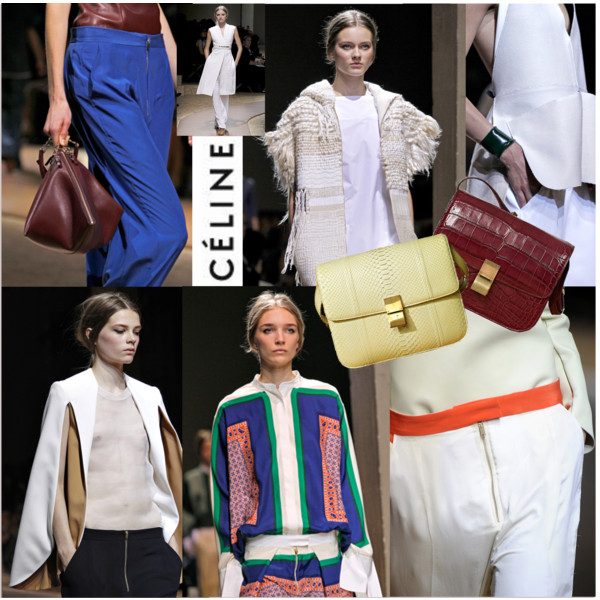 CELINE: The collection was once more strong in its remarkable simplicity even that Phoebe Philo laid her hands on artisanal effects like hand-woven silks, fringes and vibrant colours. Her motto „less is forever chic“ has determined the codes of her hugely influential designs. 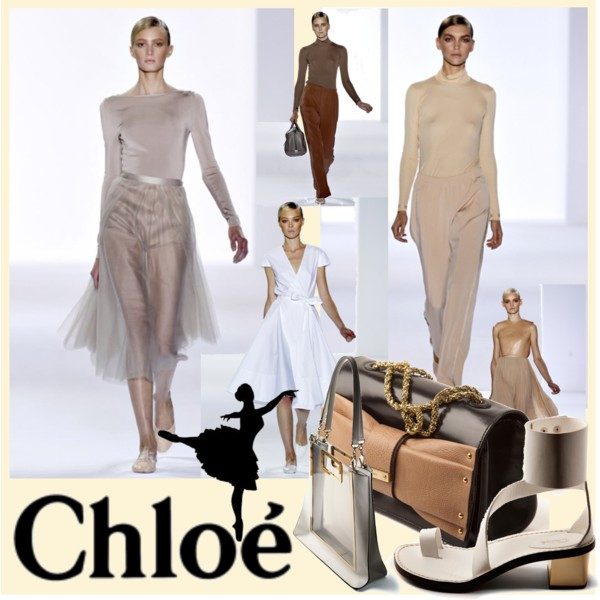 CHLOE: Minimalism at its best. Classic, timeless pieces that women can make their own and customise at will. The tutu-like skirts, reminiscent of the world of ballet, were among my favourites. Congrats, Hannah MacGibbon, for this lovely collection! 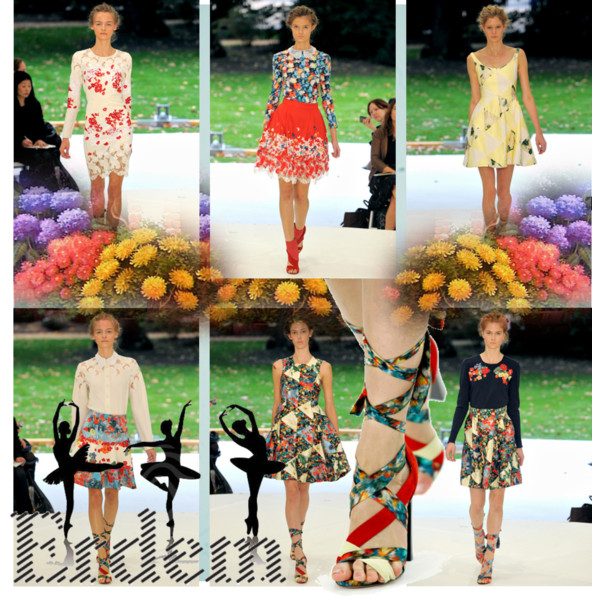 ERDEM: Erdem Moralioglu, the upcoming designer of Turkish origin, took his audience to Russia for his S/S 2011 presentation in a London park. He had been involved this summer with Victoria & Albert Museum’s Diaghilev and the Golden Age of the Ballets Russes, 1909-1920 exhibition.
The experience had been so inspiring that it shaped the substance of his collection where delicate dresses that clearly reflected the structure and flou of ballet costumes dominated the look. Once again floral motifs sprinkled the collection and were complemented by Nicholas Kirkwood’s gorgeous shoes tied up the calf like ballet slippers. I am sure that we will see much more of Erdem in the future. STELLA MCCARTNEY: Even that I have to admit that I prefered Stella’s cruise 2011 collection, I am always in love with her practical, easy chic. The mother of four knows what she is talking about. Her key pieces are ideal companions to feel good in, even her long skirts split up the thighs swing comfortably with class. First bananas at Prada, now grapefruits and lemons at Stella that put us in a good mood. Her suits in pastel colours were strong on the runway and denim made a boxy shape debut. Thumbs up! HAIDER ACKERMANN: One thing is for sure, the days that Haider Ackermann was only a fashion insider’s favourite secret are definitely over. His S/S 2011 collection was outstanding in its beauty. Origami folds, kimono jackets and obi belts were among the Asian references. Dramatic effects and strong colours for a glamorous red carpet moment. 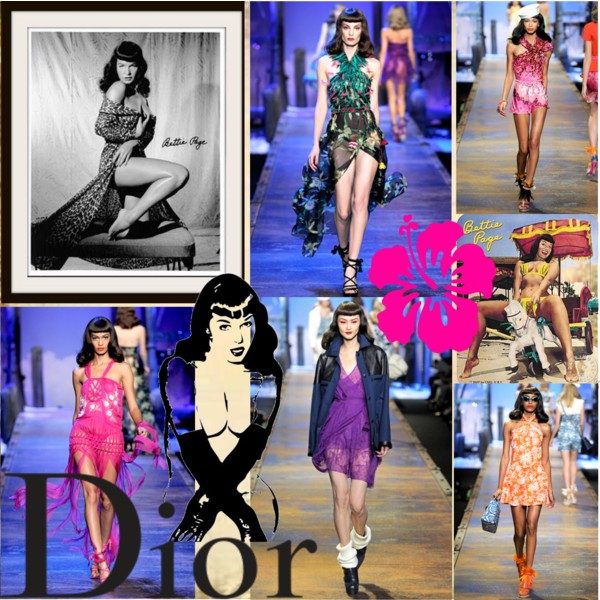 DIOR: Betty Page, the model from the 50s that invented the pin-up look, goes on vacation to Hawaii – this South Pacific-style fantasy dominated John Galliano’s collection for Dior. The colours and floral prints on exquisite chiffons, the ankles tied with satin, this island extravaganza put you immediately in the holiday mood. Very cute. BALENCIAGA: This was probably the most futuristic, unexpected and innovating collection of all. Nicolas Ghesquière defied the fashion codes and came up with new ones. His teddy boy-meets-punk masculinity was the reaction to a certain kind of sexiness. For him it was all about individuality. The talented fashion troublemaker used plasticized textures and couture techniques that were modernized with laser machine precision cuts.
It might take a while to adapt to the look but once you get it, you will be all over it! BALMAIN: Honestly, the time of Balmain might come to an end as there are always the same sharp-tailored rock allure pieces on the runway but I still love them so much.
This time, Christophe Decarnin shortened the shorts and minis as much as he could and looked for punk rebellion for inspiration. Studded and safety pinned biker jackets, bleached jeans and holey T-shirts were among his favourites. Let’s hope that the Balmainia is still strong enough to convince the fashionistas to pay so much for this DIY-look…

Stay tuned as I will go much more into detail during the next weeks about the trends and must-haves for S/S 2011.
If you are interested which collections were my Top 20 for F/W 2010, please click here.

To a very promising and cheerful looking summer!