26-year-old Alexander Wang has been conquering the high fashion world since his first eponymous collection in 2007. Born and raised in San Francisco, the wunderkind moved to New York City at the age of 18 to try his hand at designing clothes. He attended Parsons School of Design for two years and interned with Mark Jacobs. 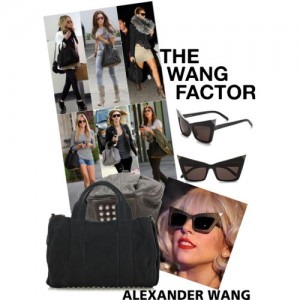 Wang has become well-known for his M.O.D., “model–off–duty–look“. He says: „Anyone can get all dressed up and glamourous, but it is how people dress in their off days, that is the most intriguing.“
With a growing fan crowd embracing his modern approach to dressing, he has taken the industry by storm.

The bag collection was launched in 2008, followed by the diffusion line T by Alexander Wang and shoes in 2009. Wang has created already many signature It-pieces like the cat’s eye sunglasses spotted first on Lady Gaga or the bottom-studded Rocco bag, Mary–Kate Olsen was frequently seen.

He is the recipient of the VOGUE/CFDA Fashion Fund in 2009 as the Swarovski Womenswear Designer of the Year, celebrated again in 2010 with another Swarovski Designer of the Year Award (this time in the Accessory category).
Last year he won the Swiss Textiles Award. As a culmination of this year’s gala, the king of sexed-up streetwear cool showed his surprising S/S 2011 collection, seen before on the New York runway.
The colour range went from all-white to ivory, mint, curry and terracotta. Deconstructed looks, coverall straps, stiff canvas covered with paint spots and industrial materials like Tyvek played an important role. Rose gold stripes reminding of duct tape and white paint in the models’ hair finally evoke the theme of carpenters.

I was very lucky to meet Alex in person and do an interview with him. Enjoy his answers and the photos of his S/S 2011 show in Zurich!
Photos: Image Gate © 2010 Getty Images 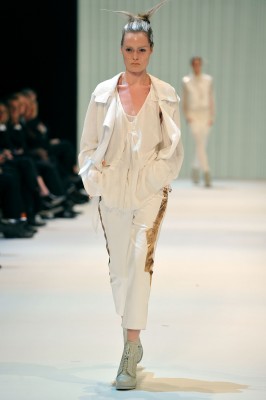 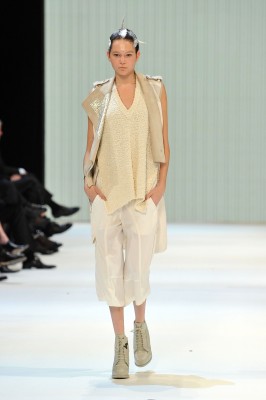 You are back in Switzerland again. How do you like it here?

Unfortunately, I haven’t been out that much. Hopefully I will see more. I was pretty busy. This time, I am enjoying it not to be under the pressure to compete.

You received a lot of top honours, among them last year’s Swiss Textiles Award. Those prizes are accompanied by a generous financial support. Did that help you building up your company and gaining even more popularity?

The monetary component is always an advantage but I wouldn’t say it is a priority. I think just the recognition of being in a different market than where we are based, having that awareness and exposure was definitely something that we experienced over the last year. Especially the opportunity and the ressources to work with the Swiss Textiles Foundation gave us the possibility of developing new fabrications for our S/S 2011 collection, that are much more special and expensive. That was definitely the part that I thought was the top advantage of winning the award. 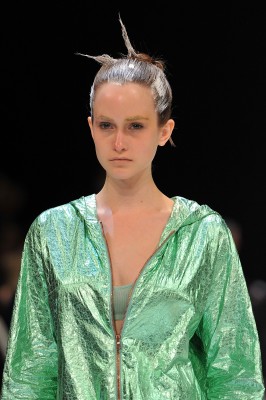 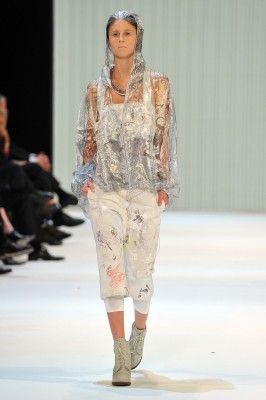 You launched the your first collection in 2007.  Despite the financial worldwide crisis, you were on the rise during those for many people very tough last two years.
After your Wall Street inspired Fall runway, you are trying something new again, something unexpected was seen on the summer catwalk. After the deconstructed bankers there are now deconstructed carpenters…. What is your message?

I want to show the world that they don’t have me all figured out yet. For me, the most important thing is having a very strong point of view that you can evolve.
Every designer has their own method of doing things. This is my way of communicating to my customer and to the industry of what I have to say.

Hopefully, there will be more to follow but nothing is planned so far. I really wanted to take the time and do something right that I feel very strong about. A lot of people rush into things very quickly. I can’t say that. We obviously had a lot of growth in the last couple of years but sometimes you really have to take a moment to think what you are doing, to consider the next steps and where you want to expand.
For us, the store has always been the best possibility to really showcase the full brand and its entirety, where you can really control the image. We are opening it in New York next year. It is an intense process and I want to make sure that each and every detail is done correctly to my standards of perfection. 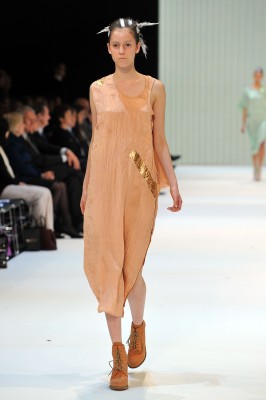 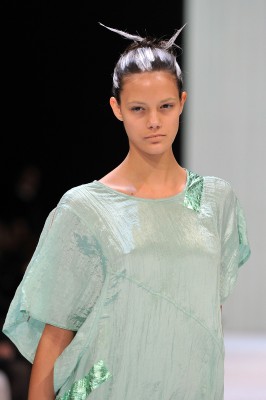 You already did a collaboration with Gap. Can you imagine to do something similiar with H&M, too?

Let’s take all that a little further. If another long-established fashion house asked you to become their new creative director and you could dream of one, which one would it be?

I don’t know if I could answer that question right now. The opportunity has definitely been there before but I feel that my focus should be on growing my own brand and company. Building something solid is my top priority at the moment.

Wangsters, Wang-ettes, fashion editors come up with all sorts of names for your fan crowd. How does it feel to be the leader of a cult?

I find it very flattering of course that people really dedicate themselves to what we are creating.

I do what I love and I am very thankful for having an audience that really appreciates my work. That is why I am a designer. I create clothes for people that want to wear, buy and live in them.
It is not for my own selfish indulgence, to do something just purely creative. It is about the combination of creativity and yet being commercially buyable, that goes to the stores and makes people desire it.

You are very good friends with Erin Wasson? Would you call her your muse? Who is inspiring you?

Erin is a friend of mine, for sure, but I rarely use the term of muse. I think it is outdated and old-fashioned.
I am inspired by people who work for me that are my family and friends, that I interact with, that I constantly have a communication with.

You went to Parsons for a four-year programme and dropped out after two years to focus on your first collection that was mainly about knitwear and sold to over 200 stores. That is absolutely amazing. Did you have any connections? How did you do that?

(Laughs) There has been the myths that my family owns production facilities. Probably because we are Chinese, people make that association. Other rumors said that we made a big investment. This is all not true.

The brand started off very small with only six styles. It was just that people really responded to the authenticity, to the genuine feeling. When you have someone who really believes in doing something and would do anything to make it happen. Luckily, I had a very big support in terms of a family and I don’t mean just financial.
The people around me encouraged me to keep going. My mum who let me leave school and friends who encouraged me to do what I believed in and not listening so much to what the stores were telling me to do, what the showroom wanted me to do. Saying so what, that is my customer, this is the one I want to design for, that is the one, I want to sell to and this how I want to approach it! And I just stuck with it.

Can describe the Wang factor, the Wang DNA in three words?

I wouldn’t limit it to three words. There is definitely a sense of ease. At the end of the day, it is fashion, it is fun. People need to enjoy it. At a certain point when it is so strict, so controlled, pretentious, I don’t fun with it anymore. And that is not what our brand is about it. It is about individuality, ease and a sense of humour. I always look at it light-heartedly.

I love dressing men and women of all different ages and sizes. I don’t want to dictate how to wear my clothes. I get motivated by how people bring their own approach to my designs.

What do you think of all those fashion blogs? Are they the future?

This is part of a generation discovering a new method of communicating. It is definitely about being more acknowlegdeable of what is around me, my surrounding and how to communicate. It changed the way that fashion functions. I feel very priviledged to be part of this advanced generation.

And I feel very priviledged to have met you. Thanks, Alex, for this lovely interview!

Alexander Wang with me

It was truly a pleasure to talk to Alexander Wang. He is a very charismatic, energetic person with a very strong vison and full of enthusiasm. On one hand, he seems like the young boy he still is, a little hyper and kind of innocent, on the other side, he is an already experienced business man who goes his own way. This is a very interesting combination and probably his key to success.