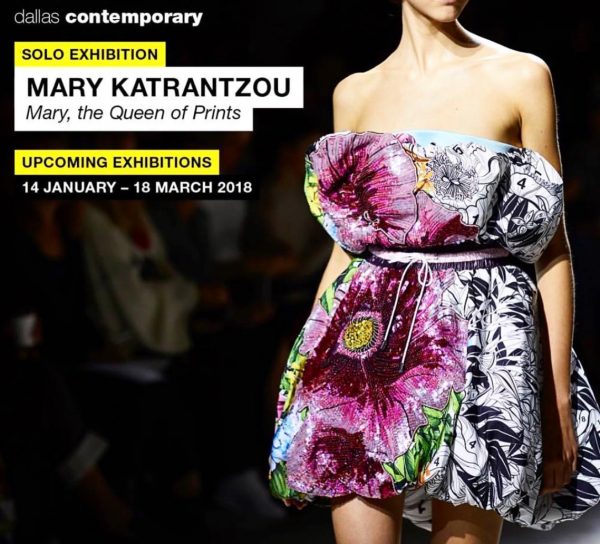 My avid readers know how much I love MARY KATRANTZOU. Since her first collection, I have been collecting her designs. So I was over the moon when she told me to be part of her first solo exhibition that opened its doors this weekend at Dallas Contemporary as part of its first season for the new year. «Mary, the Queen of Prints,» explores the innovative work and kaleidoscopic world of fashion designer Mary Katrantzou. In addition to the museum celebrating its 40th anniversary in 2018, the upcoming year also coincides with the 10th anniversary of Mary Katrantzou’s brand. 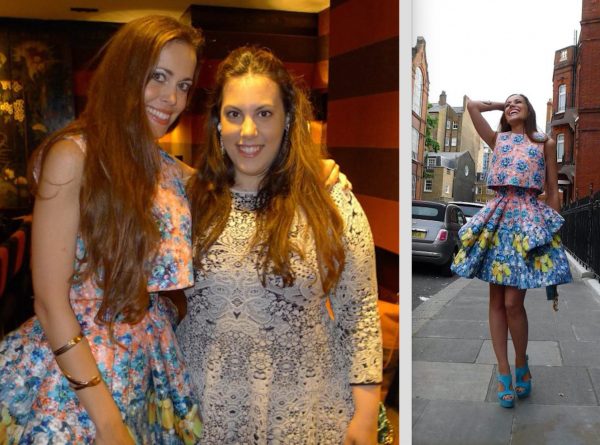 With Mary at the Net-à-Porter Dinner in London in a S/S 2014 printed top and skirt.

Mary Katrantzou has said: «Print can be as definitive as a cut or a drape and allows a woman to filter beauty found in design, in a subversive way. All my prints are constructed through digital technology. Digital print allows me to experiment with print in a way that fine art and other methods could not. It opens up a huge spectrum for possibility; I can create possibility out of impossibility, surrealism out of realism and both vice versa.»

Following previous collaborations with top cultural institutions such as the New York City Ballet and the Paris Opera, this exhibition will be the first time the entirety of the designer’s previous collections is represented under one roof.

A beautiful dress from the F/W 2011 collection photographed by Tim Walker for Vogue.
  
Curated by Museum Director Peter Doroshenko and Director of Exhibitions Justine Ludwig, the exhibition will consist of approximately 200 garments as well as accessories, sketches, and textiles by Katrantzou. The works reveal Katrantzou’s diverse inspirations ranging from the pages of Architectural Digest to Fantasia, and provide a closer look at her inventive tailoring and techniques. 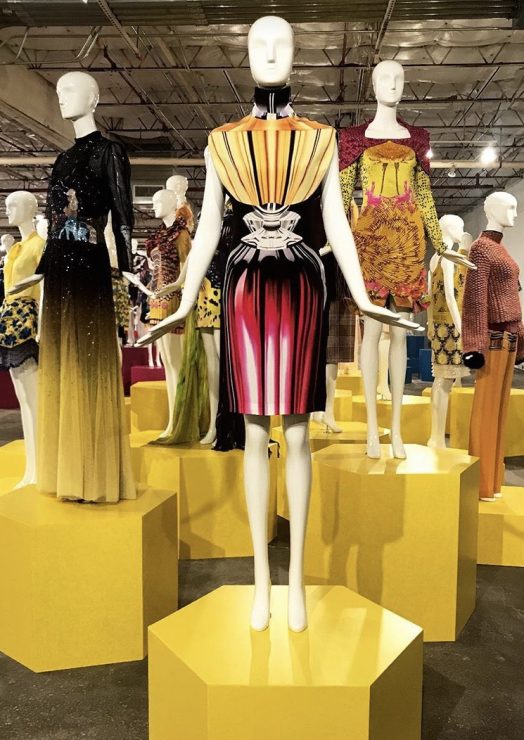 Presented in color groupings rather than chronologically (Katrantzou’s masterful use of color has been central to her aesthetic since the beginning of her brand), the garments create a prismatic field of color within Dallas Contemporary’s distinctive space and reflect the designer’s recognition in the industry as a creative mind and innovator. 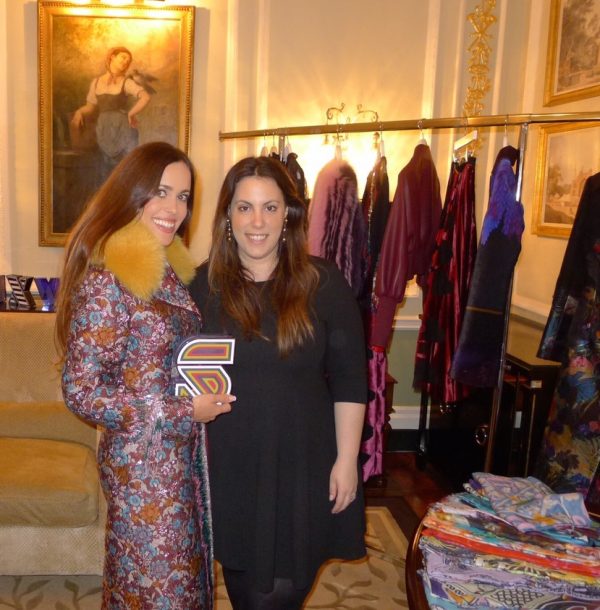 With Mary at the UBS Unique Event in London in 2017
 
ABOUT MARY KATRANTZOU
Born in Athens, Mary Katrantzou studied Architecture at Rhode Island School of Design and graduated with a BA in Textile design and an MA in Fashion from Central Saint Martins. Her graduation show in 2008, which featured trompe l’oeil prints of oversized jewelry on jersey-bonded dresses, took the industry by storm, immediately securing a number of prestigious stockists, notably Browns, Joyce, Colette. After her graduation show, Mary Katrantzou established her namesake brand. She now boasts over 100 high-end stockists ranging from Selfridges to Joyce, Matchesfashion.com, Harrods and Saks. 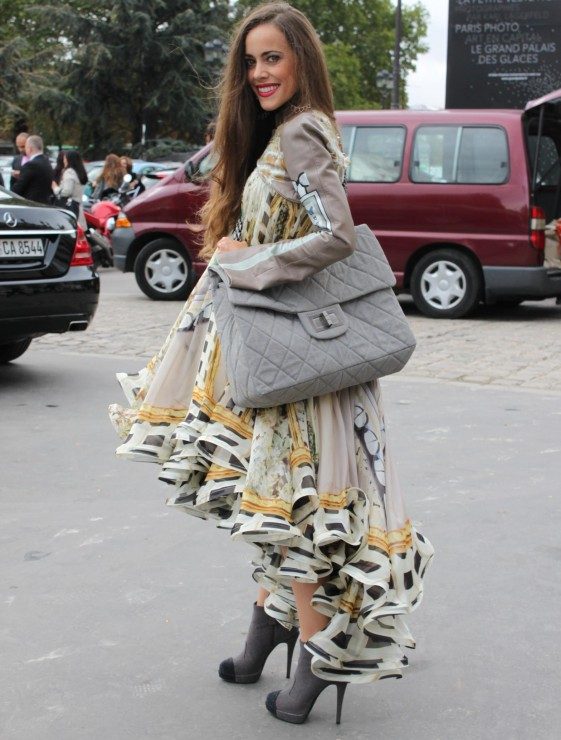 Wearing the Ivory Dress from the F/W 2012 collection.

Mary Katrantzou was dubbed “The Queen of Print” by press, a moniker that recognized the enormous influence of her work in the medium. Katrantzou plays with clashing aesthetics, mixes technology and craftsmanship and explores opulent innovative embellishments in a world that is feminine, innovative, fresh and elegant. 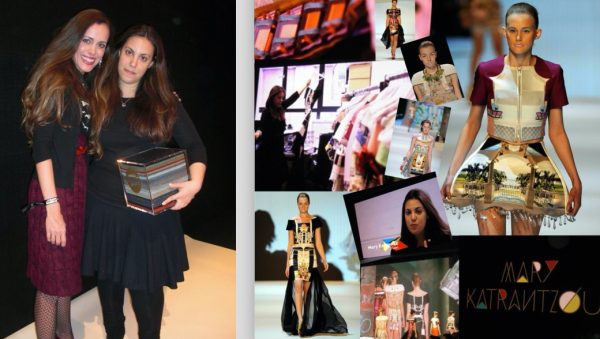 Winning the Swiss Textiles Award in 2010 in Zurich

In 2010 Katrantzou was awarded the Swiss Textiles Award in recognition of her pioneering textile treatments; in November 2011, she received the British Fashion Award for Emerging Talent, in February 2012 was awarded Young Designer of the Year at the Elle Style Awards. In 2015, Katrantzou received the Vogue Designer Fashion Fund, was awarded Glamour designer of the year, Harper’s Bazaar Breakthrough Designer as well as the British Fashion Award for New Establishment Designer. 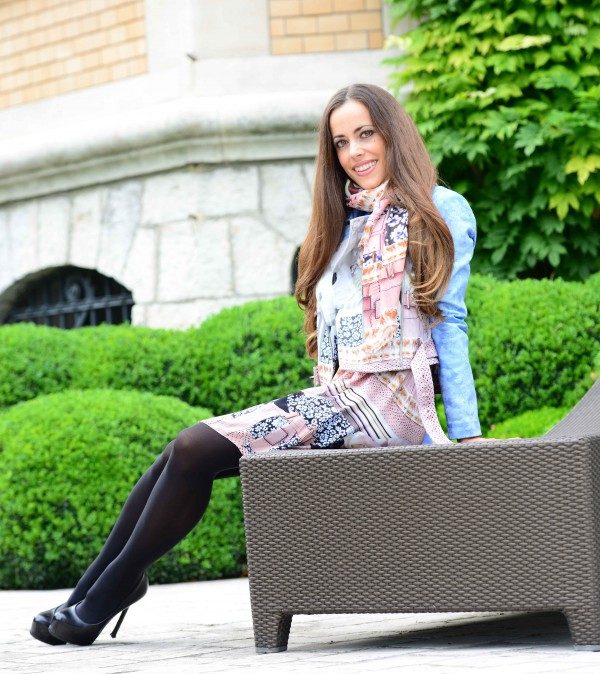 In Mary’s Powdy Print from the F/W 2012 collection.

Prestigious collaborations have included capsule ranges with Swarovski, Longchamp, Moncler, Topshop, Cowshed and Adidas Originals. Mary has also collaborated with artist Pablo Bronstein at the ICA, designed costumes for the NYC Ballet and the Paris Opera and her work has been exhibited at the New York Metropolitan Museum of Art and at Lord Rothschild’s «Creatures and Creations» exhibition at Waddesdon Manor in the UK. 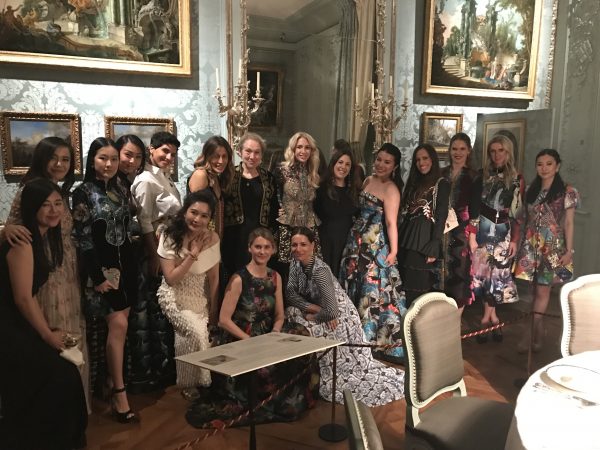 Mary’s Girls: from Mira Mikati to Nicky Hilton, from Sabine Getty to Wendy Wu – we all celebrated with opening of «Creatures and Creations» in May 2017. 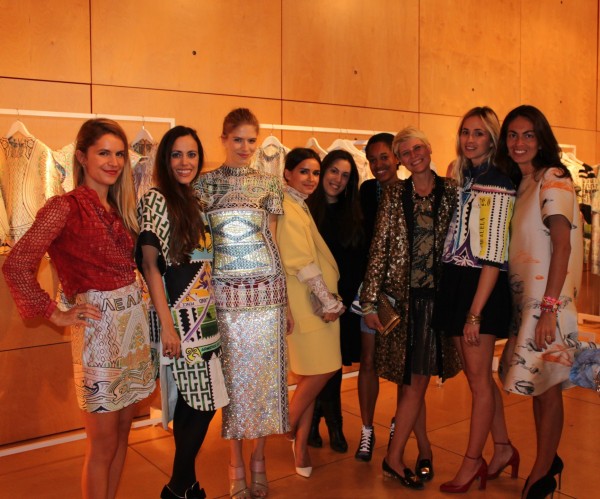 Below you see how many pieces of the exhibition are from my closet. So proud of my personal collection and the fact that I have been part of the Katrantzou family from day one. 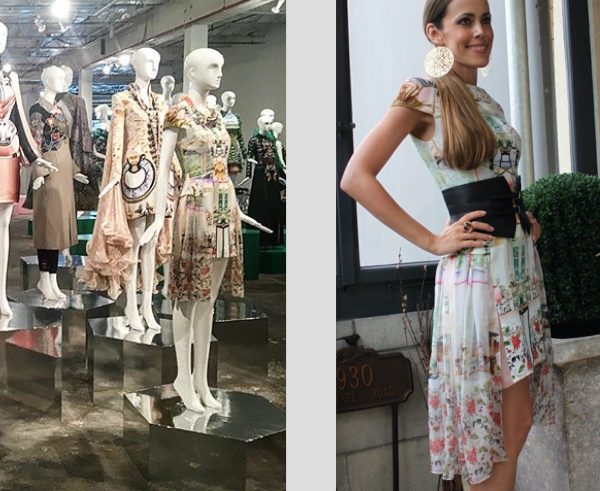 Serendipity Dress from the S/S 2011 collection Caramolengo Dress from the F/W 2011 collection 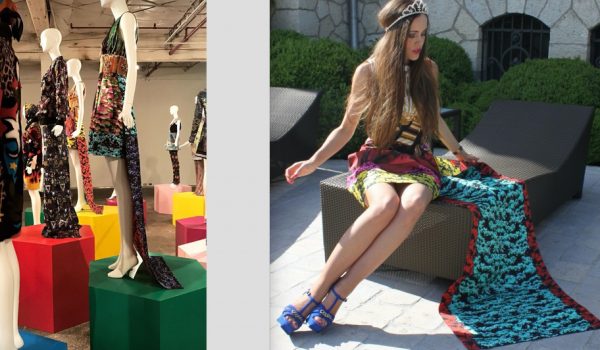 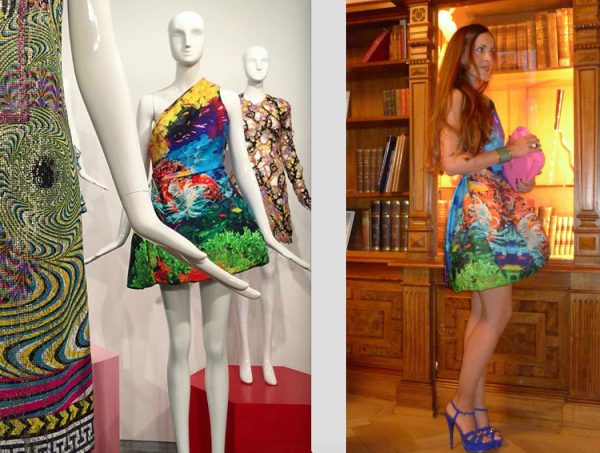 Fishtank Dress from the S/S 2012 collection Expandit Dress from the F/W 2012 collection 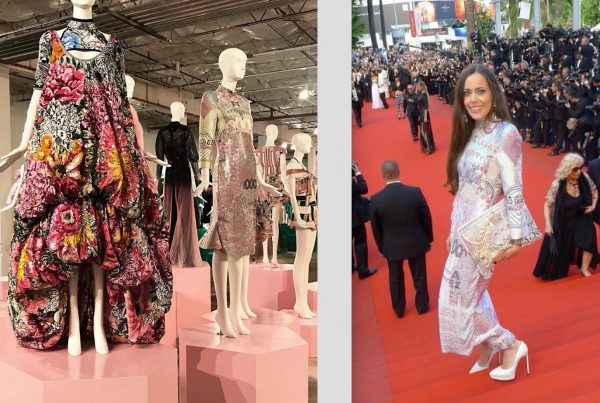 Alias Dress from the S/S 2013 collection 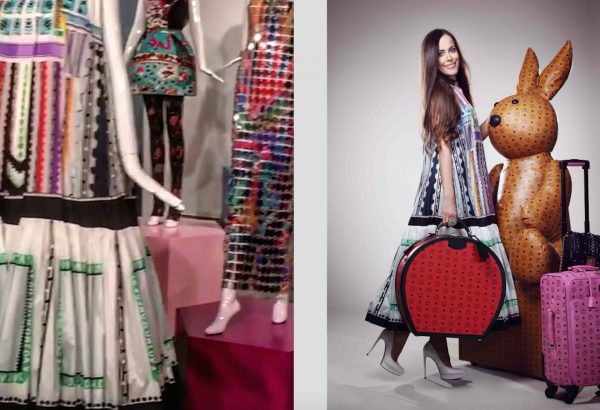 Ziggy Dress from the S/S 2013 collection 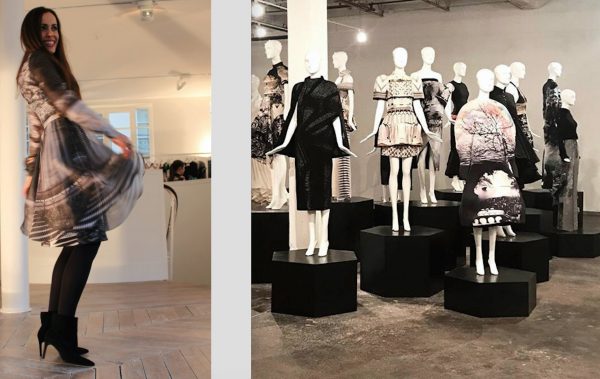 Orlyon Dress from the F/W 2013 collection

Godiva Jacket and Godiva Skirt from the S/S 2014 collection Hemera Dress from the S/S 2017 collection 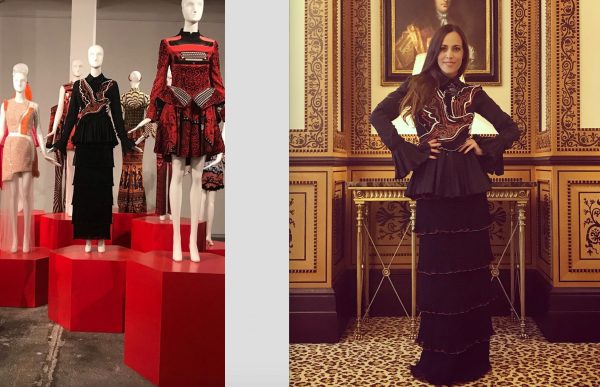 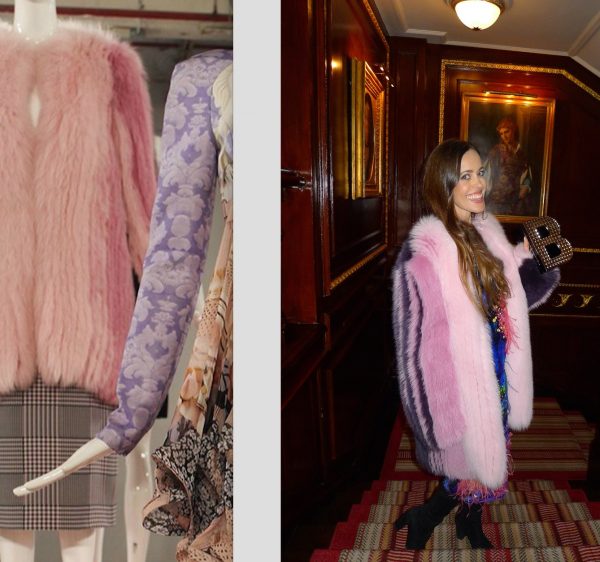 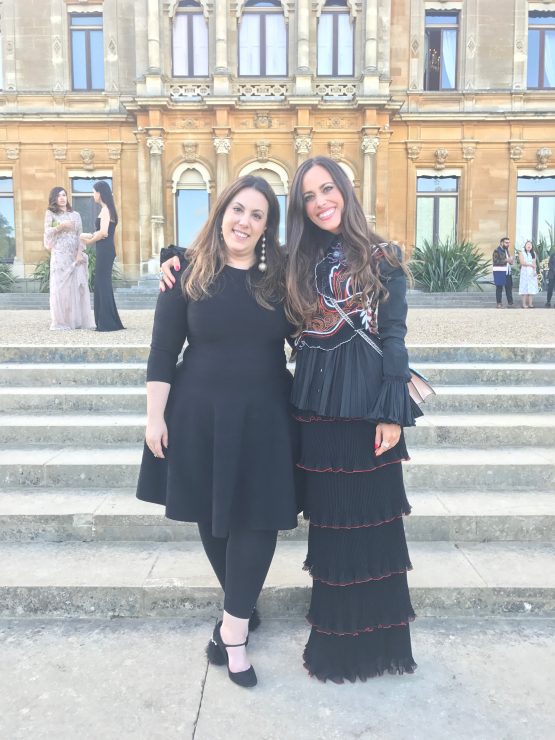 To many more year to come! Congrats, Mary, I love you!