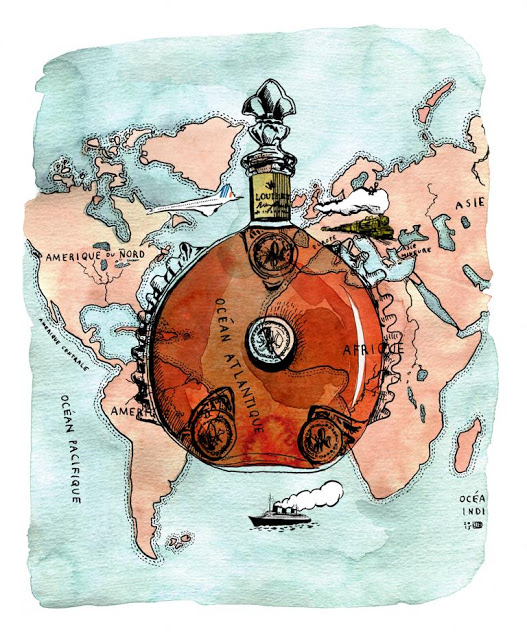 What happens if four French luxury houses join forces? They surely design something very special that exudes rare craftsmanship and unbroken tradition. Offering a bespoke tribute to one of the world’s most storied Grande Champagne cognac’s mythical journeys through the ages, LOUIS XIII has collaborated with HERMÈS, SAINT-LOUIS, and PUIFORCAT. 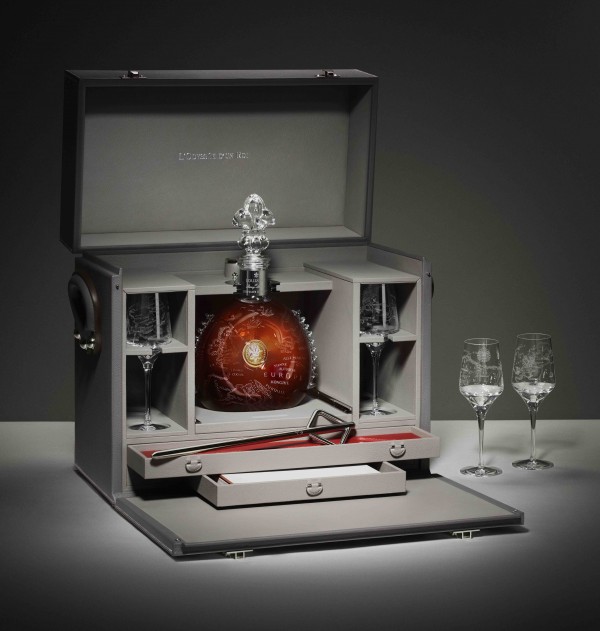 Each of them contributing their own expertise and centuries-old savoir-faire, they have created together a series of three one-of-a-kind masterpieces, L’ODYSSÉE D’UN ROI (JOURNEY OF A KING), that is paying ode to the travel heritage of the famous cognac house.

THE ULTIMATE JOURNEY
LOUIS XIII has been present at every milestone in the history of luxury travel — from the legendary bar-car of the Orient-Express to the first-class lounge of the S.S. Normandie ocean liner to the sleek cabin of the supersonic Concorde jet. To pay tribute to this heritage of adventure and discovery, L’ODYSSÉE D’UN ROI is inspired by the first shipments of LOUIS XIII in the late 1870s and the iconic journeys that followed to the farthest corners of the globe.

THE AUCTION
The three trunks will be offered in a special 1-lot sale in different auctions at Sotheby’s, one in NYC on September 10, 2016, one in Hong Kong on October 1, 2016 and one in London on November 16, 2016. Each masterpiece is unique, its design and contents are inspired by the continent for which it is destined.

All proceeds will be benefiting «The Film Foundation», a non-profit organization founded by Martin Scorsese and other leading filmmakers in 1990 to preserve and restore classic films, ensuring their survival for future generations. In this same spirit of preservation, the house has pledged to replant 115,000 oak trees in France in partnership with ONF (French National Forest Office). 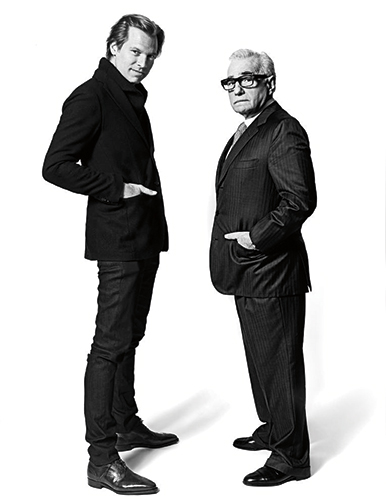 “LOUIS XIII – L’ODYSSÉE D’UN ROI is truly the result of a work of art and genius, a veritable tribute to craftsmanship and time. Much like the time, finesse and care it takes to create LOUIS XIII, so it is with the process of preserving classic cinema. We therefore decided that the proceeds of LOUIS XIII – L’ODYSSÉE D’UN ROI will be donated to THE FILM FOUNDATION, a group dedicated to film preservation and the exhibition of restored and classic cinema, a cultural legacy that one generation leaves to another.”
Ludovic du Plessis, LOUIS XIII Global Executive Director 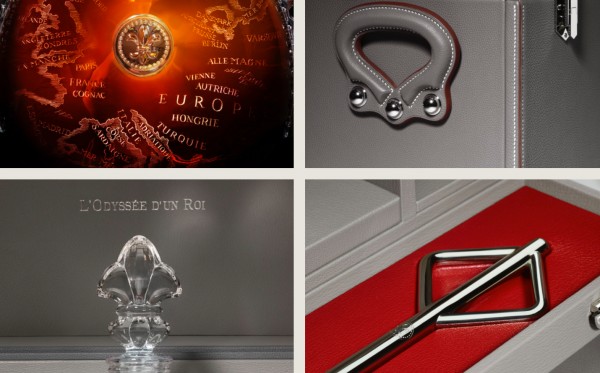 Let’s have a closer look at those masterpieces that were created by more than 5o individual artisans that devoted over 1000 hours per piece to produce the three bespoke creations.

• A beautiful book that chronicles LOUIS XIII’s mythical journeys that begin on a 16th-century battlefield in rural France but will touch every corner of the globe.

• A bespoke trunk hand-stitched by HERMÈS using the finest leathers and evoking a bygone era of luxury travel.

This bespoke trunk was hand-stitched by HERMÈS using the finest leathers. Modelled on a classic steamer trunk — the kind that would have been taken on an ocean liner or a long journey by train — it evokes a bygone era of luxury travel. In fact, the handles are exact replicas of those used for HERMÈS from the 1920s and30s. Of course the design of the interior was created for a very precise function, which is to luxuriously house a unique magnum decanter of LOUIS XIII. This unique object is a suitably grand conveyance for this unforgettable journey across space and time. 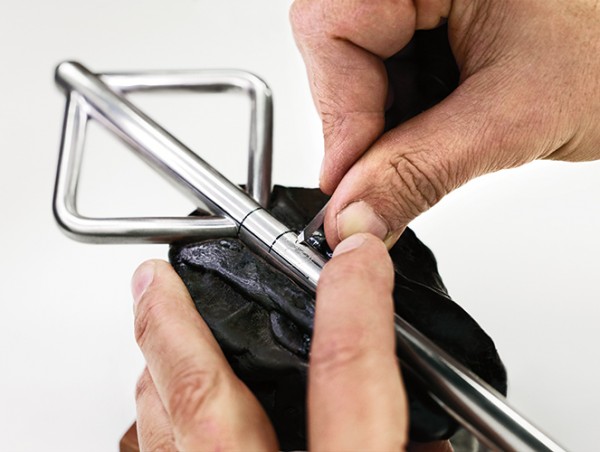 • A white gold pipette forged by the Art Deco silversmith PUIFORCAT for the ritual of service. 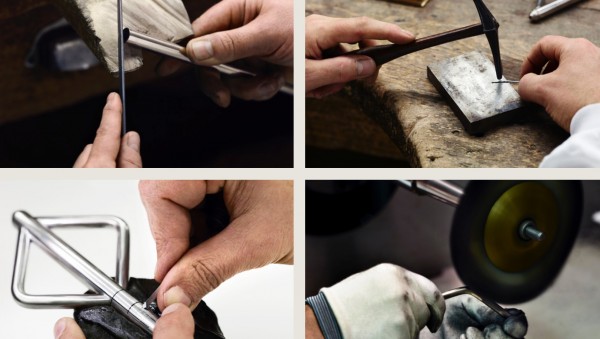 This white gold pipette was forged by hand by the Art Deco silversmith PUIFORCAT for the ritual of service. The method is centuries-old: the craftsman spins a plate of silver on a mandril, which is a tapered piece of wood that turns horizontally. He uses a simple tool called a “spoon” to give shape to the object. Several passes are often needed for a piece to take on the desired contours. These steps are punctuated by “annealing,” a controlled heating process used to soften the metal. Etching is another whole step: the piece is wedged on a leather pillow full of sand. With thin notches made on the surface of the metal, the craftsman can draw a coat of arms or some other decorative pattern with exquisite precision, honed through decades of practice. 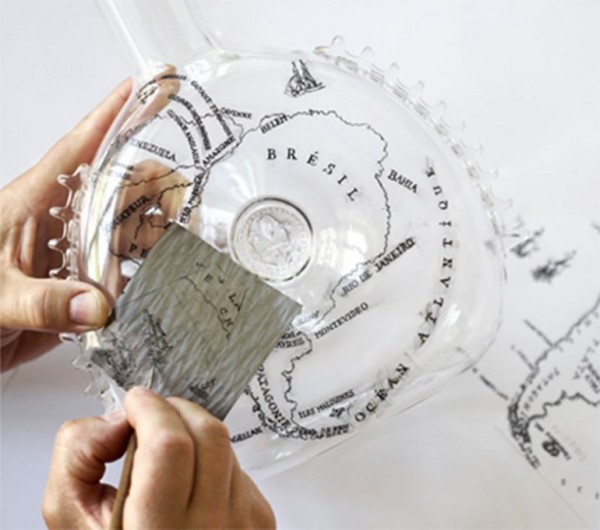 • A sublime crystal decanter and four elegant serving glasses — mouth-blown, cut and wheel- engraved by hand at the royal cristallerie SAINT-LOUIS. Each decanter is etched with a 19th-century map of the continent where it is bound. 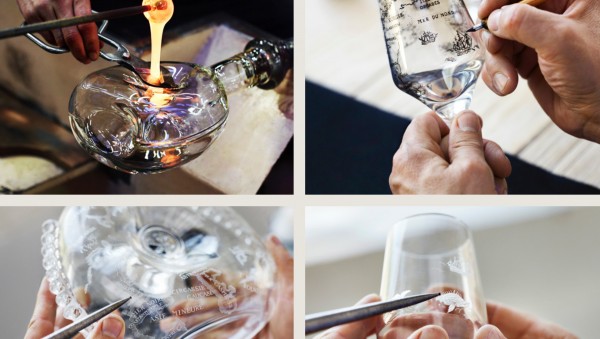 Three sublime crystal decanters and 12 elegant matching serving glasses were blown, cut and engraved entirely by hand at the royal cristallerie SAINT-LOUIS. The ancient, painstaking technique of copper-wheel engraving has given these crystal works their regal profile. Each magnum-size decanter was additionally etched with a 19th-century map of the continent where it is bound. For this project, SAINT-LOUIS capitalized on the savoir-faire of more than 10 craftsmen — including four glassblowers, one engraver, and a specially trained artisan to apply the palladium trim to each crystal object. The crystal was heated to over 1,400°c degrees and then mouth-blown at around 1,200 °c. Each glass required 110 man-hours of work while the magnificent decanter itself took no less than 270 hours to accomplish. 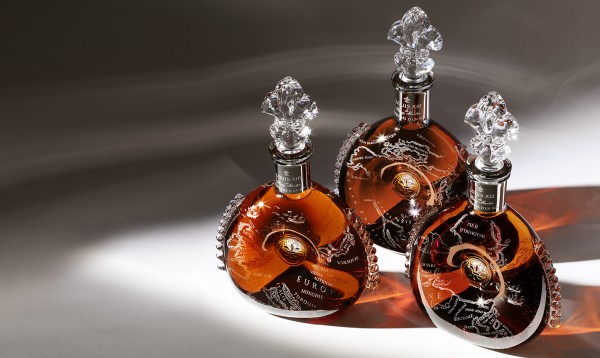 • A blend of LOUIS XIII Cognac enriched with a selection of the house’s oldest treasures from Grande Champagne, that each cellar master pass on to each other, from generation to generation. A very special spirit revealing flavours that are at once singular and complementary. A cognac to savour and admire. 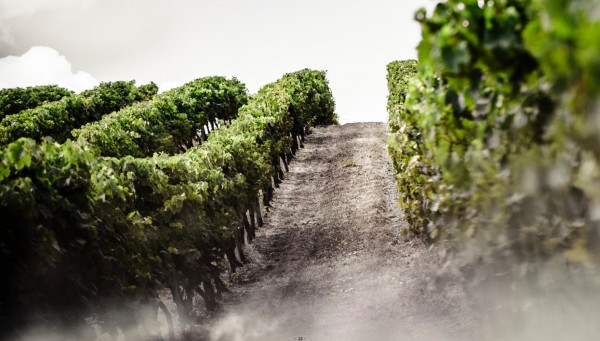 Of all of the legendary travels of Louis XIII, its most important journey is the one taken through time. That voyage begins in the rolling hills and chalky soil of Grande Champagne, the strictly demarcated and most prestigious cru of Cognac. Here the region’s delicate grapes — predominantly the Ugni Blanc variety — are harvested and turned into a low alcohol wine, which is then twice distilled in an onion-domed copper pot still, yielding an eau-de-vie of uncommon freshness and power. Only the tiniest sliver of this base spirit will be set aside to become, four generations later, a part of LOUIS XIII. 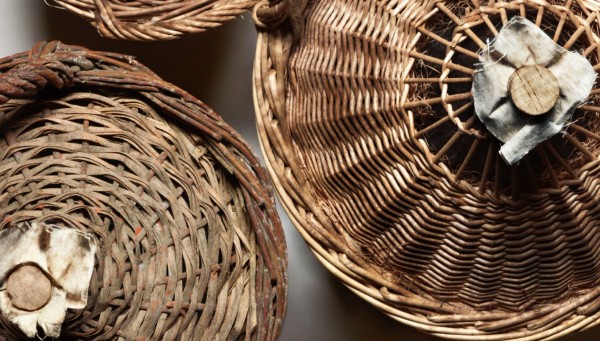 That ageing process takes time, but also a tremendous amount of savoir-faire, an almost mimetic genius possessed by each generation of LOUIS XIII’s cellar masters. The chais, or cellars, in which they work are dark, incredibly quiet places, the barrels in which the cognac rests covered in thick blankets of spider webs. As the alcohol evaporates over time, the spirit deepens and darkens, releasing a sweet and rich smell that fills the moist air. 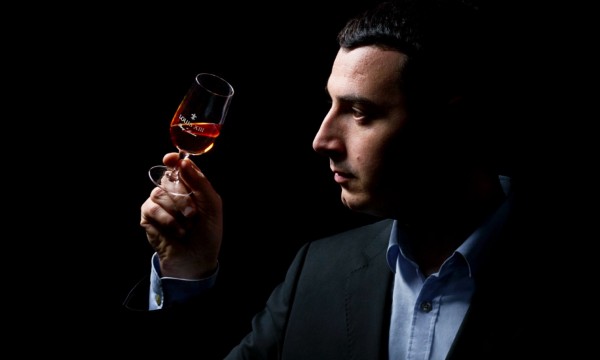 The keeper of the legend, Baptiste Loiseau, the current cellar master, joined the house in 2007.

“In one century I won’t be here, so I have to be sure, deep inside, that what I select really corresponds to the universe of LOUIS XIII. It’s a big responsibility, if in tasting this blend, I don’t have the sensation or emotion given by the previous cellar master, then something is missing.”
Baptiste Loiseau

With each passing year, the cellar master dips a pipette into the barrel and tastes something different. At 20 years, there is almonds, figs and fresh-baked brioche. At 40, candied plums. At 70, honeysuckle and saffron. All the while, he is blending different eaux-de-vie, searching for perfection through a process called marriage.
By 100 years, hundreds of eaux-de-vie have been married together, resulting in a complex, ineffable flavour. On the nose, it is elegant and floral: dried rose and jasmine — the fragrances of Grande Champagne. These are followed by denser notes like dates, dried fig and walnut. On the palate, the first drop of LOUIS XIII unleashes a ballet of flavours; the walnut and fig aromas soften with those of honey as headier notes — of wax, tobacco and undergrowth — roll in like a wave. The tasting is distinguished by a haunting, lasting finish. The century-long journey of LOUIS XIII has come to its triumphant end.

  L’ODYSSÉE D’UN ROI is a shining testament both to the heritage that created LOUIS XIII and the nature that continues to inspire it. The protection of cultural treasures — whether the art of filmmaking or the art of cognac — requires time, finesse and care. It is a beautiful project, bravo LOUIS XIII!

And if you interested, check LOUIS XIII’s other recent project in collaboration with John Malkovich: «100 Years: The Movie You will Never See» by clicking here.