“For our Fall/Winter 2012-2013 campaign, we wanted to continue the journey we started with the fashion show,” says Louis Vuitton Artistic Director Marc Jacobs. “Our aim was to recreate, in a cinematic manner, the glamour of travel and the romance of going somewhere, of meeting someone, of looking out a window…”

To this end, the interior of the Louis Vuitton Express, which brought Paris Fashion Week to such a memorable conclusion, was reconstructed, in all its exquisite and extravagant detail, in a New York studio – the locomotive itself having already set off on a new adventure. Winding its way East across two continents, the Louis Vuitton Express is scheduled to pull in on Shanghai’s famous Bund on July 19th.

Shot by Steven Meisel, this is the first Louis Vuitton campaign ever to evoke so exactly the ambiance of the fashion show. Unprecedented levels of know-how and attention to detail were deployed to create a compelling restatement of the romance of travel, true to the heritage of Louis Vuitton. In the role of the travelers, ten young models – accompanied by four porters – showcase the collection’s gracefully elongated A-line silhouette, embellished with jewel buttons and opulent brocades.

In keeping with the theme of travel, Louis Vuitton’s iconic Monogram canvas luggage, stored in an overhead rack or carried by a porter, shares the spotlight with the season’s standout bags, including the Monogram-sequined Sunshine Express, the black and white Leopard, and the spectacular Transsibérien, with its jewel buckle and dip-dyed goat hair.

“All of these glamorous travelers have an imaginary voyage in their head, which is wonderfully captured by Steven Meisel,” continues Marc Jacobs. “I cannot think of anyone who could pack a train with so many beautiful young women and their porters, and still make the ambiance feel light and romantic. As opulently dressed as the girls are, there is a lightness and a magic to everything this season – and that is reflected perfectly in these images.”

The Louis Vuitton F/W 2012 advertising campaign, comprising a total of 10 single and double-page visuals, will break in the August 2012 issues of magazines worldwide.

I am so in love with this collection… so amazing! Below you can also enjoy some behind the scenes shots. 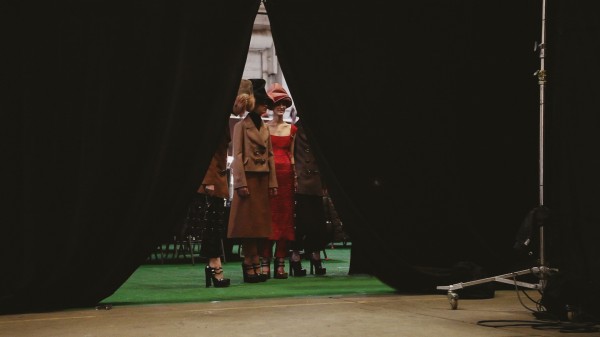