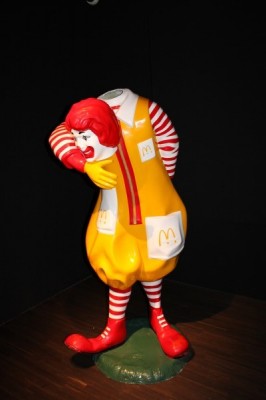 This weekend, I went to see the exhibition of Jani Leinonen, one of my favourite artists, at Galerie Gmurzynska. The Finnish 33 year-old rising star presented nothing less than the kidnapping and execution of Ronald McDonald at Paradeplatz in Zurich.
„The Hamburger company’s advertising figure is a symbol of capitalism and also a clown. That’s what makes it interesting to me as an artist“, says Leinonen.

Jani was good for groundbreaking headlines in the beginning of this year when he and his friends calling themselves the „Food Liberation Army – FLA“ stole a Ronald McDonald statue from a McDonald’s restaurant in Helsinki.

In an Al Quaeda-style video, they staged the beheading of the famous symbol and tried to force the American chain to answer some questions about how it produces its products.  The fast food company refused any dialogue. The videos of the kidnapping were viewed more than 700,000 times on You Tube.

Leinonen, who definitely knows how to play the game, is nevertheless a true professional when it comes to markting himself. He even has bigger plans to set up a park full of Ronalds but McDonald’s refused to sell him the statues.

The charming guy from Helsinki took the idea of a funeral even further. Tombstones with iconic Louis Vuitton logo prints or the packaging of YSL Paris were placed in the beginning of the exhibition. I have to admit that I had never thought about how my tombstone should look like, assuming it will hopefully take a long time until it is needed, but I am absolutely tempted to have some logo print going on there.

Jani Leinonen with hotelier Andrea Kracht and his wife Gigi, who exhibited his enormous cereal box installations last year at her famous Art in the Park event in the beautiful garden of the Baur au Lac.

Jani Leinonen with me

Leinonen has three main objectives for his future: First, he wants to create a piece of art that will be stolen one day from a museum. Second, an artwork of his should be so good that it will get copied in Shanghai. And last but not least, he wants to become so famous that Damien Hirst’s mother knows him.

Pretty cool! And probably not so unlikely… I am better keeping the inscription he wrote for me. It might be worth a fortune one day.