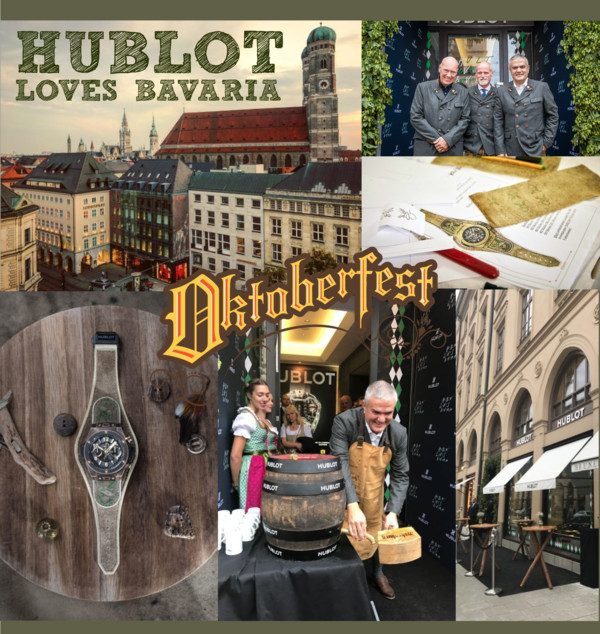 My avid readers know how much I love Munich, the city I lived in for eight years and the place where many important events in my life took place. Every little corner holds a memory. Therefore I was over the moon when HUBLOT invited me to join them for a «Wiesn Gaudi» to celebrate the launch of the amazing BIG BANG BAVARIA in bronze. Two renowned houses, HUBLOT & MEINDL, have joined forces to fuse innovation and tradition to celebrate Bavarian craftmanship and what could be more appropriate to present this «Art of Fushion» during the world’s most renowned festival—Oktoberfest?! 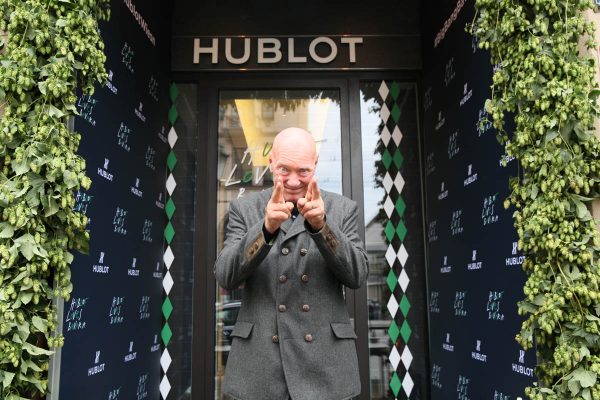 Traditions provide new generations with a unique way of reconnecting with their identity, it is why they last. Braudel said that in order to hope, in order to move forward, we also need to know where we come from.The Big Bang Bavaria is a concentration of history and traditions. 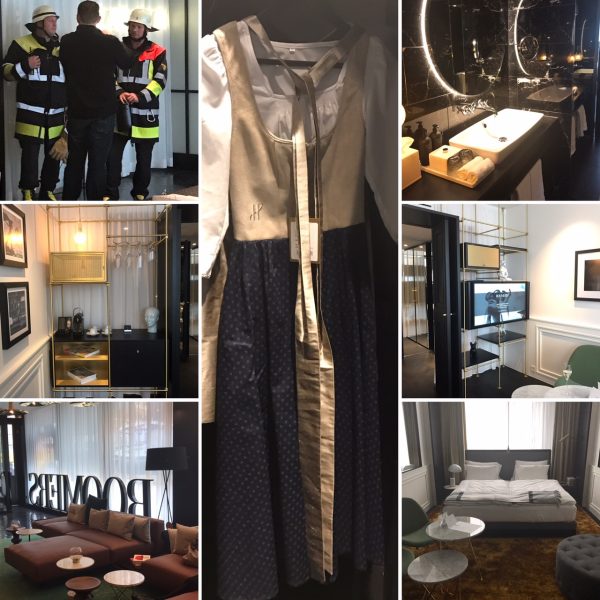 When I arrived, I was brought directly to my hotel, Roomers Munich, which celebrated its soft opening during those days. Unfortunately, there was no time for me to change as the minute I entered the lobby, I had to leave immediately due to a fire alarm. What a pity!

In my beautiful room waited a surprise for me: a MEINDL dirndl that features ultra soft buckskin, the iconic material MEINDL has been relentlessly working with for many decades on its traditional production. 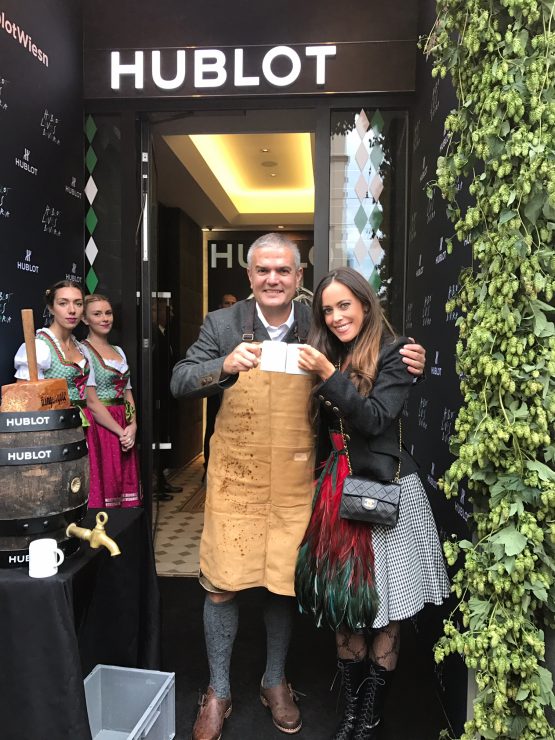 With Ricardo Guadalupe enjoying the first beer after the unveiling of the Big Bang Bavaria.

As if I had a premonition of what was to come, I was dressed already in Bavarian style and ready to go to the HUBLOT Boutique on Munich’s prestigious Maximilianstrasse where the BIG BANG BAVARIA was unveiled at 4pm on the dot in true «Wiesn» spirit with Markus Meindl, CEO of Meindl, present uttering the cry «O’zapft is», Ricardo Guadalupe, CEO of Hublot, opened the first barrel of the event just like at the Oktoberfest. It took three taps of the mallet to get the beer flowing. 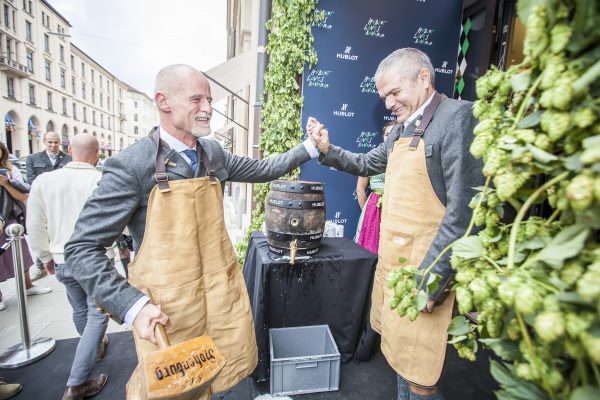 But how does the new watch look like? Cut from bronze, a material created in 3000 BC that has the advantages of non-magnetism, resistance to corrosion and a unique appearance, it is strapped onto two robust, hand-embroidered bracelets in deer leather. 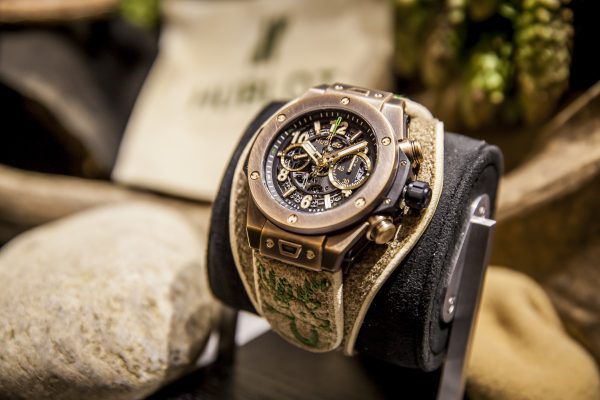 Centuries of expertise and tradition lie behind the BIG BANG BAVARIA strap. Firstly, the craftsmanship of a family that has been passing down its passion for leather from father to son since 1683. The BIG BANG BAVARIA strap is reminiscent of the «Lederhosen», the short leather breeches that originated in Bavaria and have been the traditional clothing of the mountain people since the 18th century. 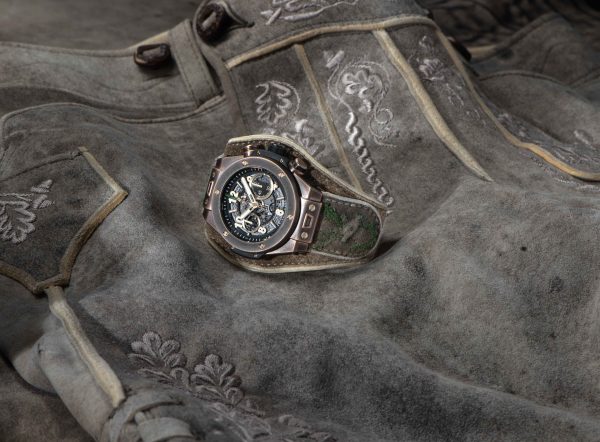 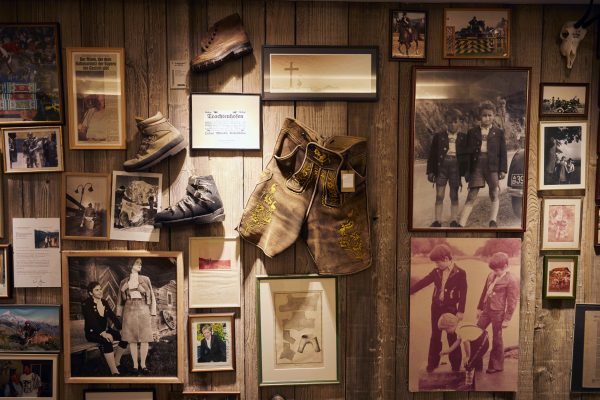 Just like the garment from which the strap draws inspiration, it is cut in deer leather and hand-embroidered with a pattern only possible to create on deer leather. Traditional sewing gives a 3D effect to the leather tanned using the MEINDL tradition. 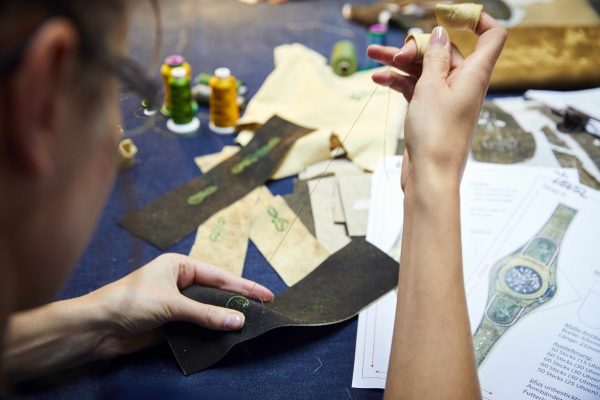 It takes 3 to 4 months to tan the hide using an age-old technique. The hides are salted then plunged into a limestone-based liquid before being washed, then treated by hand with cod-liver oil and dried. The last two steps are repeated several times until the leather is entirely soaked with the oil. The hide is left to dry in the sun to develop a light brown colour. To bring out the velvet character of the leather is then rubber with sandpaper. MEINDL then applies and brushes the leather with several tropical wood bark colorants, a procedure repeated up to 5 times. The products used are all without preservatives or chemicals to respect nature. 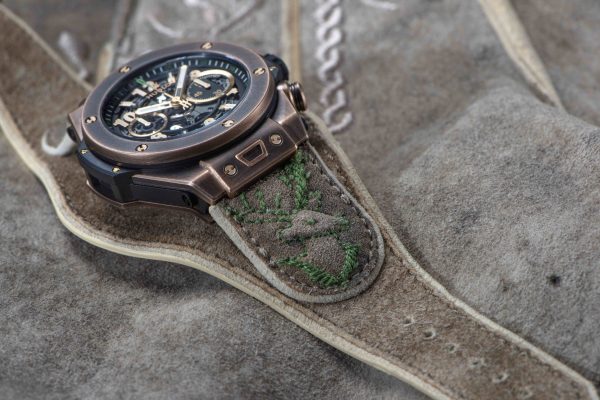 Delivered with two «One Click» straps, the BIG BANG BAVARIA easily changes its look thanks to its patented attachment system. There’s a version with a cuff in natural light brown deer leather, enhanced by two leather tabs embroidered with a deer head. The second version comes in «altsalzburg» (black-brown)-coloured deer leather, embroidered with oak leaves. 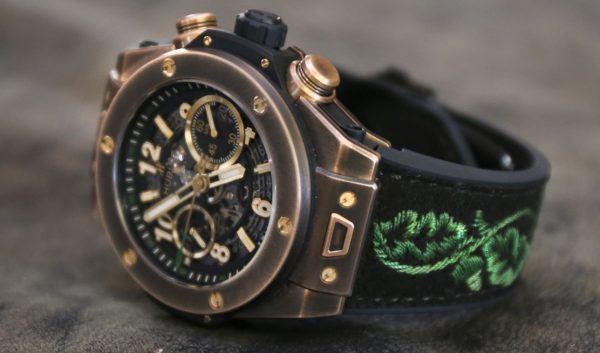 The BIG BANG BAVARIA beats to the rhythm of Unico, the Hublot manufacture movement, with 330 components for a 72-hour power reserve—a self-winding bidirectional movement with a flyback chronograph and a column wheel on the side of the dial. 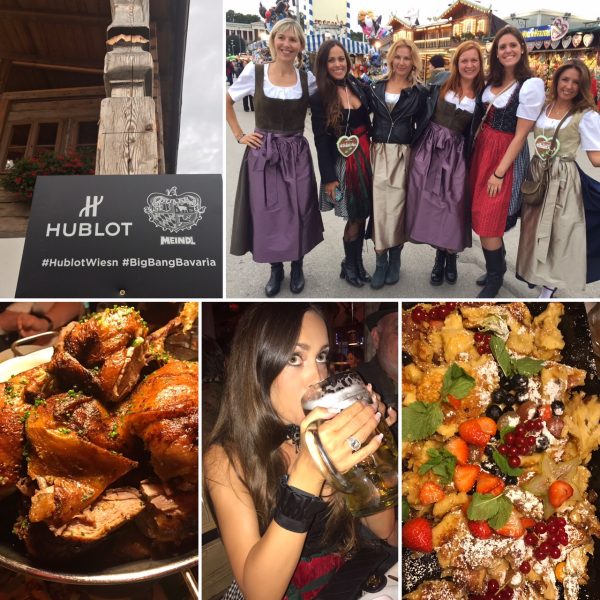 After our first beer in the boutique, we went to the one & only Käfer’s-Wiesn-Schänke – a must at the Oktoberfest – also for HUBLOT! While enjoying the iconic Bavarian «Schmankerl», the crispy duck and knödel (dumplings), I was singing to the amusement of my table-mates (all from the countries) to all the German songs played by the live band. But no worries, I can be pretty contagious and finally we were all  standing on the seats, dancing the night away. 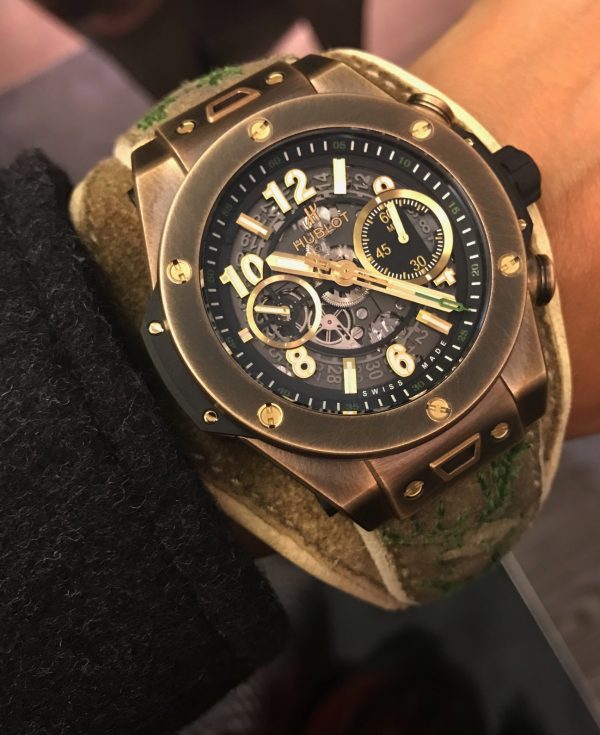 One of those trips I will always remember and a new memory added to one of my favorite cities. Thank you Hublot! Please create a BIG BANG BAVARIA in dirndl-style. I am convinced I would not be the only one loving it! 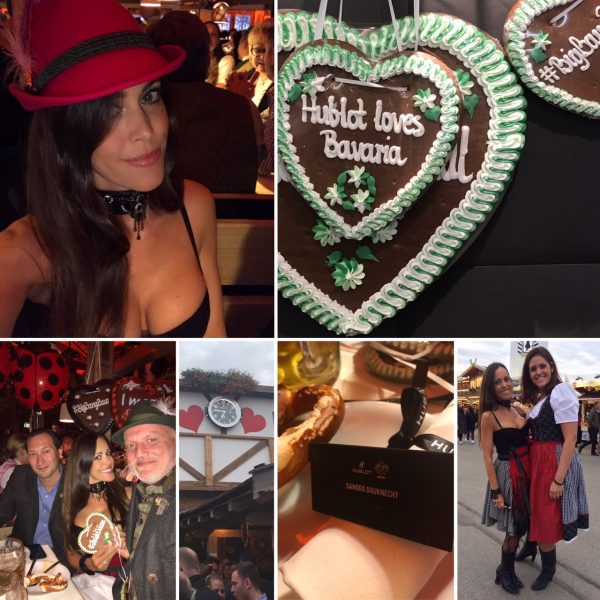