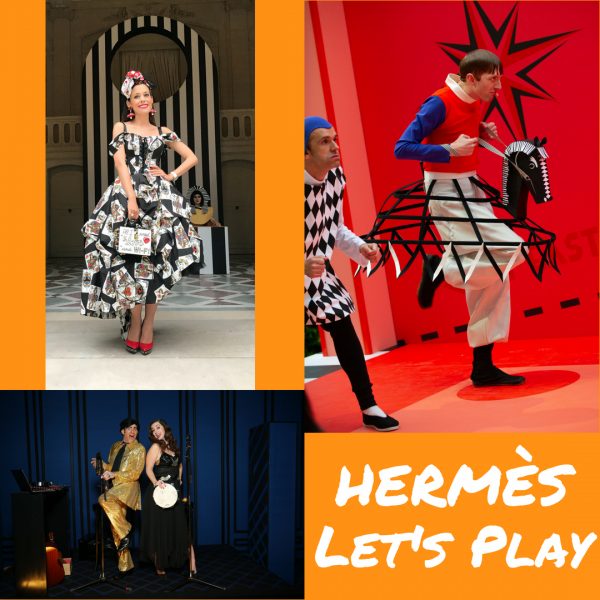 Yes, play! Because playing means being together, because it’s a way of learning about ourselves and others, a way of letting chance have its say, of both controlling and letting go. Because it is joyous, jubilant even. Because play reshuffles the pack. Because play is movement, freedom, imagination, fantasy, seduction, lightness. Where there’s play, there’s hope! But yes! After all, don’t players form a kind of alternative society? Doesn’t play itself form the outline of an utopia? Could we create, could we invent, could we even just imagine if we didn’t play? Certainly not at Hermès in any case, where our first comrade in play was the horse. Who knows, maybe that is the secret of our longevity. For a hundred and eighty years, this house has never stopped playing. 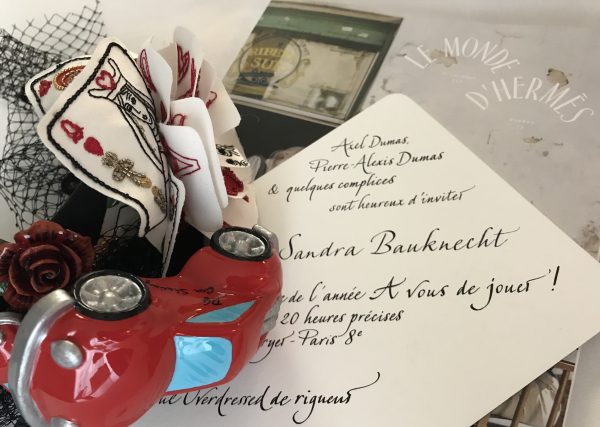 Mid June, I flew to Paris as guest of HERMÈS (those who have been following me on Instagram have already seen many photos and impressions), to celebrate the Maison’s theme for 2018 which is «Let’s Play», evoking emotions of whimsicality and playfulness. Each year has a theme that celebrates the French iconic brand’s vision and creative direction. As Pierre-Alexis Dumas said: «This year, Hermès is inviting you to play. It is meant to encourage people to break down barriers, let loose and have fun.» 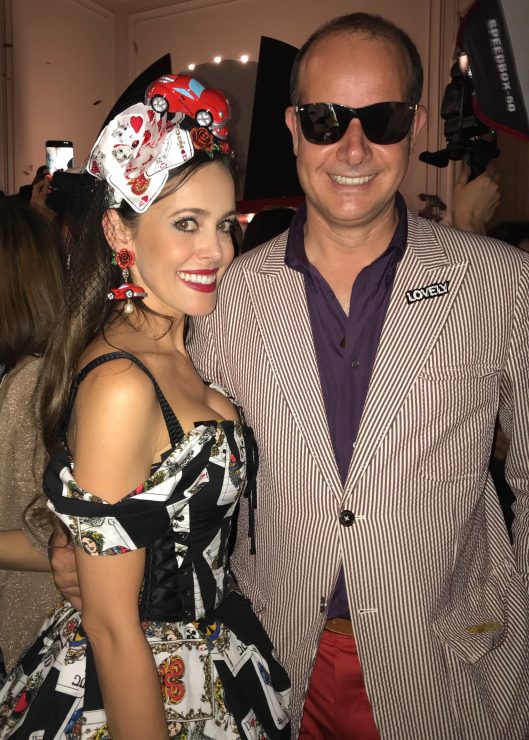 With Pierre-Alexis Dumas, artistic director of Hermès. Under his direction, the firm has seen its biggest growth in decades, with sales of 4 billion euros in 2014.

The story of HERMÈS’ year themes started in 1987 with the «Year of the Fireworks» to celebrate the brand’s 150th anniversary and was conceived by the late chairman and chief executive Jean-Louis Dumas. Since then, it has been a consistent feature of the brand and each year, new amazing themes take place. 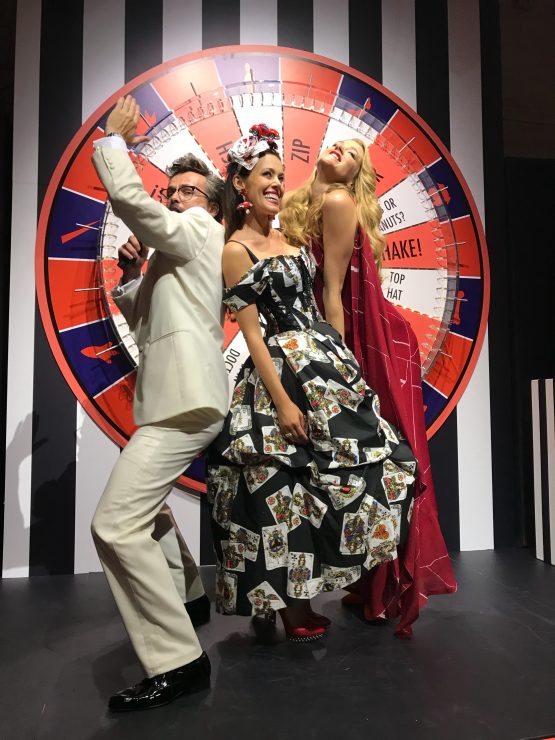 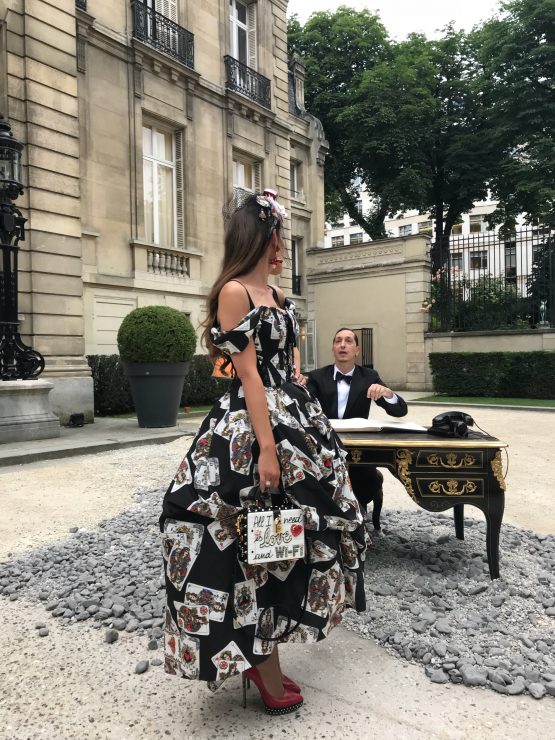 The concierge was announcing my arrival at the festivities.

When I was in Paris, HERMÈS turned the Hôtel Salomon de Rothschild into a «Play House» and  interpreted the game in all its forms: board games, optical illusions, televised games, charade games, casino, and a musical quiz, just to name a few things that played with our senses that night. When I arrived, I was greeted by my name by the concierge in the courtyard. Two sphynx-inspired ladies portraying the famous woman-headed lions of greek mythology were guiding us through the hallway up to the playrooms. 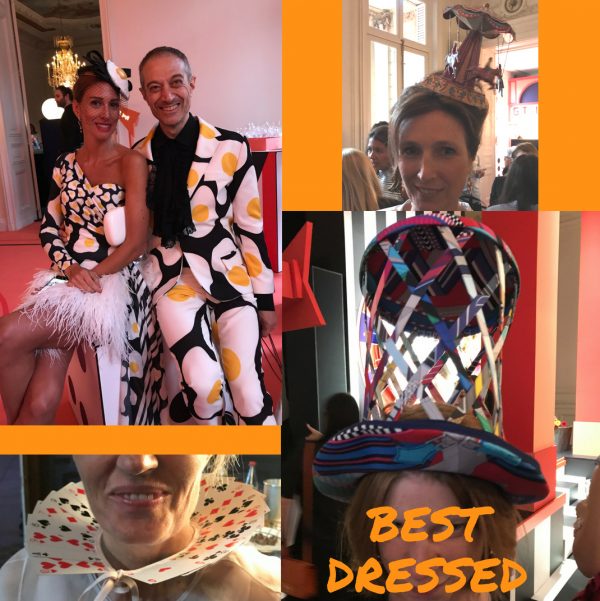 The dress code said «overdressed with a sense of humor» and everyone came up with the most amazing, hyper-elegant, extravagant, quirky looks.
It was definitely worth putting some effort in your outfit as the French brand spared no expense in showing its company theme «Let’s Play» by transforming the location into an immersive fun fair. Games were everywhere besides champagne and yummy food, both in the living rooms on the ground floor and the first floor. At each game, there were actors to explain the rules, to bring them to life, to hand out little nuts… This Hermès Fantasy was equipped with all of the elements you could possibly imagine: from a wheel of fortune to roulette, from an area where you could play «sit and run» to skittle dog. 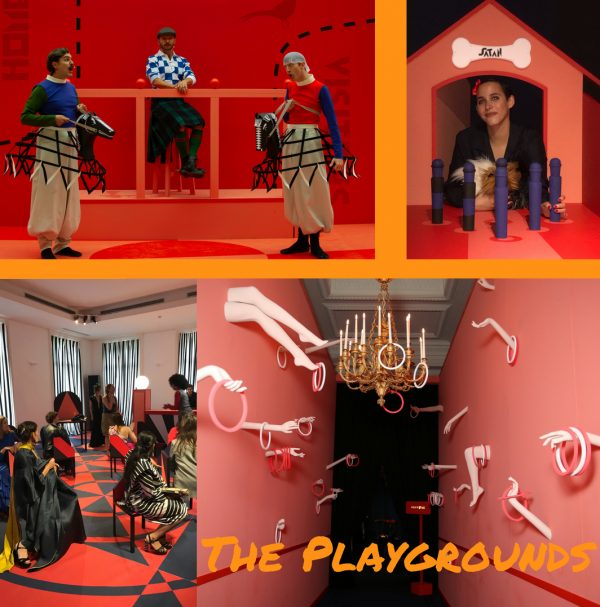 «We are a traditional company of craftsmanship and a creative company of today,» noted Hermès CEO Axel Dumas. Even he – a sixth-generation scion of Hermès founder Thierry Hermès – isn’t immune to the brand’s playfulness. 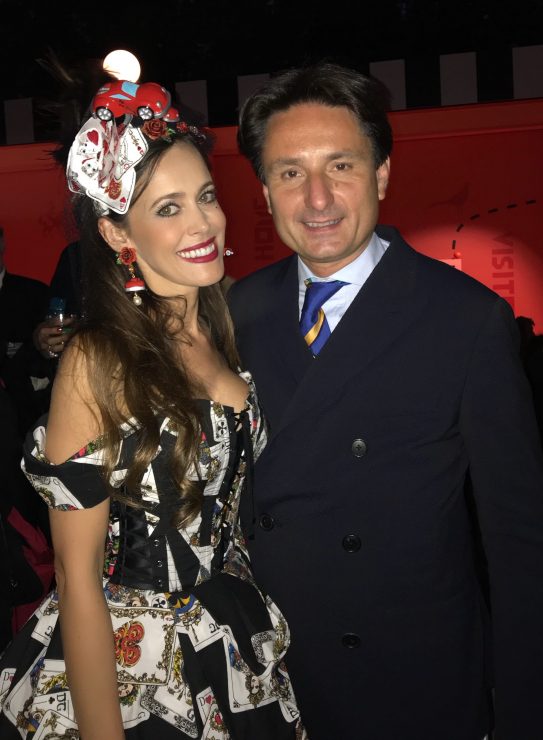 Stay tuned for the detailed outfit post to follow about my playing cards-inspired look and enjoy more impressions of this fantastic night below. 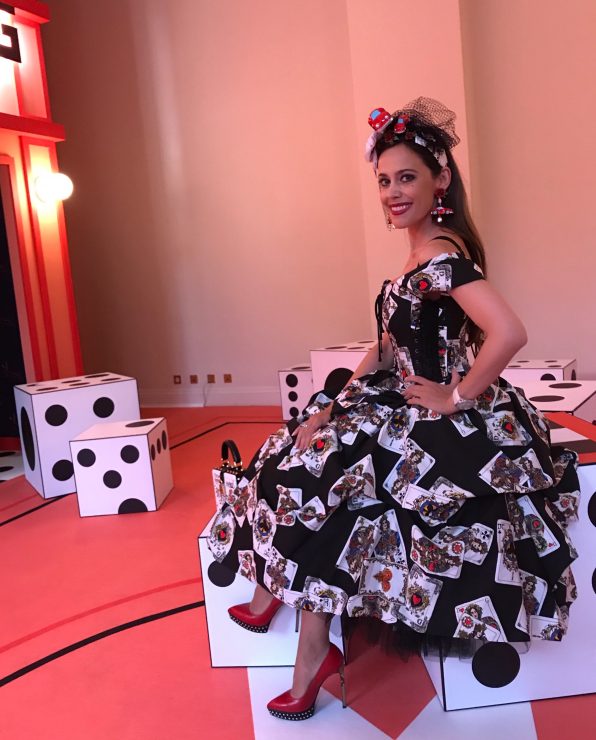 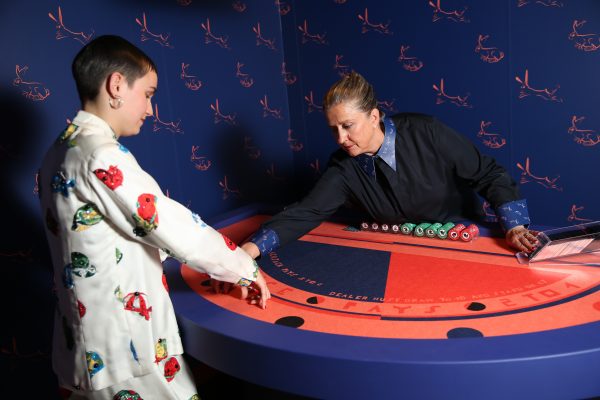 Get lucky or die trying 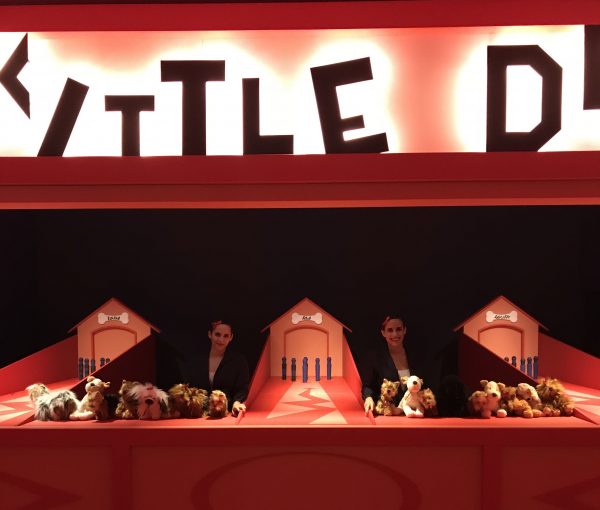 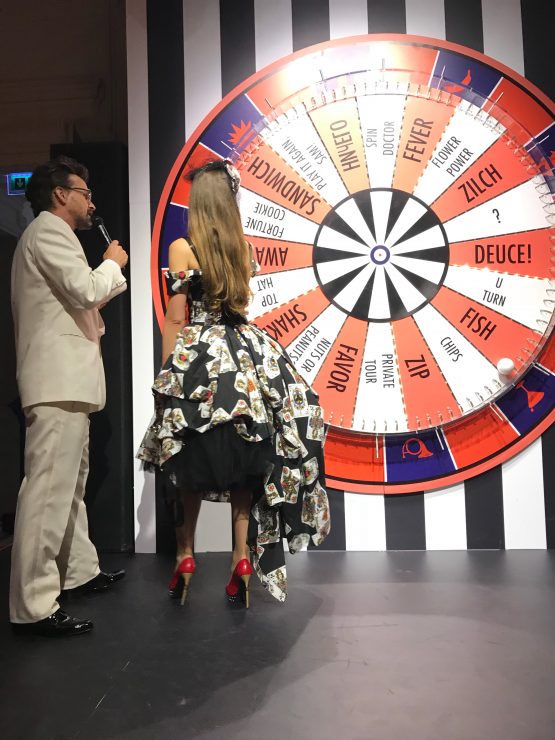 So much fun to play musical quiz. 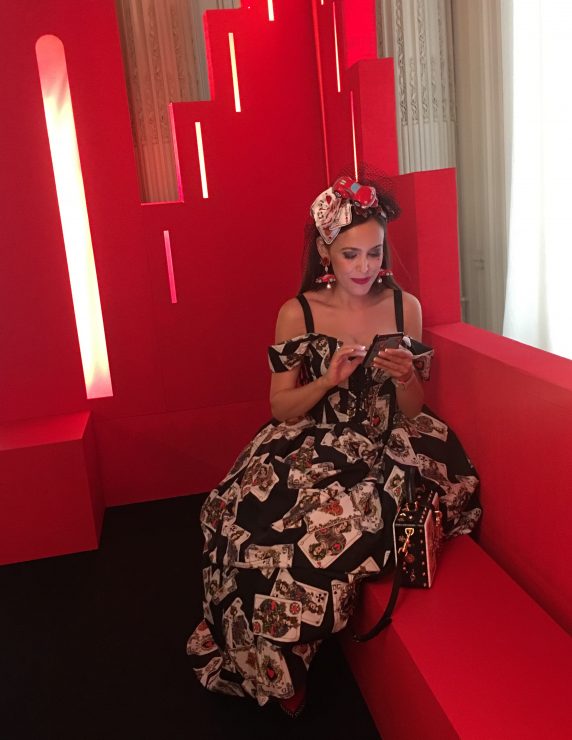 A huge thank you to Françoise Garnier, Hermès Switzerland, for inviting me and for taking all the photos! We had such a great time together. 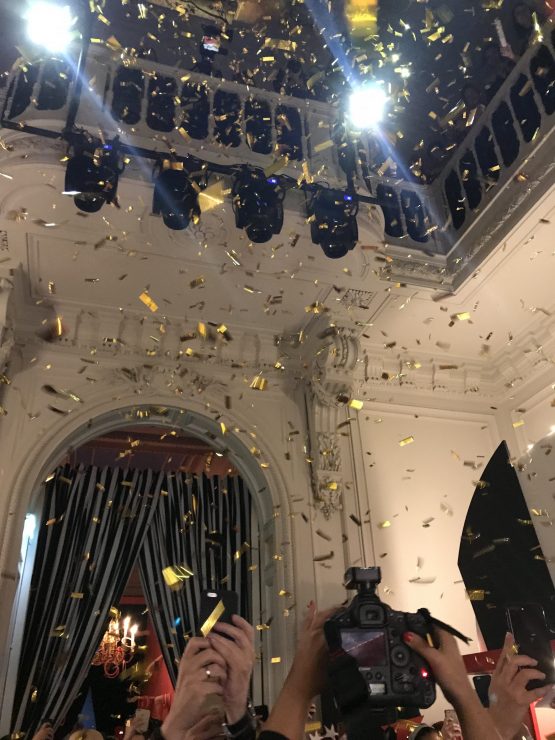