Last night, fashion’s most anticipated yearly event (yes, hotter than the Oscar’s), the MET GALA, offered a breathtaking red carpet that I will tell you all about today. It always takes place on the first Monday in May. But if you’re not an industry expert, you might be wondering why on earth there should be so much hype about it. First of all, Anna Wintour is hosting the night along some well-known co-hosts, which are all much-worshiped by the paparazzi: Amal Clooney, Rihanna, and Donatella Versace. But there is more… many stars, models and fashion designers attend the night in showstopping outfits worthy of unforgettable photos.

It is a huge night for fashion fundraising as it is dedicated to New York City’s Metropolitan Museum of Art’s Costume Institute – formally named The Anna Wintour Costume Center, in homage to the American Vogue’s editor-in-chief, who has been a chair member of the museum’s gala since 1995. It also celebrates the opening of the newest exhibition of which its theme sets the tone for the event and invitees have to dress accordingly. Personally speaking, I find this year’s motto extremely interesting, instead of being dedicated to the work of one designer, it is inspired by the dialogue between fashion and the masterworks of religious art: «Heavenly Bodies: Fashion and the Catholic Imagination». 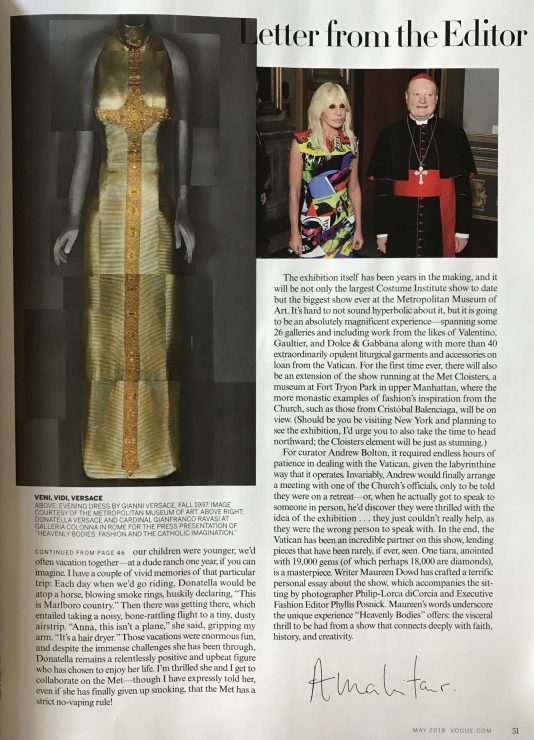 In Anna’s recent «Letter of the Editor» in the May 2018 edition of US Vogue, she writes: «The exhibition itself has been years in the making, and it will be not only the largest Costume Institue show to date but the biggest show ever at the Metropolitan Museum of Art. It’s hard to not sound hyperbolic about it, but it is going to be an absolutely magnificent experience – spanning some 26 galleries and including work from the likes of Valentino, Gaultier, and Dolce & Gabbana along with more than 40 extraordinarily opulent liturgical garments and accessories on loan from the Vatican.

For curator Andrew Bolton, it required endless hours of patience dealing with the Vatican, given the labyrinthine way that it operates.»

Central to the conversation will be the papal garb on loan from the Sistine Chapel sacristy, many of which have never been seen outside the Vatican, even in the 1983 Met blockbuster, «The Vatican Collections: The Papacy and Art». 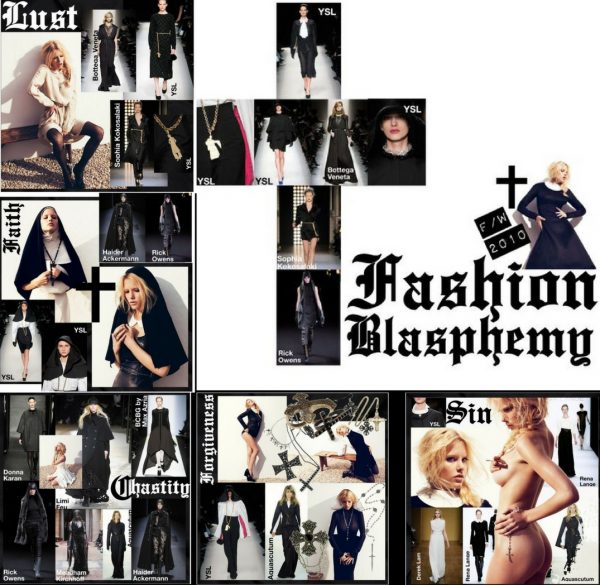 An enduring influence of religion on fashion: for F/W 2010, church elements played a huge role on the catwalks. Have a look at this previous post: The Nun’s Story.

The display of these extraordinary ecclesiastical pieces will highlight the enduring influence of religion and liturgical vestments on fashion. Among the 150 or so ensembles that will be on display are pieces by Cristóbal Balenciaga, Coco Chanel, who was educated by nuns, and John Galliano, whose transgressive F/W 2000 Couture collection for Christian Dior opened with a mitred, incense-swinging pope-like figure who proceeded down the runway to a voice intoning: «Understand the concept of love.» 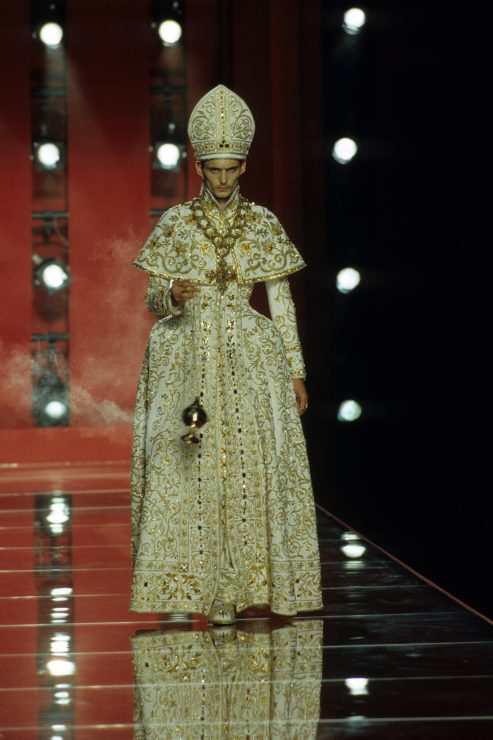 Fashion is a way to express yourself and by placing clothes within the context of religion, you realize how much power the looks of Christianity have and that fashion has supported the way we feel the Catholic imagination.

Part of the exhibition
Left: Fragment of a floor mosaic with a personification of Ktisis, Byzantine, 500–550, with modern restoration, marble, and glass; right: Ensemble, Dolce & Gabbana, F/W 2013 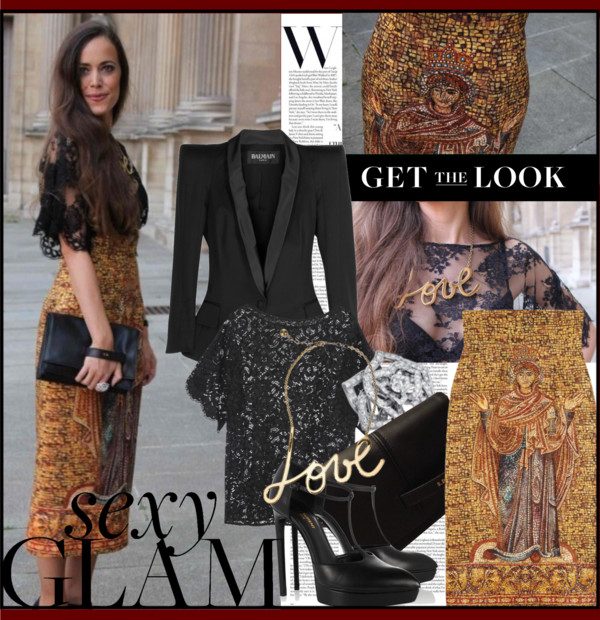 «Heavenly Bodies: Fashion and the Catholic Imagination» is on view May 10–October 8, 2018. A catalog with photographs by Katerina Jebb will accompany the exhibition.

Below you can enjoy some of my favorite looks of last night.

My personal winner: Blake Lively in Atelier Versace
She needed to arrive in a party bus to have enough space for her amazing gown! 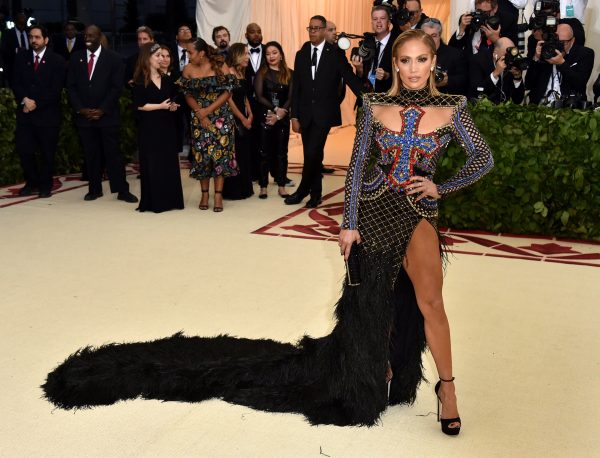 Rare moment: The host of the night, Anna Wintour, caught smiling in Chanel. 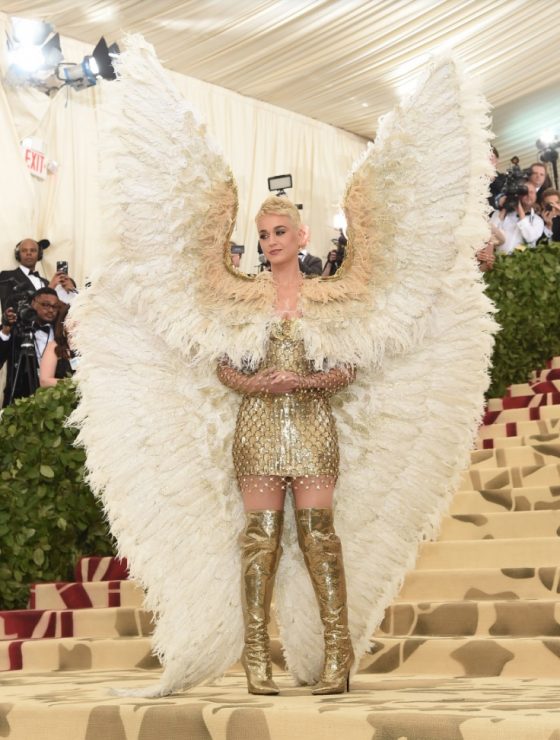 Angel of the night: Katy Perry in Versace. 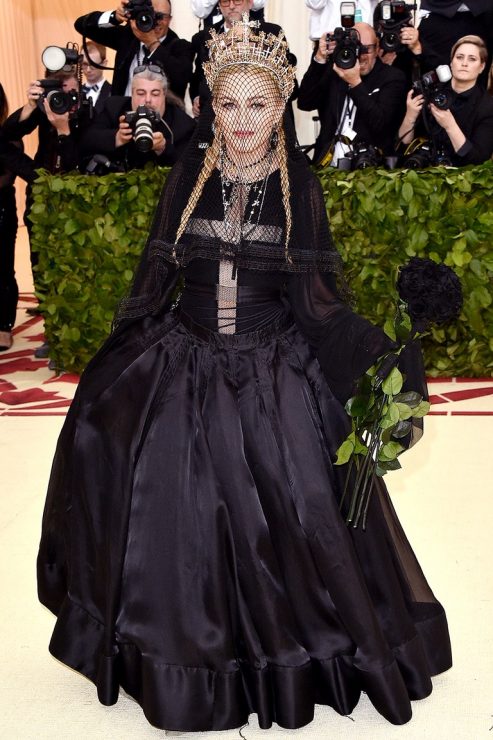 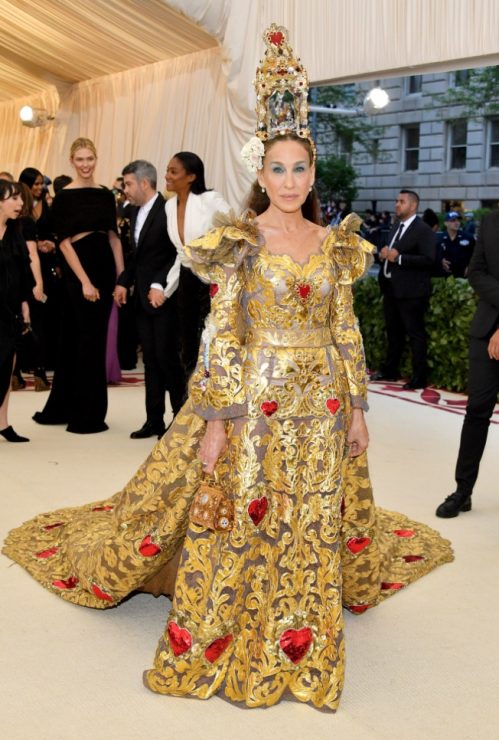 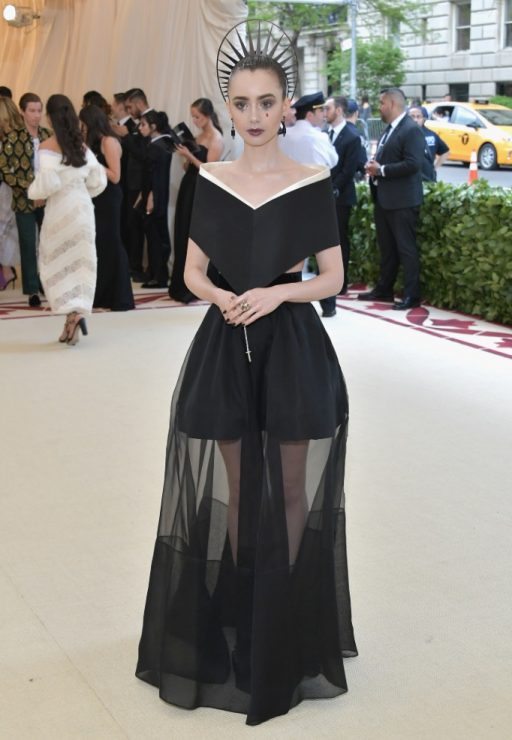 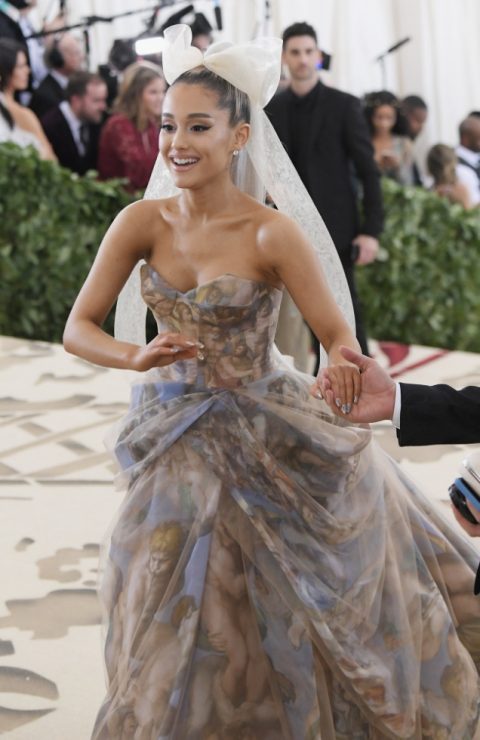 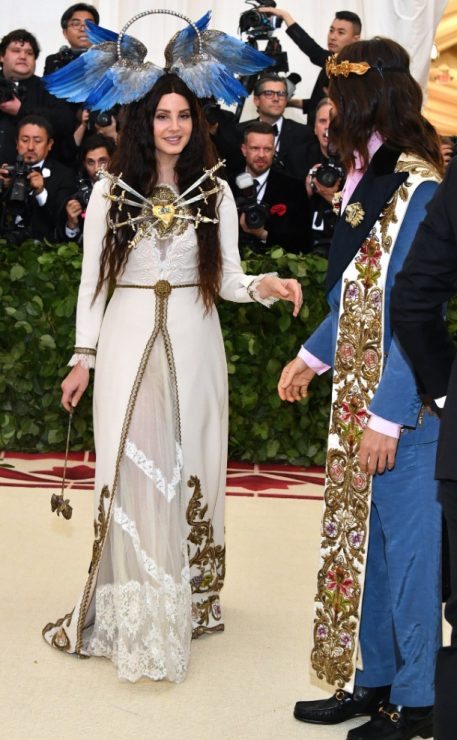 Lana Del Rey and Jared Leto, both in Gucci 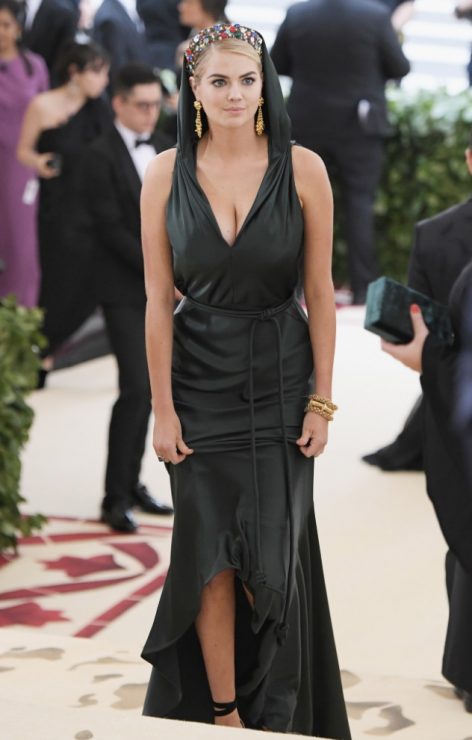 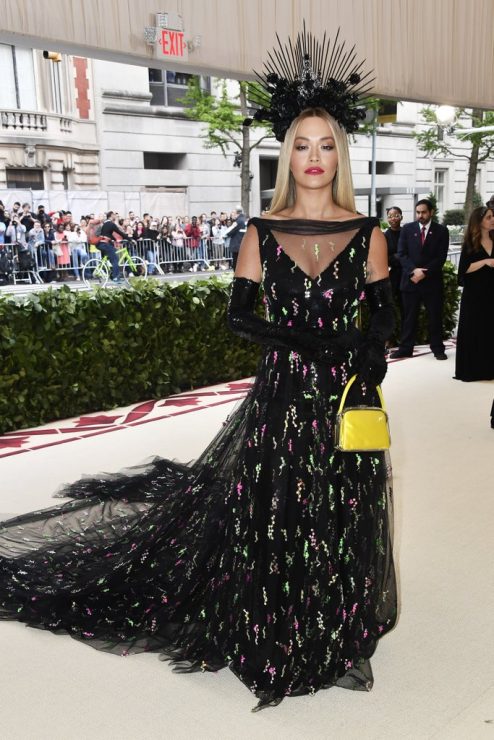 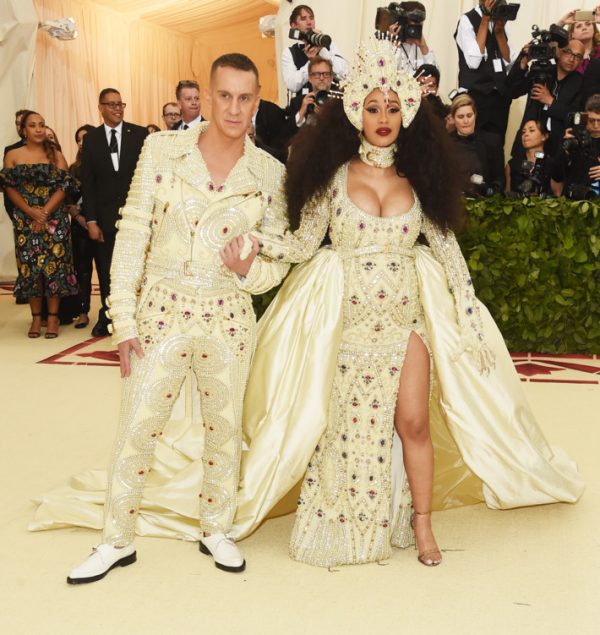 So cute: Cardi B shows off her baby bump in Moschino next to designer Jeremy Scott. 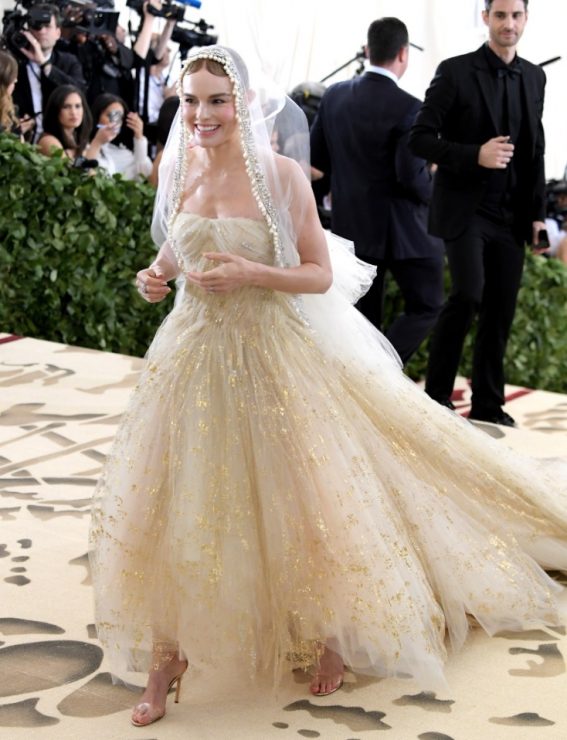 Definitely not the most sexy look, but matching the theme well: Greta Gerwig in The Row. 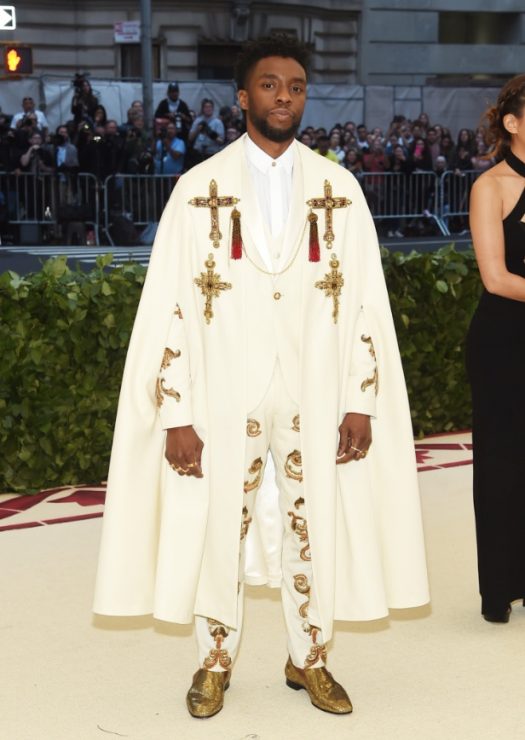 Best dressed man of the night: Chadwick Boseman in Versace. 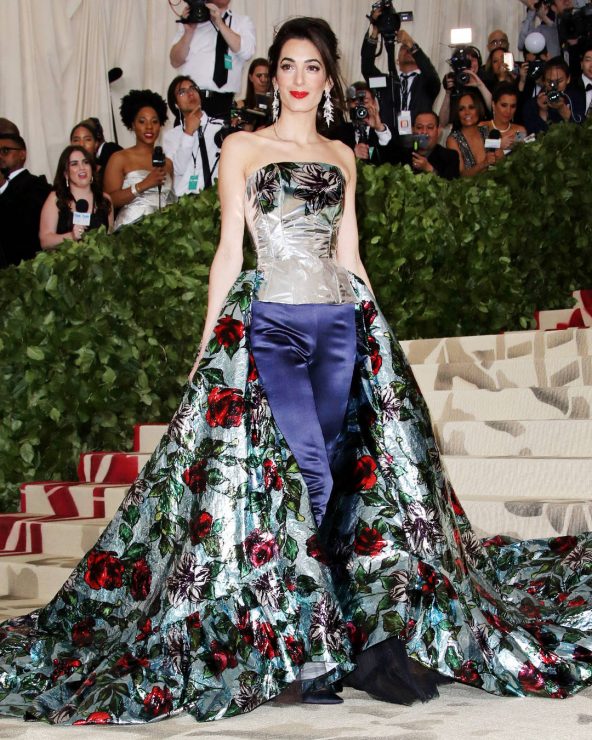 I personally didn’t like this look at all, not matching the theme (as a co-host you would expect better) and the cut is not pleasing her beautiful shape: Amal Clooney in Richard Quinn.