Finally I can reveal the exciting news: I am flying to New York tomorrow morning to walk the runway myself during Mercedes Benz Fashion Week.

Polyvore and Covergirl have teamed up for an amazing fashion show to present the collections of four up and coming FIT graduates. “Prominent fashion bloggers” will walk the catwalk and I am so excited to be among them. The Polyvore Live runway show also will stream live on Polyvore.com, offering virtual access to more than 13 million people across the globe. 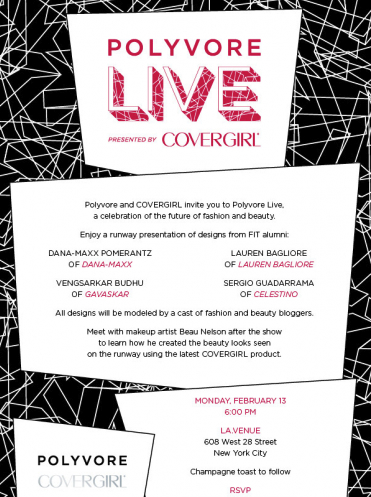 Here are the four FIT alumni designers that were selected by Polyvore and FIT’s Alumni Affairs:

1 – Lauren Bagliore received a BS in Fashion Merchandising Management in 2005, after which she worked at Vivienne Westwood, Zac Posen, Libertine, Tod’s, and Paul Hardy. Bagliore recently established her own clothing line, Lauren Bagliore Design House. Her designs are noted for their draping and unique combination of edgy yet wearable sensibilities.

2 – Vengsarkar Budhu received a BFA in Fashion Design in 2006. Specializing in eveningwear, he was selected by Reem Acra as the critic award winner for special occasion wear in FIT’s annual BFA Fashion Show. Budhu has started his own eveningwear label, GAVASKAR.

3 – Sergio Guadarrama received a BFA in Fashion Design in 2008. While still a student, he launched his label, Celestino. In 2008, he won “The Best in Class – Execution” in the FIT Supima Design Competition. In 2010, he served as a critic for the annual FIT BFA Fashion Show, along with a group of designers that included Calvin Klein and Carolina Herrera.
Sergio is known for his uncanny ability to create season-less eveningwear and has crafted gowns for the Metropolitan Opera.

4 –Dana-Maxx Pomerantz received a BFA in Fashion Design in 2005. After working for Betsey Johnson and Marc Jacobs, she established her eponymous clothing line, Dana-Maxx. She was selected as one of Women’s Wear Daily’s “Hot New Designers” and was featured on ELLE Magazine Creative Director Joe Zee’s hit television show, All on the Line.