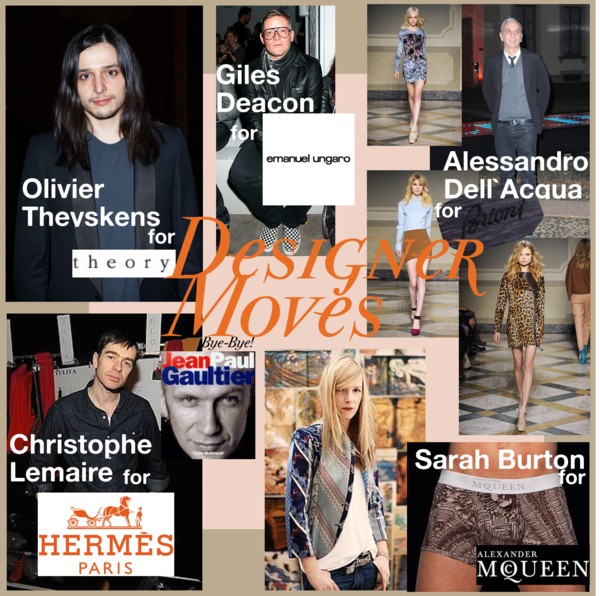 There was a lot of movement in the fashion world during the last days, some very interesting announcements were made. The probably most unexpected one is Jean-Paul Gaultier`s departure from Hermès seven years after his jump-start of the house`s ready-to-wear line in 2003. If the reason was the  seven-year itch or the death of former president and chief executive, Jean-Louis Dumas a few weeks ago, we will never find out. Fact is that Christophe Lemaire, the designer behind the resurgence of Lacoste, is headed to Hermès and will present his first collection for F/W 2011 next spring.
Gaultier is reportedly leaving to focus on his own collection of which 45%  is still owned by Hermès. Like a real divorce… somebody is always keeping a stake.

The second news was not so surprising for me. After different speculations over the future of the Alexander McQueen brand, the creative director has officially been named. Sarah Burton, who had worked alongside McQueen for sixteen years and oversaw the completion of the F/W 2010 collection after the designer`s death in February will definitely keep his spiritual heritage.
The first McQueen underwear collection for men will launch in June. Might be a nice gift for your boyfriend or hubby.

Finally we have two more designers who landed themselves a job. First, former wunderkind Olivier Theyskens, who worked for Rochas and Nina Ricci, will design a capsule collection for Theory that will be released next spring.
And last but not least, Alessandro Dell`Acqua is making a return to fashion with a new collection dubbed N°21( his lucky number), after having lost trademark rights to his namesake line last year. Moreover he will take reigns at Brioni and design their womenswear.

Somebody else seems also ready for a fresh start: Giles Deacon has been confirmed as Emanuel Ungaro`s new creative director. After tumultous times and the Lindsay Lohan episode, the French fashion house will try to skyrocket right up to the point where Balmain and Balenciaga already are. One thing is certain, Ungaro has a fancy name and a lot of potential. Let`s see if Deacon along with the help of his stylist friend Katie Grand can come up with some zesty ideas.