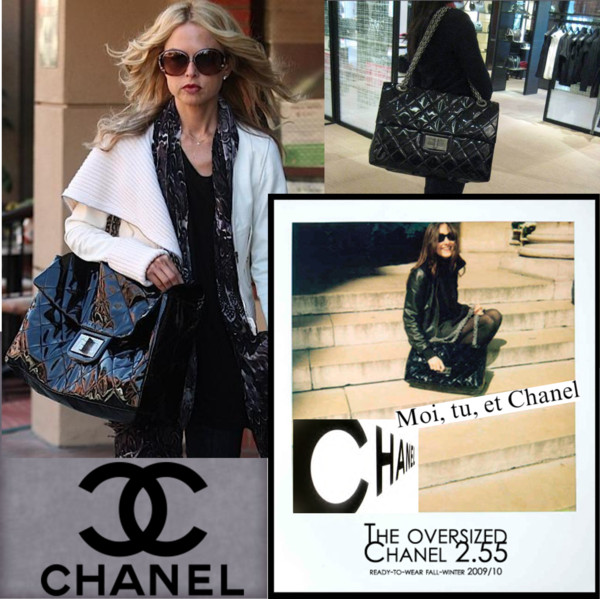 After my last Tuesday post, I have received so many e-mails from you asking me about my XXL Chanel bag that I wore on one of the photos.

The very large version of Chanel`s iconic 2.55 bag was presented last F/W 2009/10 for the first time in black vernis leather and was spotted immediately on stylist Rachel Zoe. For S/S 2010 the oversized model has appeared once more in grey denim but only a very limited number was produced. I am totally in love with this bag. It gives me a this “Alice in Wonderland” feeling being so big compared to my stature.

The story behind the legendary bag that has always been en vogue is magical. The 2.55 takes its name from the month and year when it was launched by Coco Chanel: February 1955. Her idea was to create a shoulder bag to free up her hands. The traditional hand-held bags were simply no longer practical. Therefore her introduction of the chain strap revolutionized fashion of its time.

In 2005, in celebration of the 2.55`s 50th anniversary,  Karl Lagerfeld (Chanel`s designer since 1983) revived the bag exactly as Coco Chanel had made it and launched the Reissue. As a new member of the traditional Chanel 2.55 family, the updated version has got a turn clasp (Chanel term: Mademoiselle Lock) instead of the classic interlocking CC closure introduced in the `80s (Chanel term: Classic Flap) and a chain strap without the interwoven leather accent. Both variations are available each season in many different ways. 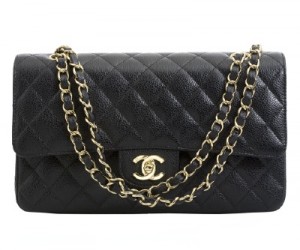 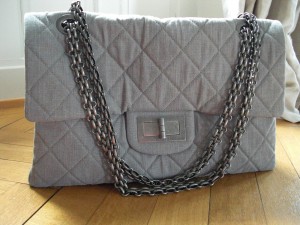 Interesting to know is that the bag arrives folded into the stores and can be packed like this for travelling which makes it very convenient (see photo to the left). It is said that Karl Lagerfeld found one of Coco`s previous 2.55 models on a shelf, squeezed together between some books. As the shape of the bag was still in perfect condition, he has adopted that idea for his relaunch. 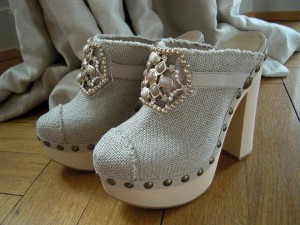 In case those bags are appealing to you, go to the nearest Chanel store and have a look. If you are there, please do not miss out this summer`s It- shoes:
Chanel`s “5 O`clogs” (love that name) are the hottest ones of all.

To me, Coco Chanel deserves the Nobel Prize post mortem. We owe her the LBD (Little Black Dress), stretch materials, pants and the chain strap. By banishing the corsets, she has been the pioneer of modern wearable womenswear. Thanks, Coco!

Photos: © Sandra Bauknecht and via missylovely