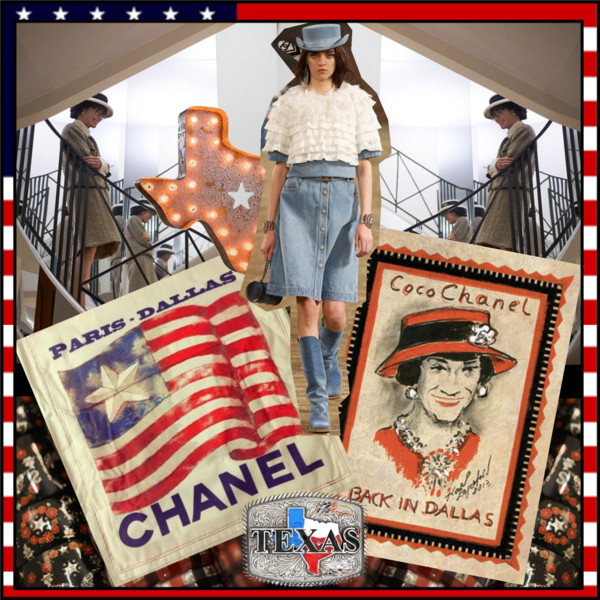 The invitation sketched by Karl Lagerfeld read, “Coco Chanel back in Dallas” and he took it literally. His fashion show for the Pre-fall 2014 Métiers d’Art collection titled “Paris-Dallas” took place last Tuesday at Dallas Fair Park, a historical venue with art-deco architecture that is located in the heart of the Texan city.

This event was the occasion to celebrate the strong bond that linked the French designer to the US. “I admire and love America. It’s where I made my fortune. For many Americans (…), I am France” stated Gabrielle Chanel, cited by Paul Morand in his book, The Allure of Chanel. 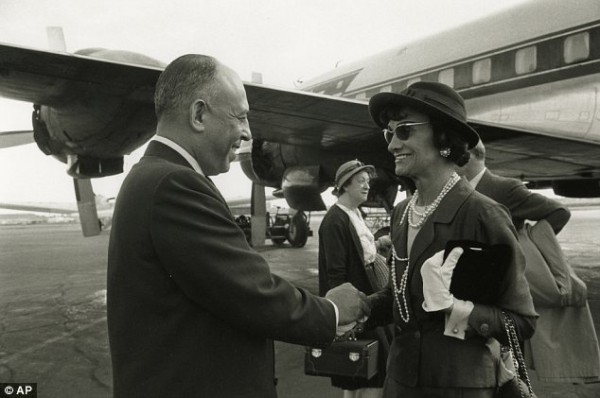 The climax of this mutual passion dates back to 1957, when Coco Chanel – accompanied by a delegation of 125 people from France – landed on October 14th at the Dallas airport. Stanley Marcus, co-founder of the Neiman Marcus store, awarded her with the Neiman Marcus Award for Distinguished Service in the Field of Fashion, the “Oscar of Fashion”. That year, the designer of rue Cambon is the only winner among the 300 fashion designers invited, an indication of the importance she holds in the hearts of Americans.

Gabrielle Chanel and Stanley Marcus during her visit in Texas

During her twelve-day Texan journey, Gabrielle Chanel dazzles the crowd to the point that Time Magazine reports the event by titling it “Dallas in Wonderland”. Fifty-six years later, Karl Lagerfeld returned to Dallas and retraced this journey that sealed the French-American love story of the designer with the people seduced by the modernity of her creations.

To celebrate the occasion, Karl Lagerfeld directed a short movie titled ‘The Return’ in which he shows Coco Chanel’s incredible return to center stage in December 1953 when the designer reopened her Haute Couture house after fifteen years of absence. The collection was welcomed by the French press with an icy silence as Dior’s 1947 New Look, cinched at the waist, had taken over the fashion hype. Only the American media supported the looks that defined the rebirth of Chanel’s style. ‘The Return’ retraces this determining period, that shaped the legend of the designer of rue Cambon forever. 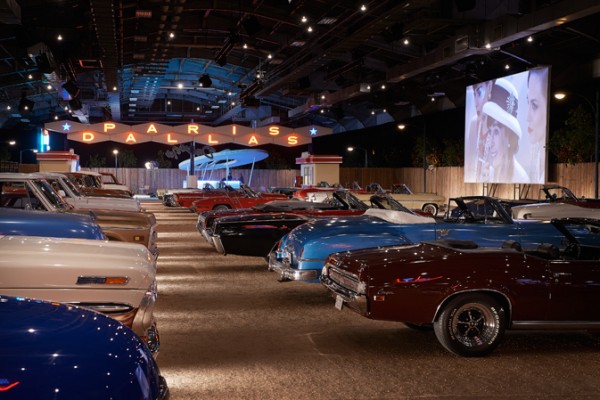 The drive-in for ‘The Return’ screening before the show

Chanel’s Métiers d’Art collections are designed to showcase the amazing and outstanding craftsmanship of the ateliers that the House of Chanel has acquired to preserve over all those years. Personally speaking, I admire Karl Lagerfeld for his creativity that never uses an element the way it is meant to be. He transforms cowboy boots into wider versions, plays with texture so that laminated jersey looks like shiny leather and brings Native American details into the modern world.

Enjoy the photos of this absolutely fabulous collection! My favorite is this dark star-spangled gown, an ode to the ’30s with the right edge of a Texan cowboy girl! So, ladies, that’s what y’all are wearin’ next fall! 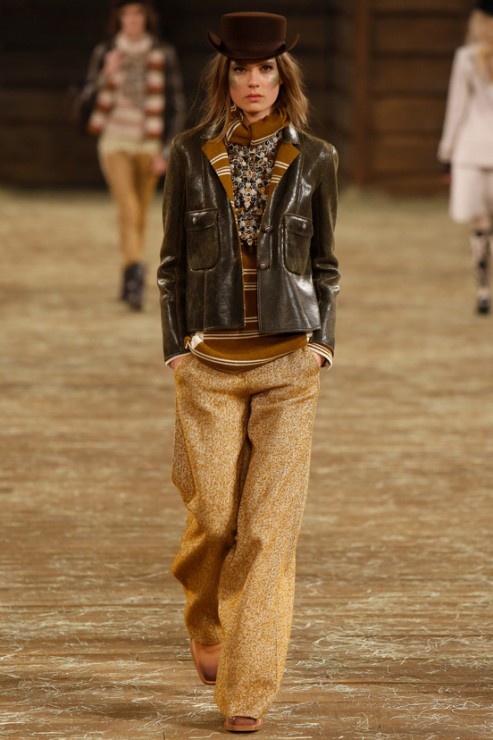 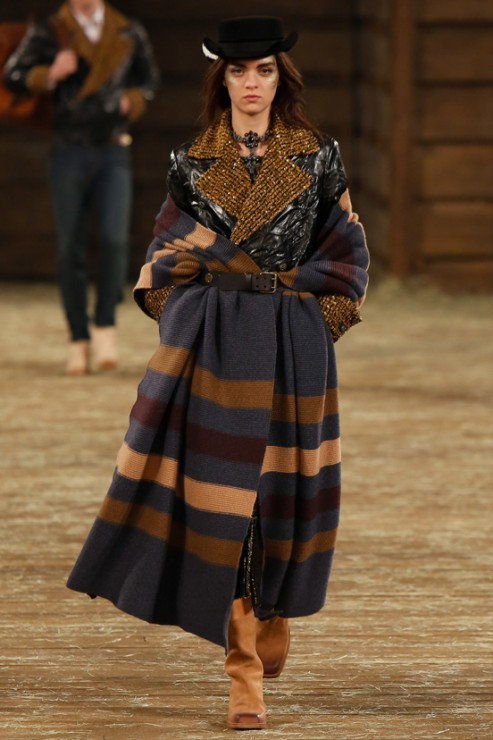 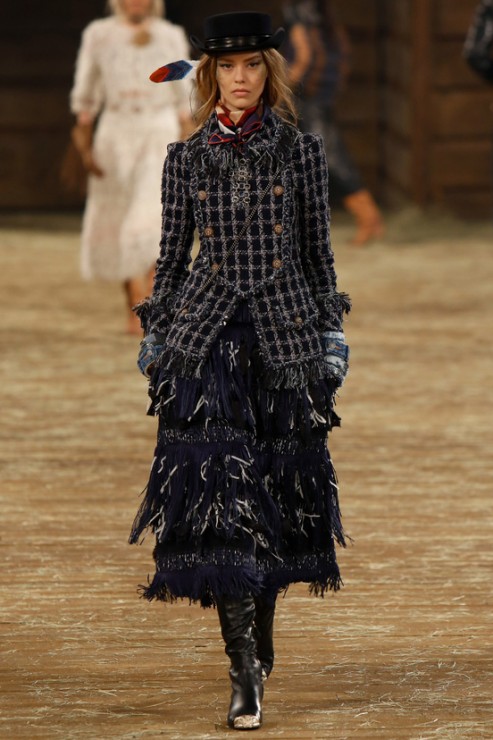 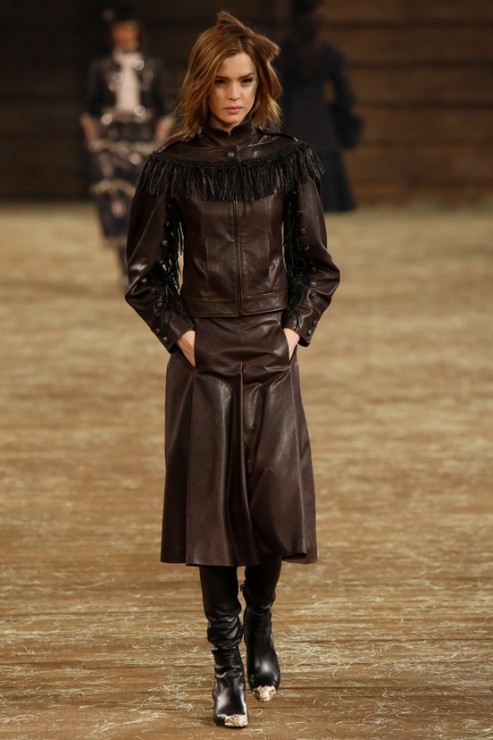 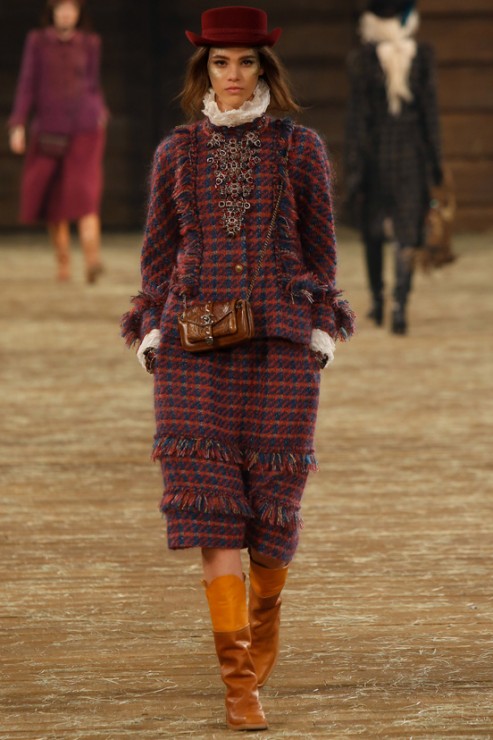 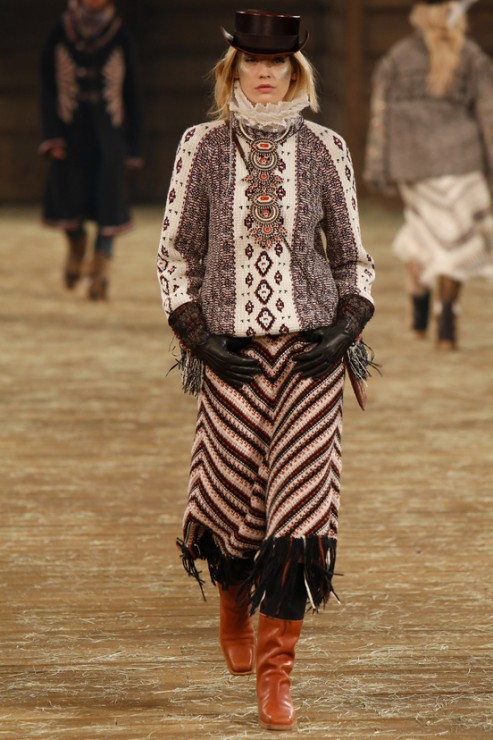 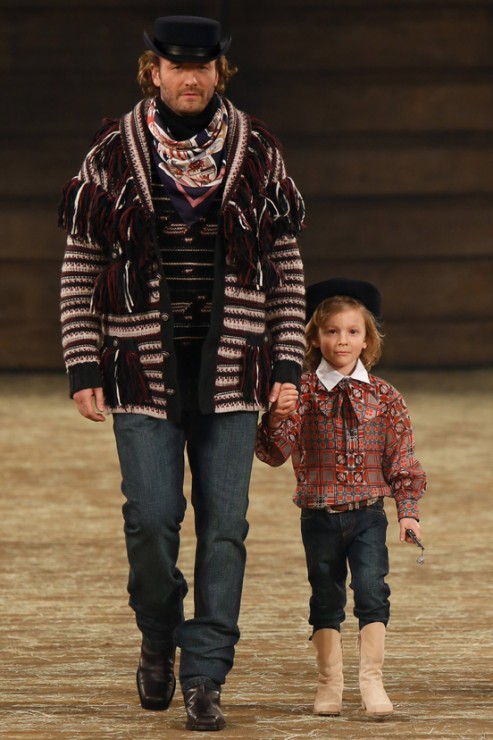 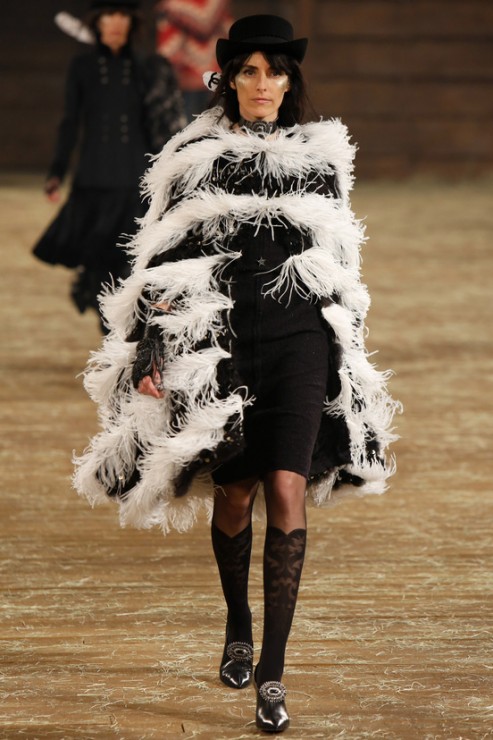 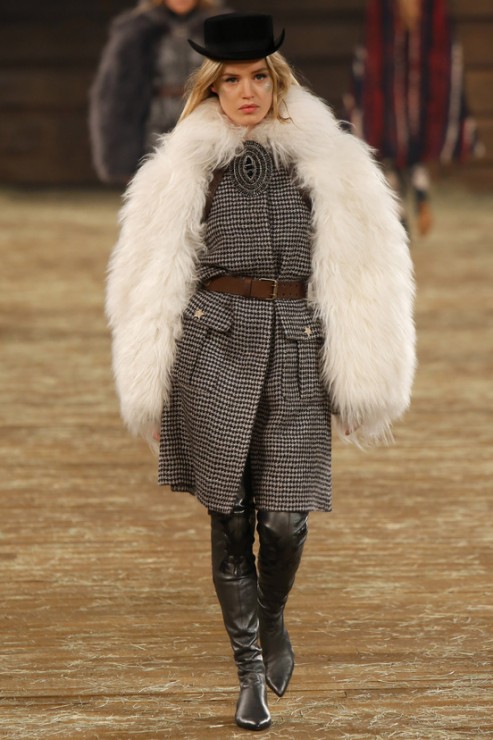 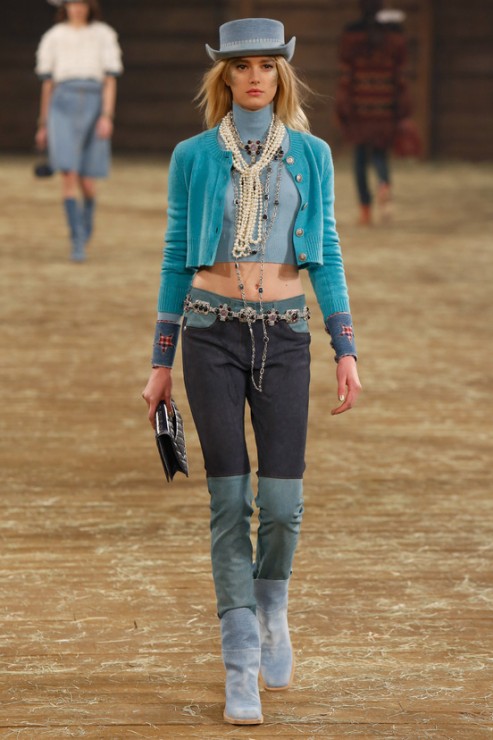 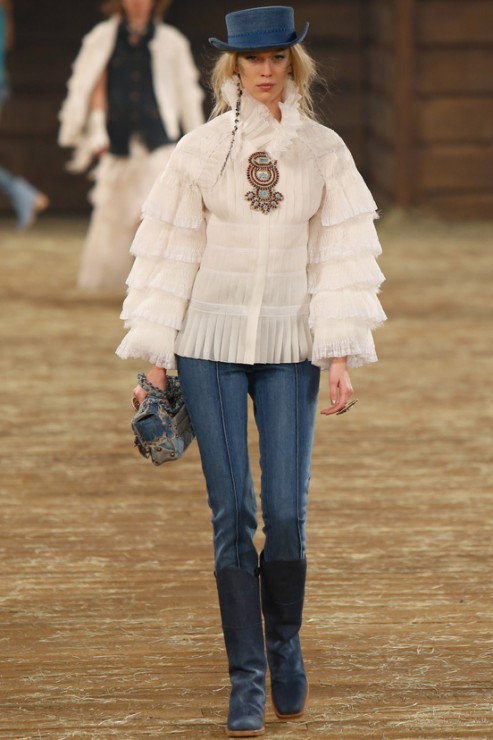 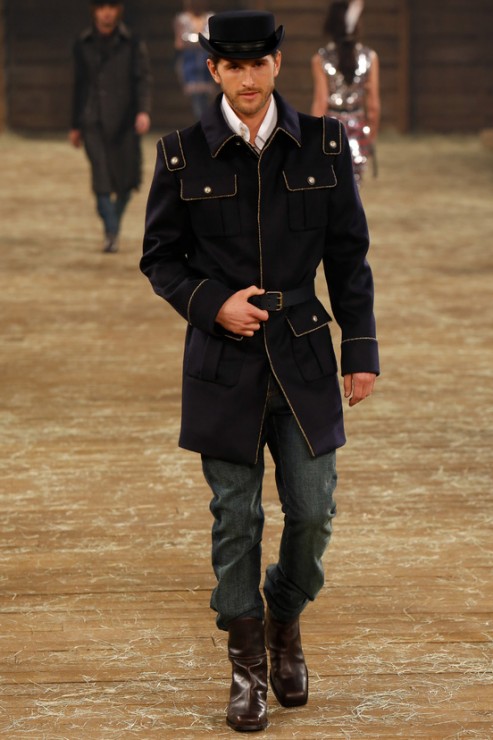 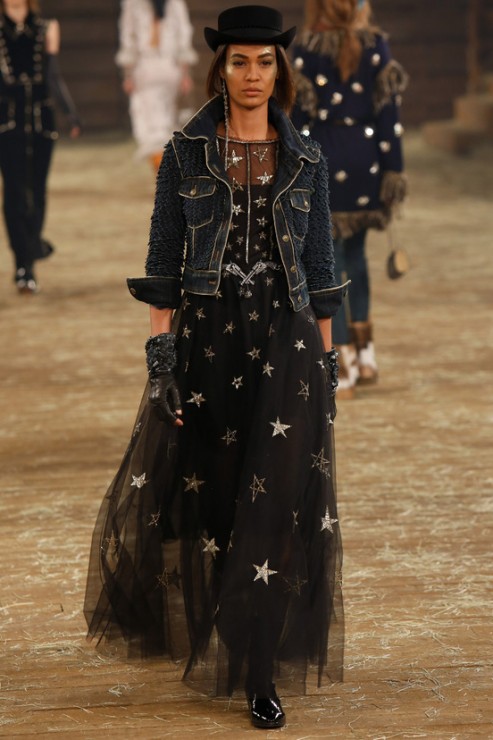 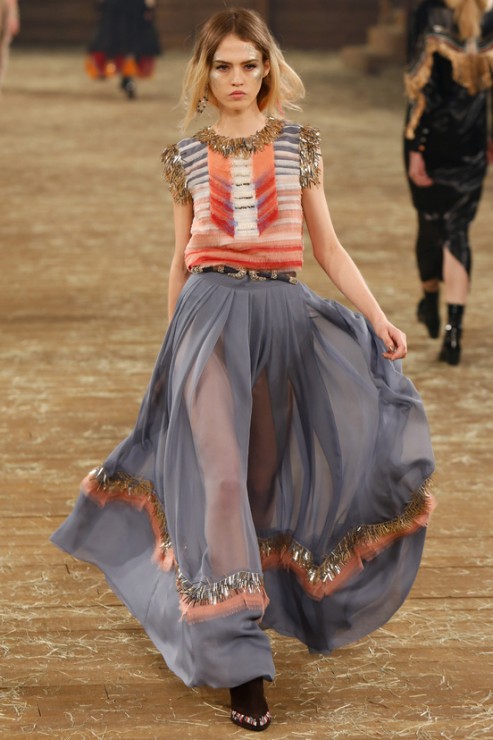 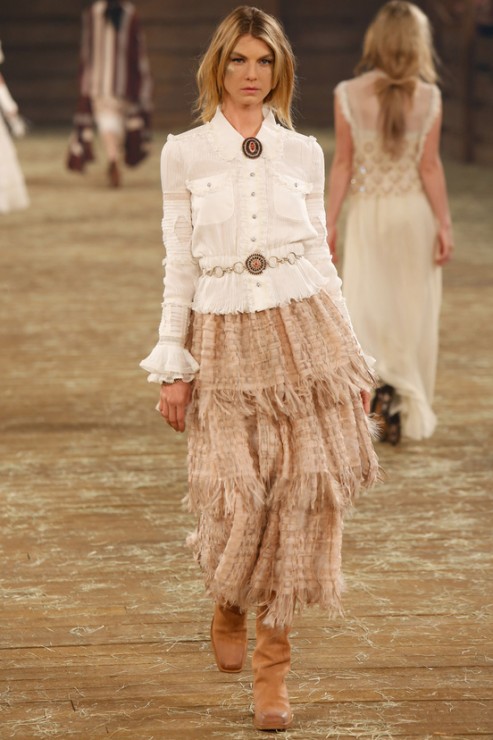 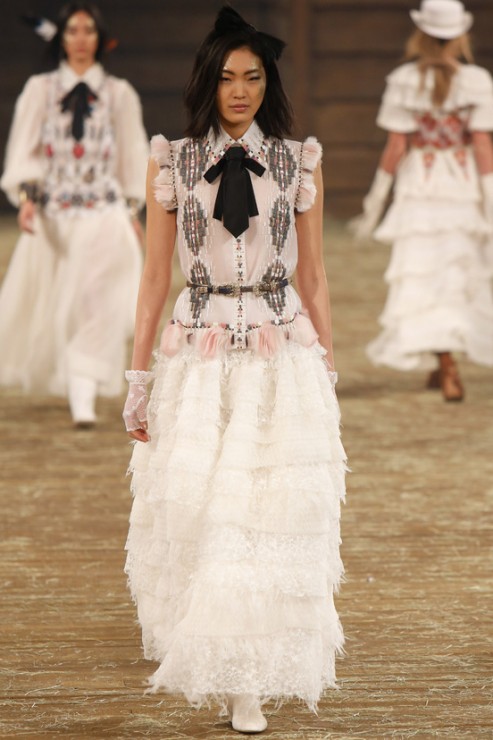 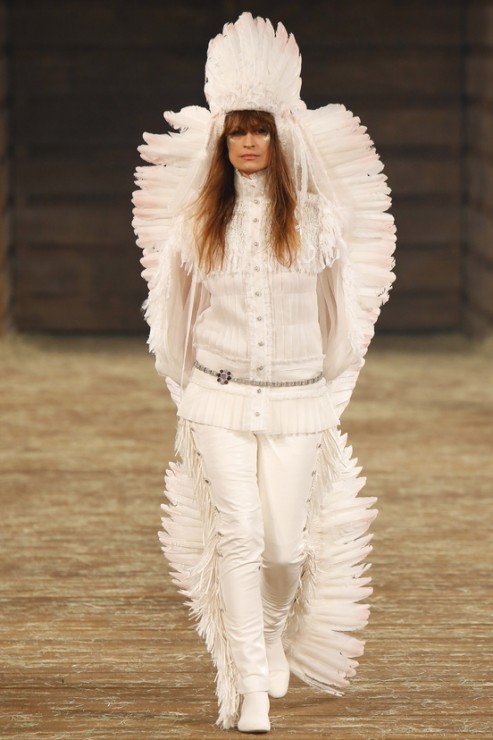 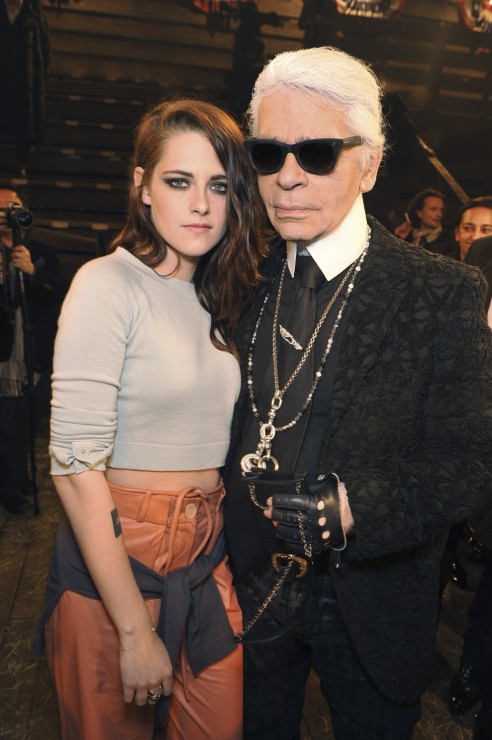 Karl Lagerfeld has chosen Kristen Stewart, who attended the show last Tuesday, to be the face of the upcoming campaign of the Pre-fall 2014 Métiers d’Art “Paris-Dallas” collection. I have to say that the American actress is not my favorite choice… but I am sure that Karl Lagerfeld will surprise us with something different once more.