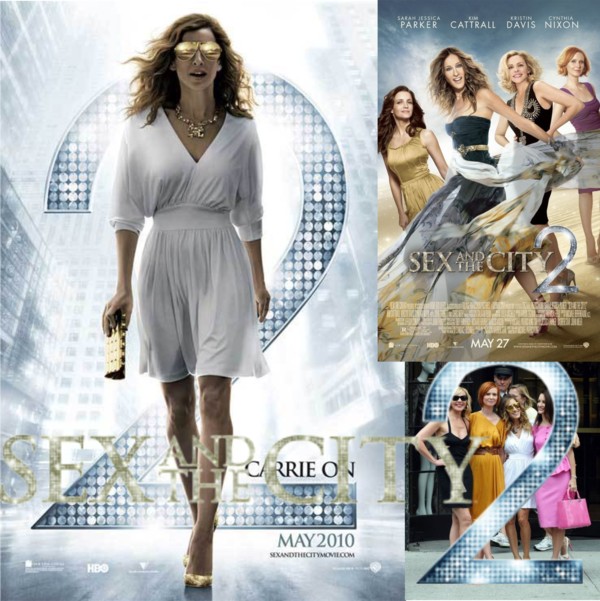 Sex and the City 2 hits the theaters next week on May 27. Enjoy my insight into the much discussed, long-awaited movie that is a must for every fashionista. 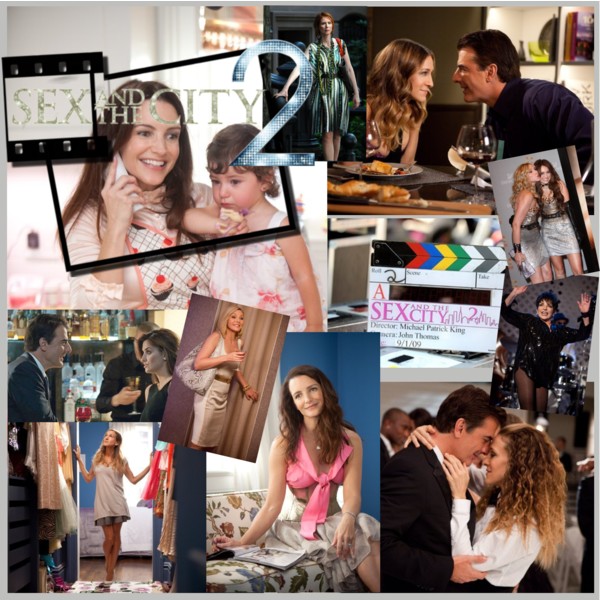 What happens if you say yes? It is two years later, Carrie is living the life with Big which lost a little its sparkle, Samantha has become a pill-addicted, Charlotte is struggling with the pressure she is experiencing as a mother of two, only Miranda seems to cope with her life as a  mom and a professional woman. Still all girls look fantastic in their to-die-for outfits once again put together by famous stylist Patricia Field. Guest stars are Penelope Cruz, Liza Minelli and “Hannah Montana” actress Miley Cyrus. 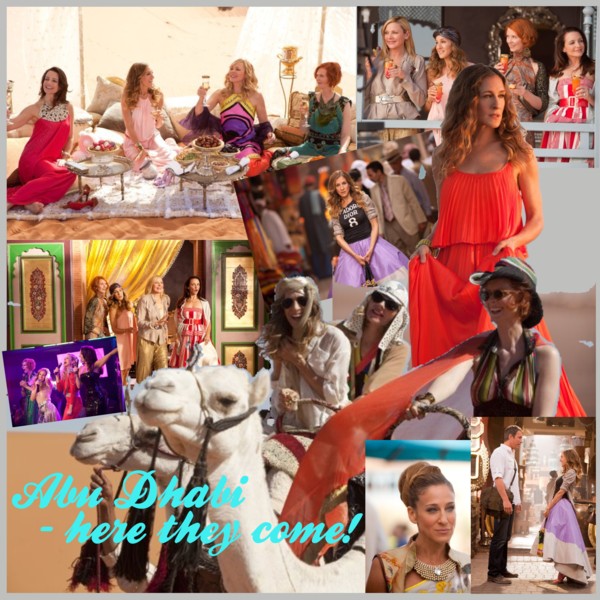 A little excitement comes in when the girls jump at a chance for an all-expenses-paid trip to Abu Dhabi. The glamorous, sun-drenched adventure surprises with some mysterious coincidences like Carrie bumping into her ex Aidan. The desert looks are so vivid, luxurious and divine. Fashionistas, grab your turbans! 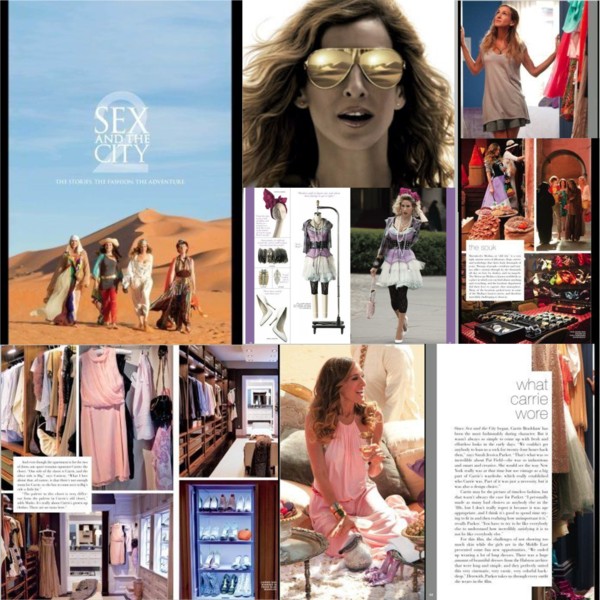 Last week, the book to the movie “Sex and the City 2 – The Stories. The Fashion. The Adventure” was released. It is a great buy as you can find most of the foursome`s outfits with detailed descriptions. 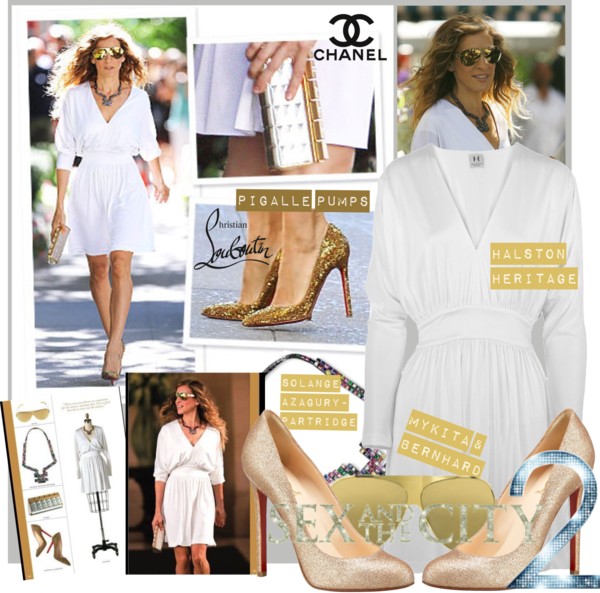 Here you have a preview of the probably two most successful looks of Sex and the City 2,  available now. Both dresses are from Halston Heritage. Altogether Carrie is wearing six of them in the sequel. The reason might be that Sarah Jessica Parker is now the Creative Advisor for the legendary American label. 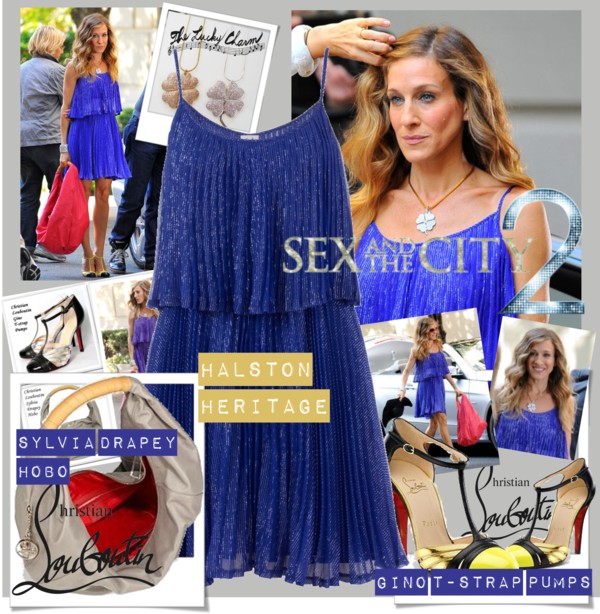 Founded by Roy Halston Frowick, Halston had its golden age during the Studio 54 era. In 2008, the brand was relaunched and in 2009, its hip diffusion line Halston Heritage followed. I am a big fan of this effortless chic. After seeing Carrie and her style-setting looks, I am sure that there will be a lot more Halstonettes out there.
If you like the “lucky charm” clover necklace, you can order it at Patricia Field`s online store from $56-$72. Absolutely funny is the 80`s retrospective in the movie. Carrie in her Madonna-inspired outfit still looks cute but Miranda…. that hairdo, ohmygod! The new must-have accessories will be sweatbands, preferably in neon colours. As spotted on Sarah Jessica Parker – just gorgeous!
Moreover for your evenings out, Skyy Vodka offers “cocktail couture” with a special designed SATC 2 bottle designed by Patricia Field. The hype has no end in sight. Bergdorf Goodman asked Patricia Field to style the windows of their department store on 58th street. Each of them celebrates a familiar Sex and the City moment. That is New York City! 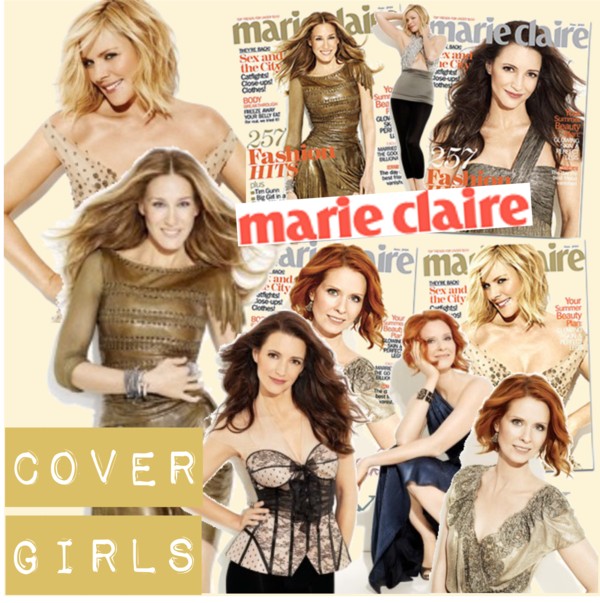 The four actresses are the cover girls for the recent June edition of American Marie Claire magazine. Get your issue now.

One last anecdote. The buzz began last summer when tons of fans followed the crew around the city to get the best views on the first location shoots. Rumors had it quickly that Samantha will tie the knot in the sequel after her appearance in a bridal gown. There had been many memorable weddings on the show. Think about Charlotte and Trey in the kilt, or that beautiful little ceremony between Steve and Miranda, not to forget Mr. Big and Carrie.

In case you thought Samantha would be the last girl to put the ring on it, you got duped. Kim Cattrall who plays the maneater Samantha had the devious idea to set the fans on the wrong track. There is going to be a ceremony indeed, but it will be a gay one between Stanford and Anthony. Carrie will wear a smoking, don`t you think that this is probably a little too cliché?! If you cannot get enough of Carrie, I recommend Candace Bushnell`s newest book. “The Carrie Diaries” is about the young protagonist as a high-school senior. A nostalgic look back, an addictive story and a nice way of getting to know our iconic “Sex and the city” fashionista a little better.