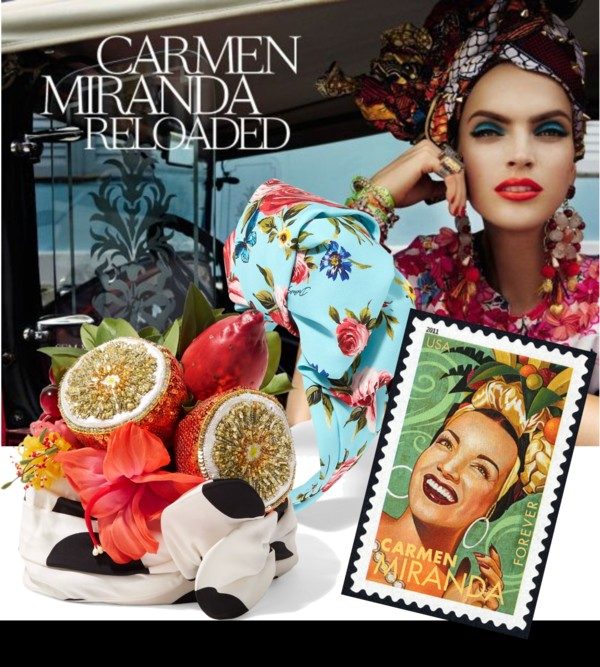 “I never followed what people said was in fashion. I think that women should wear what suits them. So I created a style that fitted my type and my artistic genre.”
– Carmen Miranda

The Portuguese-Brazilian actor and samba singer – and one of the first celebrity fashion designers – died over 60 years ago today. But her legacy remains …

Carmen Miranda’s name has become synonymous with frilly blouses, plastic fruit accessories and extravagant headpieces, items that were always essential to her larger-than-life look. Her influence on fashion had broader consequences too: the colourful aesthetic that made her a hit in Hollywood was controversial back home in Brazil.

Known for her tutti-frutti turban, A Pequena Notável, as she was known in her home country Brazil, or The Brazilian Bombshell, as they called her in the USA, did not just sing and dance. She also created the costumes for her Broadway shows and Hollywood musicals in the 40s and 50s, a period when she was the highest paid studio actress.

Born in Portugal, she moved to Brazil with her family when she was still a child. In 1925, as a sixteen year old in Rio de Janeiro, she discovered she had a talent for making hats and dresses while working in a clothing shop. She began to design and sew her own costumes when in 1930 she started singing professionally. As she was just five foot tall, she was also known for wearing platforms and making them very popular.

Many designers have been inspired by her tropical image over the last years but I truly adore what Dolce & Gabbana has come up with for the S/S 2017 collection:

This playful turban combines the label’s ‘Mambo‘ and polka-dot inspirations. Modeled after dancer Carmen Miranda’s iconic headpiece, this structured style is made from patterned stretch-silk and topped with flowers and colorful fruit appliqués. The internal brim is lined with a grosgrain ribbon to keep it comfortably in place.

By the way, Carmen Miranda’s original costumes were brought together by her sister in the Museu Carmen Miranda in Rio de Janeiro. A museum that is worth the visit if you love fashion as much as I do. Therefore I adore how Dolce & Gabbana also reinterpreted beautifully the singer’s iconic bow turbans:

is twisted at the front and patterned with pretty pink roses, blue butterflies and the label’s signature. Isn’t it so pretty?

To a tropical weekend…

Photos: Courtesy of Dolce & Gabbana, Bettmann/CORBIS and via Vogue Brazil